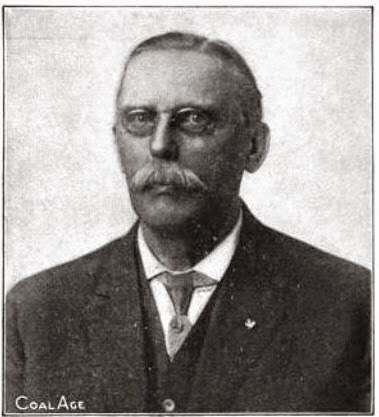 I cited William Haven (above) as the father of Lucas County's coal mining industry in Part 1 of this disjointed cruise through mine history and that certainly is true. Without his prospecting zeal and skill, neither the first nor the second wave of industrial-scale mining in the county would have developed as it did.

However --- Haven tends to be overshadowed by his associates and therefore receives less attention. He was never excessively wealthy, so relied on the resources of others to finance projects he launched, his major contributions being skill, enthusiasm and labor. 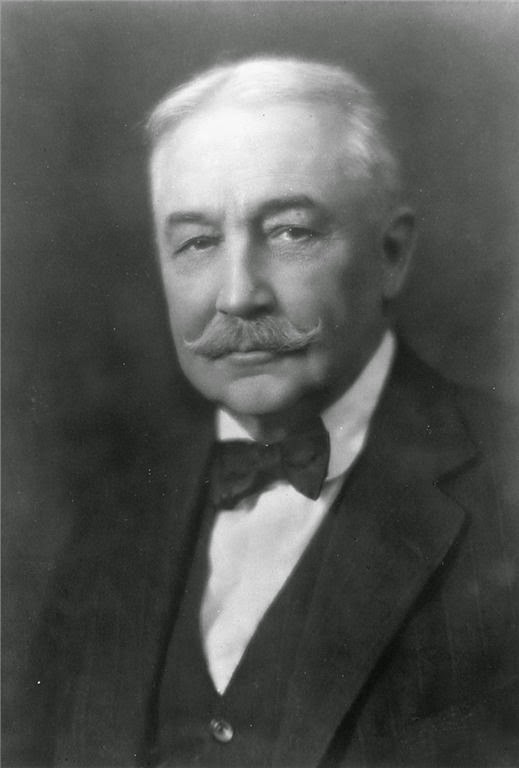 Among his associates, for example, was the notorious (or illustrious depending upon perspective) John Cleveland Osgood (right), a familiar face in Lucas County during the late 1870s and 1880s, who some years later while operating in Colorado ascended to dizzying robber baron heights, doing battle with the rich and famous, Rockefeller and Gould among them, for control of a mining empire.

Lucas County's ghost town of Cleveland, surveyed and platted by Haven, reportedly bears John C. Osgood's middle name, honoring him rather than referencing the Ohio city of that name.

Haven, too, sold out of his Lucas County coal interests when the companies exploiting them were on the rise, then moved on.

That certainly was the case with the White Breast Coal & Mining Co., which Haven exited during 1883 after signing a pledge not to engage in mining enterprises along the Chicago, Burlington & Quincy line for 10 years. Without Haven, the company's prospecting efforts failed and its mines in the White Breast field were abandoned during the early 1890s, bringing coal production in Lucas County to a virtual standstill. It took Haven's return after 10 years had passed to resuscitate it.

Haven maintained his ties to Lucas County, however, until his death during 1928 and was fondly remembered here in part because his home from the 1890s until the late 1920s was Ottumwa, where he is buried.

Haven also was a talented writer and story-teller, and set down a good deal about himself in various places --- if one knows where to look.

Haven was born, by his own account, on Nov. 11, 1845, in Portsmouth, New Hampshire. His parents were James Henderson Haven, a chemist by profession, and Elizabeth Salter Cushman --- both descendants of venerable New England families.

James and Elizabeth may have flirted briefly with Joseph Smith's Latter-day Saints during the early 1840s since their eldest son, Samuel Cushman Haven, was born at Nauvoo, Illinois, on Feb. 19, 1843, and few who were not Mormon lived there at that time.

Whatever the case, the Havens moved on to Quincy, Illinois, then to St. Louis, but apparently had returned to Portsmouth prior to William's birth, returning to St. Louis soon thereafter.

Elizabeth and her two sons reportedly were spending the winter in Portsmouth with her father, Samuel Cushman, when James died of cholera in St. Louis on January 26, 1849, when William was 3. Elizabeth and the boys continued to live in Portsmouth with her father until she married as her second husband the venerable, affluent (and much older) Samuel Tilton during 1858.

Samuel C., known always as Cushing, was very much the star of the small family --- attractive, sociable and precocious. He was dispatched during the fall of 1856, age 13, to Phillips Exeter Academy where he remained until 1859 when he entered Harvard College as a sophomore. He graduated from Harvard during 1862 after a stellar academic career.

William, on the other hand, was sent off to Norwich University, also known as the Military College of Vermont, at Northfield, Vermont, where he graduated with a bachelor of science degree during 1863 at the age of 18.

With the Civil War in progress, Cushman enlisted immediately after graduation from Harvard and was commissioned 2nd Lieutenant in Co. B, 162nd Regiment, New York State Volunteer Infantry.

William, only a few months short of graduation, attempted to leave Norwich and enlist, too, during the spring of 1863, but was dissuaded by his mother, who allowed that one son in service was enough. He returned to Norwich.

Not long after William's graduation, Cushman died of diptheria on June 23, 1863, in a Union hospital at Baton Rouge, Louisiana. He was 20. William gave no further immediate thought to enlisting.

In the fall of 1864, however, William did enlist as a sergeant in the reorganized 2nd Massachusetts Volunteer Infantry, but the war had for practical purposes ended before he could be mustered into U.S. service and during 1865 he was mustered out at Boston.

William told the story of his abortive attempt at a military career in a letter to the Norwich University Record, published in its March 8, 1919, edition, but apparently written a few weeks earlier. Also in that letter, he refers to his son, also named Samuel Cushman Haven and also known as Cushman --- in his late uncle's honor --- who at the time was serving as private first class in Co. B, 314th Field Signal Battalion, 98th Division, American Expeditionary Force, in Europe.

Cushman had practiced law in Chariton before returning to Ottumwa to help care for his dying mother, then enlisted after her death during July of 1917.

Cushman died of disease on Feb. 9, 1919, at St. Mihiel, Meuse-Argonne, Trier, Germany, age 29, a month before the letter that mentioned him proudly was published in Vermont. His remains were returned to Ottumwa for burial during 1920.

William Haven's life was not without its sorrows.

Haven's first biography was very short, 12 lines in Dan Baker's definitive 1881 history of Lucas County. In it, William provides a little more information about the years immediately after his graduation from Norwich University in 1863. "He was first engaged with a dry goods and commission house of Boston, pursuing the business with various firms until 1869," the entry reads. "He then went to New York and engaged in the same business."

More than 30 years later, just after he had sold his interest in the Inland Coal Co. during 1913, Haven was prevailed upon by the editor of The Chariton Herald-Patriot to write (in third-person) an account of his mining career in Lucas County, published on the front page of that newspaper on July 31, 1913. In it, William writes briefly of his move west from New York and his early prospecting days in Lucas County.

"(He) came to Illinois in 1869 and had charge of construction of ten miles of the Buda branch of the C.B.&Q. Railroad. His connection with the coal mining industry of Iowa commenced in 1870 when he was placed in charge of three mines of the Union Coal and Mining Company as assistant superintendent (William was only 25, keep in mind).

"The mines furthest west on the C.B. & Q. in the early part of the '70's was located about two miles west of Albia, and as no prospecting had been done west beyond this point, and as there were no outcrops in that direction showing seams of coal thick enough to be mined economically and on a large scale, the existence of workable coal seams was a matter of great uncertainty.

"Mr. Haven was well aware of this fact, but he also knew that the nearer a mine could be located to the viable markets the greater its advantages over mines further removed, mining conditions being the same, and so he decided to prospect the untried territory.

"In 1874, he made a lease with Col. B.O. Carr for his farm of 540 acres, situated on White Breast creek, near Lucas. But prospecting for coal is expensive and Mr. Haven had not sufficient means himself to undertake the work alone. After nearly a year's effort he succeeded in interesting others in the enterprise and in obtaining the necessary funds for prospecting.

"For a long time the results were disappointing, the money raised was spent, Mr. Haven's associates were discouraged and considered the undertaking a failure. Mr. Haven persevered in his efforts and in January, 1876, he found the coal exceeding five feet in thickness. The White Breast Coal and Mining Company was at once organized with William Haven as president.

"On account of good marketing facilities and the good quality of the coal the entire output of the mines opened was readily disposed of and for several years this company was the largest shipper of coal in the state."

In late 1920, William wrote another letter to The Norwich Record, this one describing in detail his discovery of coal at the base of the White Breast Hill east of Lucas during January 1876 and the subsequent formation of the White Breast Coal and Mining Co. It reads a little like an adventure story which, in effect it was; and I'll pick up the narrative with it next time.

Enjoying the mining stories. Thank you for them. My Father worked in the mines in Lucas and Marion counties from age 8 years to 54. I am told he started as a waterboy and later set charges for blasting.