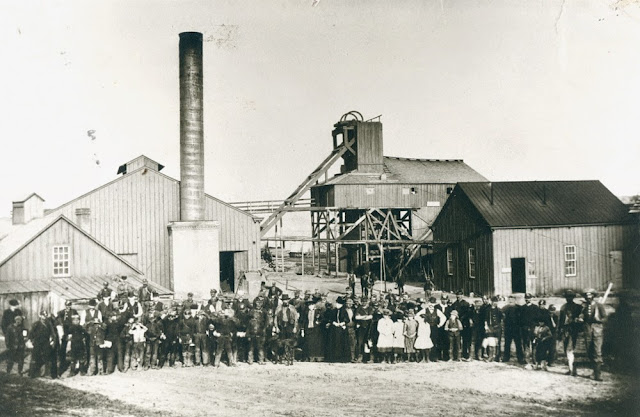 This photo from the Lucas County Historical Society collection reportedly was taken during 1880. It shows Lucas County's first great coal mine --- Whitebreast Fuel Co. No. 1, also known as Cleveland No. 1 --- about two miles east of Lucas. A total of 405 miners and 52 mules were employed at this mine during 1880. The mine generated its own electricity and lighted the mine with it --- the first in Iowa to do so.

I grew up hearing stories of the latter phase of Lucas County's coal mining industry because my mother grew up during the late teens and early 1920s on an English Township farm alongside a road that then, perhaps, was the busiest in the county. It connected the boom town of Williamson with the coal camps of Tipperary and Olmitz to the east and the Central Iowa Fuel Company No. 4 and Consolidated Indiana No. 3 mines, almost due north. Williamson miners employed at Central Iowa Fuel Co. Mine No. 5 walked right by Sunnyside School, east of Williamson, which my mother and her siblings attended.

By the time my mother graduated from Chariton High School during the early 1930s, mining still was going strong, but beginning of the end was in sight.

Now, coal mining in Iowa is extinct and rarely thought of --- except in Lucas, where the John L. Lewis Museum of Mining and Labor helps to keep that era alive.

So I thought it might be interesting to review that industry's history briefly off and on this fall and winter --- just so no one can say, "they didn't tell us about that."

I'll bet you didn't know, for example, that one man --- William Haven --- can be identified as the father of Lucas County's coal mining industry. Or that there were two separate major coal mining phases in the county, one from the 1870s into the early 1890s principally near Lucas in the west central part of the county; the other, from 1900 until the industry foundered, principally in northeast Lucas County's English and Pleasant townships. And how many know what a "drift mine" is?

The most valuable deposits of Lucas County coal are very deep, accessed by shaft mines that descended between 200 and 300 feet to reach the coal beds. But drift mines --- small mines that tunnel horizontally into beds of coal that come very near the surface, sometimes as outcrops --- were earlier and more frequent.

Here is Lugn's brief summary of the first phase of mining in Lucas County:

"The first discovery of coal in Lucas county is accredited to a ground hog burrowing in the banks of North Cedar creek in the vicinity of or east of the Briggs drift mine. To whom or the exact date when this fact became known the writer has been unable to learn, but was considerably prior to (Orestes H.) St. John's visit to the county in 1867 (St. John was a geologist and the first to formally analyze the lay of Lucas County's land). In 1860 the county produced 945 tons of coal. In the summer of 1867 when St. John made a survey of this area he recorded drift mining along North Cedar creek and its branches in the northeast part of Pleasant township, along English, Little White Breast and White Breast creeks. One of this type exposures ... was at Wheeler's mill (near Wheeler's bridge); an upper "Wheeler" coal and a lower "Panora" coal were being mind there at that time. All these mines were small and of very local importance. No attempt has been made to record the history of all of the drift mines of the county or to locate them .... The duration of any one of these has been so short and their production and aggregate importance have been so small that such a record would be of little value.

"In 1868 the production was 37,283 bushels or 1491 tons, but the beginning of coal mining history in Lucas county dates from 1874, when in June Mr. William Haven and others leased 540 acres of land on White Breast creek about two miles east of the town of Lucas. The leased lands belonged wholly or in part to Col. Byron O. Carr of Galesburg, Illinois. About a year later the White Breast Fuel Company was organized and Mr. Haven became associated with Wesley Jones, J.C. Osgood, Louis R. Fix of Burlington and J.T. Potter. Mr. Osgood was made president of the company.

"In the first prospecting of the White Breast field a number of holes were drilled. After many delays and much trouble, due mostly to financial difficulties, on January 16, 1878 (actually January 16, 1876), five feet, four inches of coal was reached. This marks the beginning of development in the White Breast field, one of the most productive in its day. James H. Lees, in his History of Coal Mining in Iowa, states "... a field from which a greater tonnage has been raised in shorter time than from any other field in the state." This interesting beginning is best told by a further quotation from Lees' paper: "The shaft was 250 feet deep and an eighty horse power engine was installed for hoisting the coal. Tail-rope haulage was installed in 1882. Electricity was used for lighting the mine, the first installation in the state. When the Mine Inspector made his first report in 1880, 405 men and 52 mules were employed and were raising 640 tons per day. The quality of the coal was considered superior to that of any other then produced in the state and the coal acquired a great reputation and an extensive market. White Breast No. 1 (also known as Cleveland No. 1) was the first mine to adopt the plan of shot firing once a day. This avoided the danger of explosions when the men were in the mine and also kept the air pure for the men and mules." The company operated several mines in this field and in 1880 the production was 126,490 tons, making the county an important Iowa producer.

"About 125 diamond drill holes were put down north and east of the White Breast Company mines in the years 1884 and 1885 but did not find any additional workable coal. Conditions in parts of the field being worked were so unfavorable that by 1891 the field was considered worked out and the large mines of the White Breast Company were abandoned. Production had risen to 594,450 tons in 1886; it dropped to 339,229 tons in 1890 and then in 1891 fell off to practically nothing. Lucas County did not again become a producer until Mr. Haven resumed operations in 1899.

"There were some other more or less abortive attempts to work the Lower coal but none was notably successful. In 1877 or 1878 Daniel Eikenberry of Chariton sank a shaft a mile and a half east of White Breast No. 1. This penetrated sixty or seventy feet deeper than the White Breast mine but did not find conditions favorable and hence was not develeped. In 1879 a cooperative company of miners and business men of Chariton was organized. The more prominent of these men were S.H. Mallory, D.Q. Storie and D.M. Thompson and the company was known as the Chariton Co-operative Coal Company. This company sank a shaft to a depth of 330 feet, the greatest depth of any mine in Iowa at that time. It was located about three-fourths mile north of the Eikenberry shaft. The cooperative scheme did not work well and soon a reorganation was effected, the business men taking over complete control. They, not being experts in mining, did not succeed, for as a consequence of unwise mining methods disastrous slumping and caving resulted and the venture had to be abandoned. They also had a good deal of trouble with water. The equipment was up to date and adequate.

"In 1877 the Union Coal and Mining Company of Ottumwa under the direction of its president, J.C. Peasley of Burlington, sought to enter the White Breast field. The company acquired the shallow Ladow shaft (in southwest Lucas, later known as the Big Hill Mine), which it deepened to the Lower coal, here five feet in thickness and at a depth of 300 feet. After considerable expenditure of money and the opening of several entries, the company abandoned the mine on account of the troublesome and excessive quantity of water, which it was inadequately equipped to handle. In 1899 this mine passed into the possession of Hon. H.L. Byers, associated with George Ramsey of Oskaloosa and Messrs. Shuler and Bates of Illinois. They reconditioned the old shaft and using it as an air shaft sank a new main shaft to the west of it. The water was pumped out and the mine operated for about a year when it passed into the hands of  S.W. White of What Cheer and of White City, and others. About a year later it was transferred to Mr. Reed of Illinois and he, with Mr. Byers, operated it for two months and then Mr. Moody of Kansas became part owner. Work was again discontinued late in 1907.

"About 1878 the Farmers Co-operative Coal Company was organized and opened a mine at Zero on the Chicago, Burlington and Quincy Railroad a mile and a half west of the Monroe county line. The shaft was 260 feet deep and reached the Lower coal, which is five feet thick at this place. This mine passed through several changes in ownership and was last operated under lease by the White Breast Fuel Company. After being worked more or less continuously for less than ten years it was finally abandoned owing to the large amount of poor coal and the "bowlders" in the coal and also on account of water entering through the sandstone roof. Where Lucas county mines, such as this and some in the White Breast field, had a sandstone roof, water has usually been one of the main causes of abandonment, but on the other hand a shale or "slate" roof usually means a dry mine.

"Mr. Haven, previously referred to, had sold his interests in the White Breast mines to Mr. Osgood in 1883 and also bound himself not to engage in mining along the Burlington line for ten years ...."

More of this another day ...