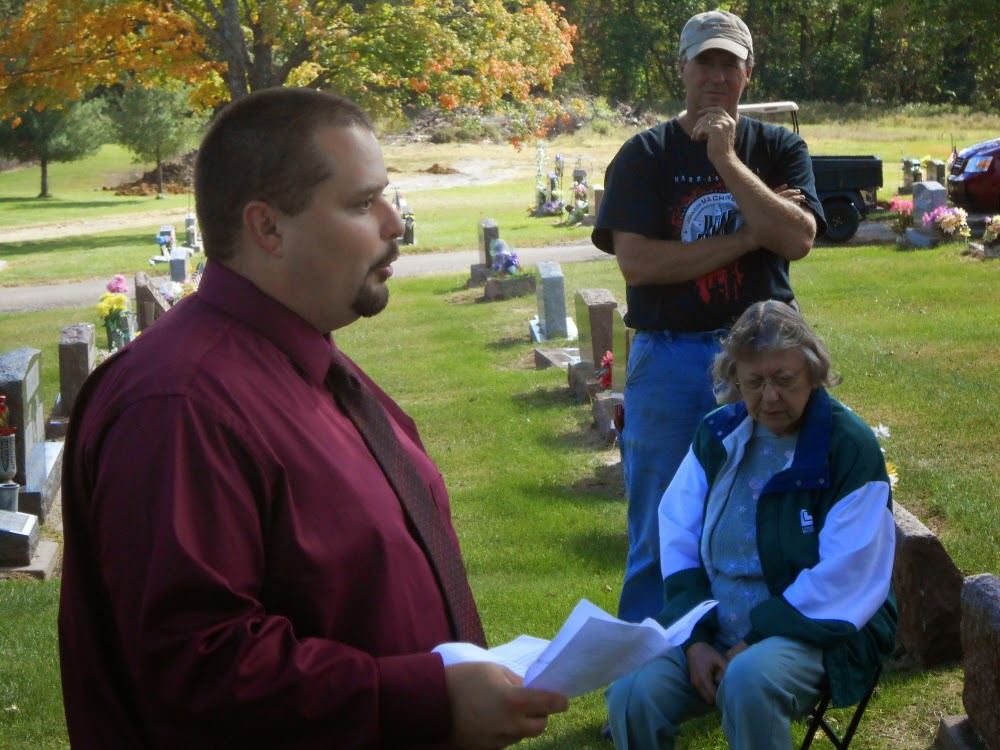 The Orliff A. Clark family lot was the final and final stop on last Sunday's 11th annual Chariton Cemetery Heritage Tour. O.A. Clark owned the Hotel Charitone for 40 years, from 1931 until 1971, and his son, Jack, leased and managed it for many of those years. Brad Krutsinger portrayed Clark and introduced several members of the Clark family during his presentation. Here's the script upon which his portrayal was based:

ORLIFF A. CLARK AND FAMILY

Friends, it’s good to have guests again. I spent my life in the hospitality business --- including 40 years as owner of the Hotel Charitone --- and I’ve missed it; it’s too quiet out here sometimes.

The name on the tombstone is Orliff A. Clark, but few called me that. I was known in business as O.A. Clark and to my friends as “Ora,” so you may call me that. Nearly the whole family is here --- even though only son Jack lived in Chariton and none of us died here. We came home to Lucas County from Ottumwa, Iowa City, Cedar Rapids, New York City and Texas because we loved the place and each other. I’ll tell you a little about myself now, then introduce the rest of the family later.

I was born during 1893 in Missouri and grew up in Clarinda, where my family operated a hotel, so hospitality ran in the family. I married Sylvesta Holiday, buried here beside me, during 1913 in Maryville, Missouri, and we had four children, Jack, Catherine, Ford and George.

When William Junkin and Henry McCollough put the Charitone on the market in 1930 (they built it in 1923), Sylvesta and I already owned the Clark Hotel in Albia and the Leggett in Fairfield, where we lived, and a share of my brother Ben’s Leeper Hotel in Chillicothe, Missouri.

We bought the furniture and fixtures of the Charitone for $25,000, took a lease on the building that began March 1, 1931, and paid Junkin & McCollough $750 a month for 10 years after that. When that lease expired, we bought the building outright in 1941.

One of my first moves after leasing the Charitone was to order a big neon-lighted Hotel Charitone sign for the building’s southwest corner --- so you can imagine how pleased I was last December when the restored near-identical sign that replaced it in the 1950s was relighted.

We acquired the Hotel Ballingall in Ottumwa during 1934 and moved the family there from Fairfield and it became the flagship of the Clark Hotels chain. But I was often in Chariton --- supervising, playing golf and visiting. So when Sylvesta died on Jan. 1, 1950, we decided to bury her here. Our son Jack was operating the Charitone at the time, so was nearby.

JACK WAS our eldest, born in 1916 in Clarinda and raised in Albia and Fairfield. He was at loose ends in 1937 after graduating from the University of Iowa, so I named him manager of the Charitone. He was handsome and athletic, a gifted musician and a fine artist --- and made many friends in Chariton, but was not ready to settle down. So during the fall of 1939, he enrolled at Cornell University in Ithica, New York, to study hotel management; then remained on the East Coast to study art in New York City and elsewhere until World War II broke out.

In 1942, Jack enlisted in the U.S. Navy and was trained as a communications specialist before being deployed to the Pacific where he served aboard ships, in Hawaii and on Tarawa and Eniwetok atolls before his honorable discharge during March of 1946 as lieutenant, senior grade.

I convinced Jack to return to Iowa, the family business and to the Charitone --- but I’m not sure he really wanted to. Nonetheless, he purchased the furniture and fixtures in July of 1946, leased the building and operated the hotel for nearly 20 years. And business boomed. Up to 10,000 guests at year signed the Charitone registers in those first years after the war.

Jack became a community leader, first elected president of the Chamber of Commerce during December of 1946. For years, he chaired Lucas County savings bond campaigns. He was a charter member of the Aeolian Singers, organized in 1953, and became an accomplished painter, specializing in portraiture. He also taught art and art appreciation across southern Iowa.

Jack was gay, made no particular secret of it and that didn’t seem to make much difference to the people of Chariton. But I think now that he might have been happier in a bigger city. Complications in his personal life plus the pressing need to make big changes in how the hotel operated resulted in his 1965 decision to move on. I purchased the furniture and fixtures 19 years after Jack had bought them and operated the Charitone myself until 1971 with Maxine Poush as manager until I sold out to Don Kingsbury and Mahlon Laing in 1971.

Jack moved to the Chicago area, then to Fairfield --- where he taught art in the public schools --- and finally to Iowa City where he was enrolled in graduate courses when he died at age 61 during 1977 and came home to Chariton.

CATHERINE, born in 1919 and always known as Kay, was our second child. She graduated from Ottumwa High School and enrolled at Barnard College in New York City during 1940, just after Jack had moved to the East Coast. While she never lived in Chariton, she was a frequent visitor here, staying before and after her marriage with Jack at the Charitone.

In New York City, she met William L. Murphy, whose father William K. Murphy had invented the famous Murphy folding bed about 1900 in California, then moved operations to New York in 1925. They were married in Ottumwa, but settled in New York and then on Long Island where he led the Murphy Bed Co., still in business on Long Island, until his death during 1983. His remains were brought to Chariton for burial, Kay took more responsibility in the business, then retired and moved to Texas. She died there during 2005 and came home to Chariton, too.

AND HERE IS FORD, born in 1931 and our third child, also a graduate of Ottumwa High School and the University of Iowa. When he died in 1980 at age 48, leaving a wife and children behind, he was a reporter and columnist for The Cedar Rapids Gazette and his accounts of his struggle with cancer were widely acclaimed. He also had worked as a reporter and editor for Iowa Public Radio. A gifted writer, Ford also wrote two novels that were popular in their time.

AND THAT’S THE FAMILY. Think of us the next time you have a meal or a drink at the Charitone Market Grille. We shared many happy occasions in that old building.
Posted by Frank D. Myers at 6:19 AM