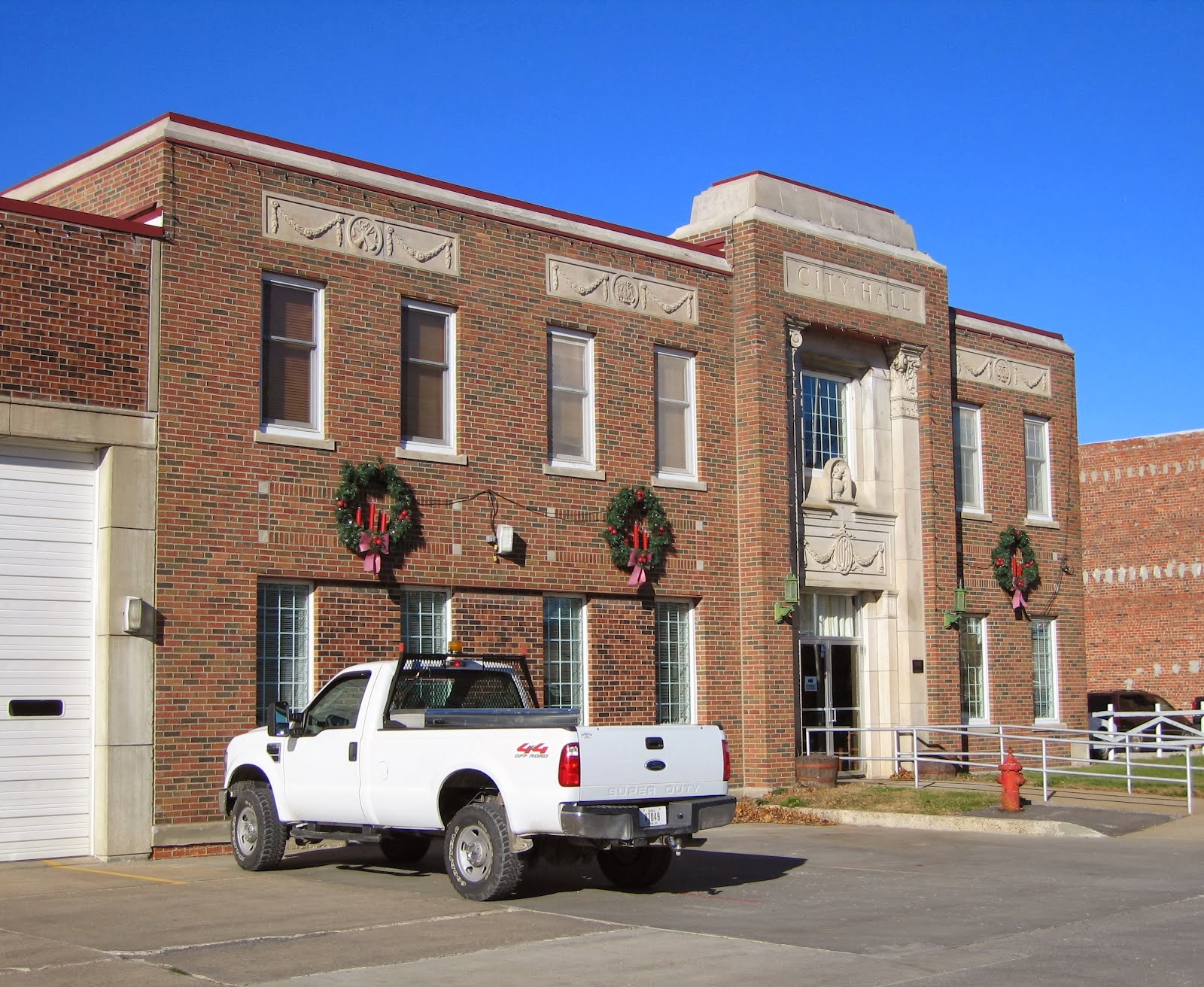 Chariton City Hall, built during 1931, is my favorite among architect William L. Perkins' Chariton buildings and like several others, is listed on the National Register of Historic Places. The Masonic Temple, even under its recently added machine shed roof, may be more significant --- arguably among Iowa's finest smaller buildings of that era --- but City Hall is lighter, more graceful and more delicately detailed.

Since Perkins was not only a practicing architect but also Chariton's city engineer at the time of construction, there was little doubt about who would design the new building. 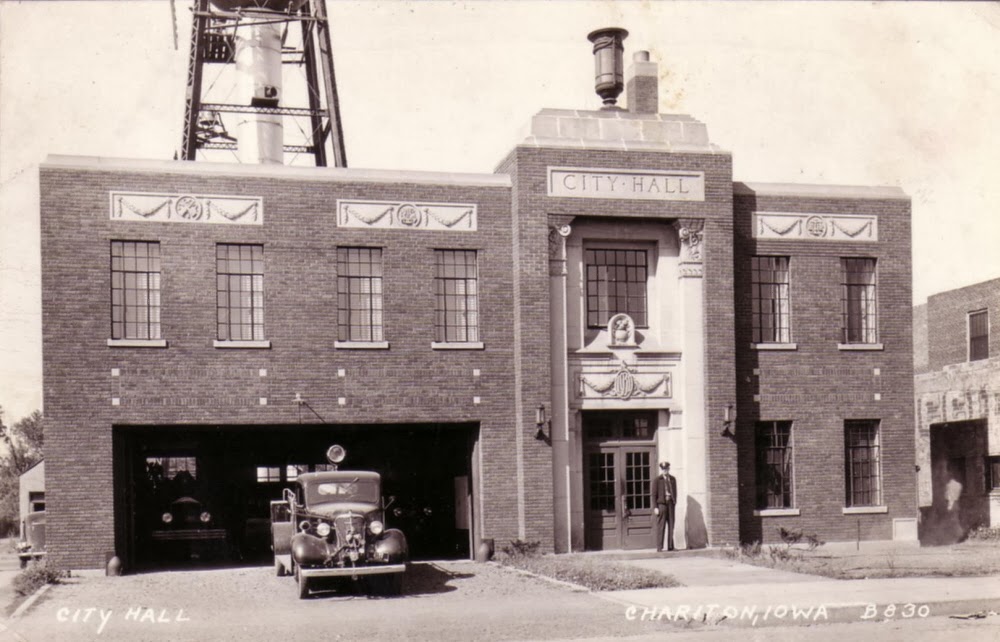 The most notable change in the original structure occurred when the new fire station wing was added 40 years later to the south. At the time, the giant doors of the former fire station were closed in an harmonious manner and new offices for the city clerk, as well as new council chambers, constructed in that area.

Movement toward erection of a new city hall began to gain momentum in Chariton during the spring of 1929. At that time, city offices were located in rented rooms on the first level of the Charitone Annex on East Braden Avenue.

A deteriorating 1881 two-story brick building, located on the lot under the south half of the current 1931 building, had been abandoned as city hall some years previously. Fire-fighting equipment was stored on the first floor and the second was used as a club room and training area for volunteer firefighters.

On June 3, 1929, firefighters and community leaders met with the City Council and secured its permission to commission estimates for a new city hall/fire station to be located on the site of the existing building and the vacant lot to the north. According to those estimates, between $30,000 and $40,000 would be required to build it.

On Sept. 3, firefighters presented to the council a petition signed by more than 600 residents calling upon the council to call an election in order to authorize the issuance of up to $40,000 in bonds to finance the new building. The petition was filed for the record, but was not acted upon for more than a year. But during January of 1931, City Council finally authorized the vote, to coincide with regular city elections on March 30.

The campaign for the city hall issue was launched officially on Feb. 11, 1931, during a "smoker" at the old city hall/fire station attended by some 150 business and professional men as well as other interested citizens. Those speaking in favor of the issue pointed out economies in the cost of building materials and lower interest rates resulting from the depressed economy and also noted that the project would boost employment in Chariton. An exhaustive campaign to ensure passage of the issue followed.

Voters on March 30 overwhelmingly approved separate issues, one authorizing the city to build a new city hall and the other authorizing issuance of up to $35,000 in bonds to finance the project. The final tally was 1,121 votes in favor and 574 against.

During late April, the old fire station-city hall, built 50 years earlier for $3,600, was sold for $25 to Best & Sons with the provision that it be torn down as soon as possible to clear the site. The $35,000 in bonds were sold on May 4 to National Bank & Trust Co. of Chariton at 4 percent interest with a $27.50 premium, considered highly advantageous to the city.

During late May, it was announced that Perkins had completed plans for the new building and the official bid-letting was scheduled for June 16.

A little later in June, the old city hall/fire station was knocked down, firefighting equipment moved to temporary quarters elsewhere near the square and site preparation work for the new building began.

The cornerstone for the new building was put into place during a grand ceremony on Thursday, July 30. Hundreds of Masons from 10 southern Iowa lodges, city officials and hundreds of residents gathered at the site as grand officers of the State Masonic Lodge put the cornerstone in place with Charles T. Percival, of Bonaparte, grand master of the lodge of Iowa, in charge. Boy Scouts and the Chariton town band were among participants in a parade across the square and down South Main to a temporary arcade erected to shield dignitaries from the hot summer sun.

By November, construction was nearing completion and City Clerk Theo Rosa was preparing for it by refinishing all of the wooden furniture used in the clerk's offce in the Charitone Annex --- apparently no thought had been given to buying new office equipment to match the new building.

Chariton's City Council officially accepted the new building during a special meeting held in the new council chambers on Monday, Dec. 21. City workers had moved into the new building the preceding Friday, as had Chariton firefighters and their equipment.

The new building was dedicated officially on Friday, Feb. 26, 1932. A public reception and open house was held from 1 to 5 p.m., followed by a 6:30 p.m .banquet at the Methodist Church. The dedicatory program commenced at 8 p.m. in the new City Hall auditorium featuring as guest speaker Albia attorney Charles E. Miller --- a cousin of mine, actually --- a noted southern Iowa orator of the day.

Here is a description of the building, published in The Chariton Leader on 23 February 1932, as those who toured that day would have seen it:

From the outside the building presents a charming appearance, being finished in variegated colored brick. On the left from the front is the large folding doors of the fire station, behind which is stored Chariton's fire fighting equipment. These doors are mounted on tracks and instantaneous opening is always assured.

The city hall offices occupy the right half of the lower floor. A huge double door, framed in columns of stone, presents a picturesque view. Dorinthian (sic) architecture is the predominate note of the simple decorations. In the center of the decorations over the door is the date of the building etched in stone, "1931."

A pier lantern of statuary bronze surmounts the building. Panes of circular glass enclose 6 100-watt bulbs and when the lantern is lighted a yellow glow is shed over the building.

Entering the door the impressive offices of the city are located on the right, diagonally from the door. The first door to the right is that which leads into the office of A.C. Riebel, Mayor.

A huge grilled window has been installed in the window of the clerk's office and all city business is transacted through this grill. Furniture in the city clerk's office is of light oak and includes a flat top desk for the deputy clerk, Mrs. Effie Peterson, and a roll top desk for Theo Rosa, city clerk.

The mayor's office opens off the east end of the city clerk's office while on the west doors open into the council room.

The council room is one of the most outstanding rooms in the building with an admirable color scheme providing much beauty. The mural decoration is in a pastel shade of green while the ceiling is finished in cream. A ten foot table and ten chairs of solid walnut, with the chairs upholstered in sober blue leather, add a delightful contrast to the mural colors.

Opening off to the south is a 12 by 14 foot vault where official city records are kept. This vault is completely equipped with steel shelving and cabinets by the Lyon Locker company through their agent, C.C. McCormick of Des Moines.

A door in the west wall of the council room leads into the furnace and work shop room of the building. The city water department has its workshop in this room.

An oil burner, Century make and type 2, furnishes the heat for the building, while a Kewanee boiler, type C, is included in the installation. The oil burner was installed by Dean Ferguson of Chariton, while C.B. Ensley sold the boiler. Ensley also held the plumbing contract on the building.

Reverting back to the lobby of the building, just within the front door, a sweeping flight of steps built of terrazzo may be seen on the left. The steps lead to the second floor of the building.

At the top of the stairs the auditorium of the building is the first room to be seen. The auditorium seats from 300 to 400 people and has already found a useful place in furnishing a meeting room for the various organizations of the city and county.

Leaving the auditorium along the corridor that parallels the steps, and walking west the city treasurer's and the cemetery board offices may be found. In this room, George Carpenter, A.C. Riebel, J.H. Curtis, I.L Guernsey and E.H. Best, the members of the cemetery board, hold their meetings. Miss Maggie Beem, city treasurer, has her office in this room and O.E. Lamb, cemetery superintendent, also has offices there.

Down the corridor to the east in the adjoining room is the Community club and the Woman's club meeting room. This room has just been furnished by the two organizations and has tables and chairs of walnut upholstered in leather.

Across the corridor is the firemen's club room. Two pool tables and shower baths are features of this room. The floor is composed of cork carpet.

All of the floors in the building with the exception of the auditorium, the firemen's club room, the fire equipment storage room and the furnace room, are made of terrazzo. This contract was held by the J. T. Ure company of Cedar Rapids.

The woodwork of the building is entirely of walnut although little wood has been used in the construction. The floor of the auditorium is of oak on steel joists.

State officers whose work has caused them to visit the city hall have expressed the belief that the city hall is one of the finest in Iowa, regardless of the size of the city. All Chariton may take a reflected pride in the structure.
Posted by Frank D. Myers at 6:38 AM