More about John and Hannah Ballard 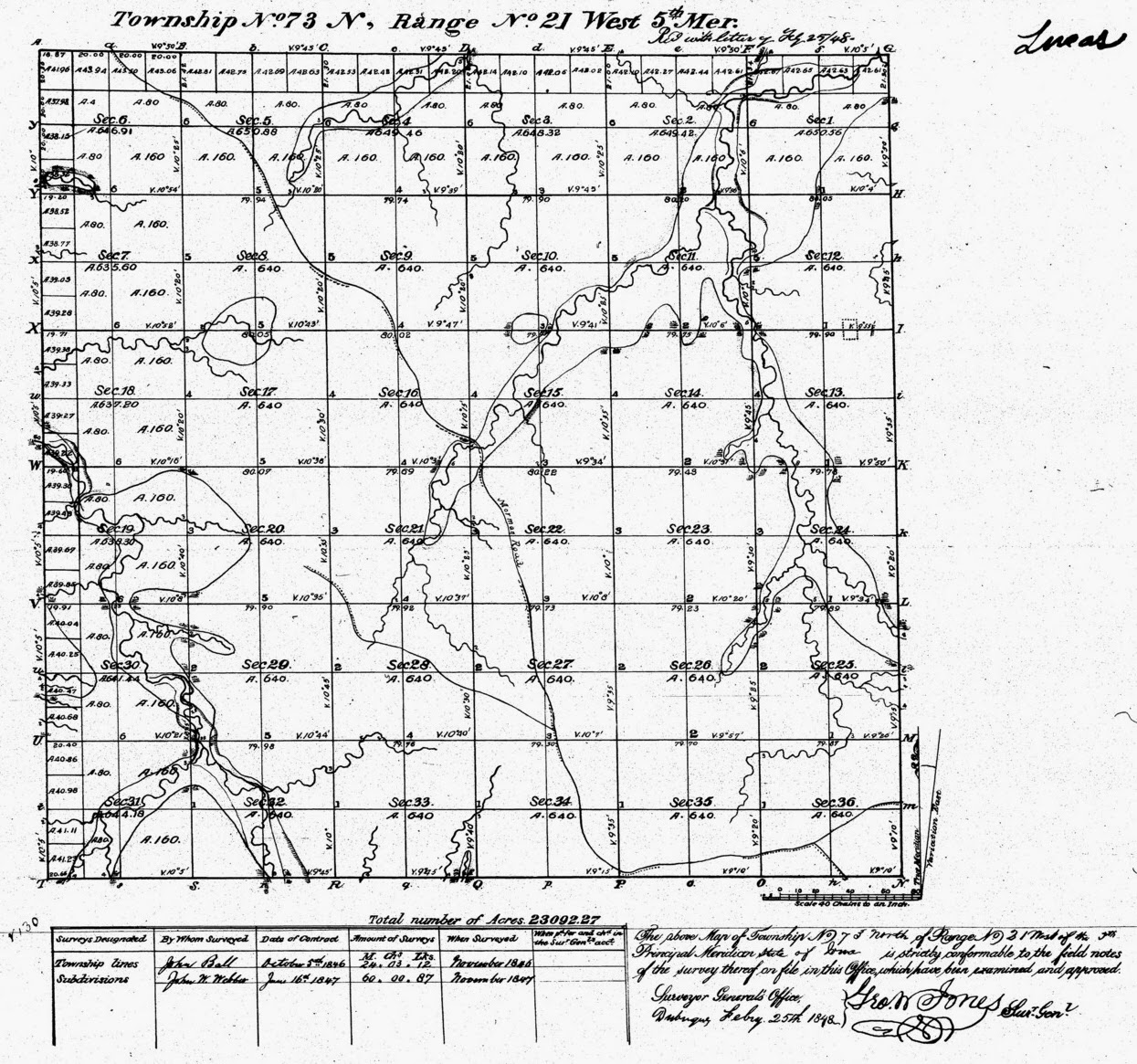 Lucas County opened to EuroAmerican settlers during October of 1845, but confusion about the first to settle permanently here --- the John and Hannah Ballard family --- arose after Dan Baker awarded the honor to William McDermott in his 1881 history. While McDermott was the first settler in Cedar Township, arriving in 1847, he trailed the Ballards by nearly a year.

Chariton attorney Warren S. Dungan and others, including Thomas M. Dunshee, an English Township farmer, sorted the whole thing out not long after the turn of the 20th century. Dungan was the organizer of Lucas County's first historical society and Dunshee compiled biographical information about his township's first settlers in an effort to get the information down on paper before all the pioneers were gone.

Both Dungan and Dunshee corresponded with Allen Jacobs, husband of the Ballards' daughter, Minerva, who lived near Athol in Smith County, Kansas, in search of information. I've already transcribed Jacobs' informative reply to Dunshee --- you'll find it here.

But there are two more letters on the topic, also in the Lucas County Historical Society collection, that are interesting, too. The first, dated Nov. 30, 1904, was written by Jacobs to Dungan. The second is more of an affidavit than a letter and was obtained from Minerva (Ballard) Jacobs by Dungan during 1905, when the Jacobs were visiting relatives at Derby.

The English Township map here, certified at Dubuque on Feb. 25, 1848, by George W. Jones, surveyor general of Iowa, was drawn from field notes compiled during 1846 and 1847 by the two men who actually conducted the first survey of the county --- John Ball and John W. Webber. Minerva (Ballard) Jacobs remembered their visit to the family cabin, and that they had traded coffee to her parents for honey.

If you right-click and open the map in a new window, you'll see a small hatched square in the upper right hand corner, on the line between Sections 12 and 13. That was the location of the Ballard cabin in 1846.

Here's the first of the two letters:

Dear Old Colonel. I hasten to answer your letter which is at hand, but before I commence must excuse myself for writing with pencil. My hand is very shaky.

My wife, Minerva, was born near Quincy, Ill., Nov. 25, 1837. George was born in Schuyler County, Missouri, Nov. 27, 1840;. Sarah was born at Dodgers (Dodge's) Point, Appanoos County, Iowa, July 19, 1846. Mary and William died before my wife was born. James left home when 17 years old and we suppose is dead.  Eliza married James A. Mercer in 1849; was married in Marion Co. She has been dead many years. James A. Mercer is living near Derby, Iowa, at William Sowder's, his son-in-law. Ithena married William Black, lives in Colorado, can't say where. We suppose that George is dead. Sarah is dead.

The reason why my wife recollects when her father moved to Lucas County, she was nearly nine years old when her sister was born. Her father and her brother, John, went to Lucas Co. in the spring of 1846 and built them a little shanty and broke about 5 acres of ground and planted it in sod corn and was back home when her sister Sarah was born; and when Sarah was seven weeks old they started to move to Lucas. Co.

In my letter to (Thomas M.) Dunshee, I think I said that John Mercer and his brother, James A., came there in 1847, but my wife says they came and built a cabin in 1847, but did not move there until the spring of 1848 and Wm. McDermott settled in Cedar about the same time the Mercers came there.

John Mercer's wife gave birth to the first child that was born in English Twp., and I believe the first in the county. (I had almost forgot, my wife's brother John died about 2 years ago).

My wife recollects very well of those surveyors you speak of. They was at her father's home and traded him some coffee for some honey and that was in 1847. Those Mormons that stopped at or near Chariton Point built a cabin I think in 1846 and wintered there that winter although it may have been in 1847; at least they were not permanent settlers; they went on to Salt Lake.

I have not got a copy of the Chariton Leader. If Mr. Dunshee set me one it failed to reach me. I have tried to be impartial and have given the facts the best my recollection serves me.

And here's the affidavit collected in person by Warren S. Dungan a year later, when Allen and Minerva Jacobs were visiting relatives at Derby:

I am a daughter of John Ballard, who was born in East Tennessee about the year (blank).

In the spring of 1846, Father and Brother John went to Lucas County and built a cabin on NE1/4 of NW1/4 of Section Twelve, Township Seventy-Three, Range Twenty-One, now called English Township. And in August he moved his family to this new home in Lucas County.

I was born in Illinois 25th Nov. 1837 and nearly was nine years old when we moved to Lucas County. I was not nine years old until Nov. 25, 1846. My youngest sister, Sarah, was born 19 day of July 1846, only a short time after Father and Brother John returned from Lucas Co. where they had built the cabin.

I was married to Allen Jacobs in English Township, Lucas County, Dec. 2, 1855, by John Newman, a justice of the peace who afterwards was elected to the office of county judge of Lucas Co. I resided with my parents from the time of my birth until that of my marriage to Mr. Jacobs.

My father, when he returned from Lucas Co. in the spring of 1846, told us that he had built a house and had plowed or broken up a few acres and had planted it in corn. When we moved there in August 1846, we found it as he had stated.

My father married Miss Hannah Clark in East Tennessee. Their children were:

My husband and I resided in Lucas Co., Iowa, after were were married until 1871, when we moved to Republic Co., Kansas, from there back to Iowa for 7 years, and then back to Kansas, Smith (County), and here we still reside, Post Office Athol. When we returned from Kansas to Iowa we settled and lived in Appanoose County until we returned to Kansas.

The first school I attended after we were in Lucas Co. was taught in Marion Co., just across the line. Mary Crawley was the teacher, sister to Mr. David Crawley, who now resides in Lucas County. I never attended school in Lucas Co. I have no recollection of any school being held in Lucas Co. until after I was married.

I remember Hiram Moon preaching at my father's, in the cabin built on Section 12. This was 3 or 4 years after we settled there. About 1851, Father moved north on Section One, same township, and staid a few years and then moved to Decatur Co., Iowa, and from there to southern Kansas, where he died about 1859.

I make this statement in the interest of the true history of Lucas County. My father often told us that he was the first settler in the county.

There's some confusion among Ballard descendants about exactly when John died, but the widowed Hannah and their youngest daughter, Sarah, were living with James A. and Eliza (Ballard) Mercer in Decatur County when the 1860 census was taken, so ca. 1859 is the most likely date. In 1870, she was living in Chariton with her daughter and son-in-law, Minerva and Allen Jacobs. The mortality schedule attached to the 1880 census of Lucas County shows that Hannah died in Chariton during May of 1880 as the result of a fall, but the location of her grave is unknown. Brownlee Cemetery, traditional burial place of the Ballards, is most likely.

Of the Ballard children, George lived in English Township with his large family until death during 1895. He is buried in Brownlee Cemetery. Ballards remaining here for the most part are his descendants.