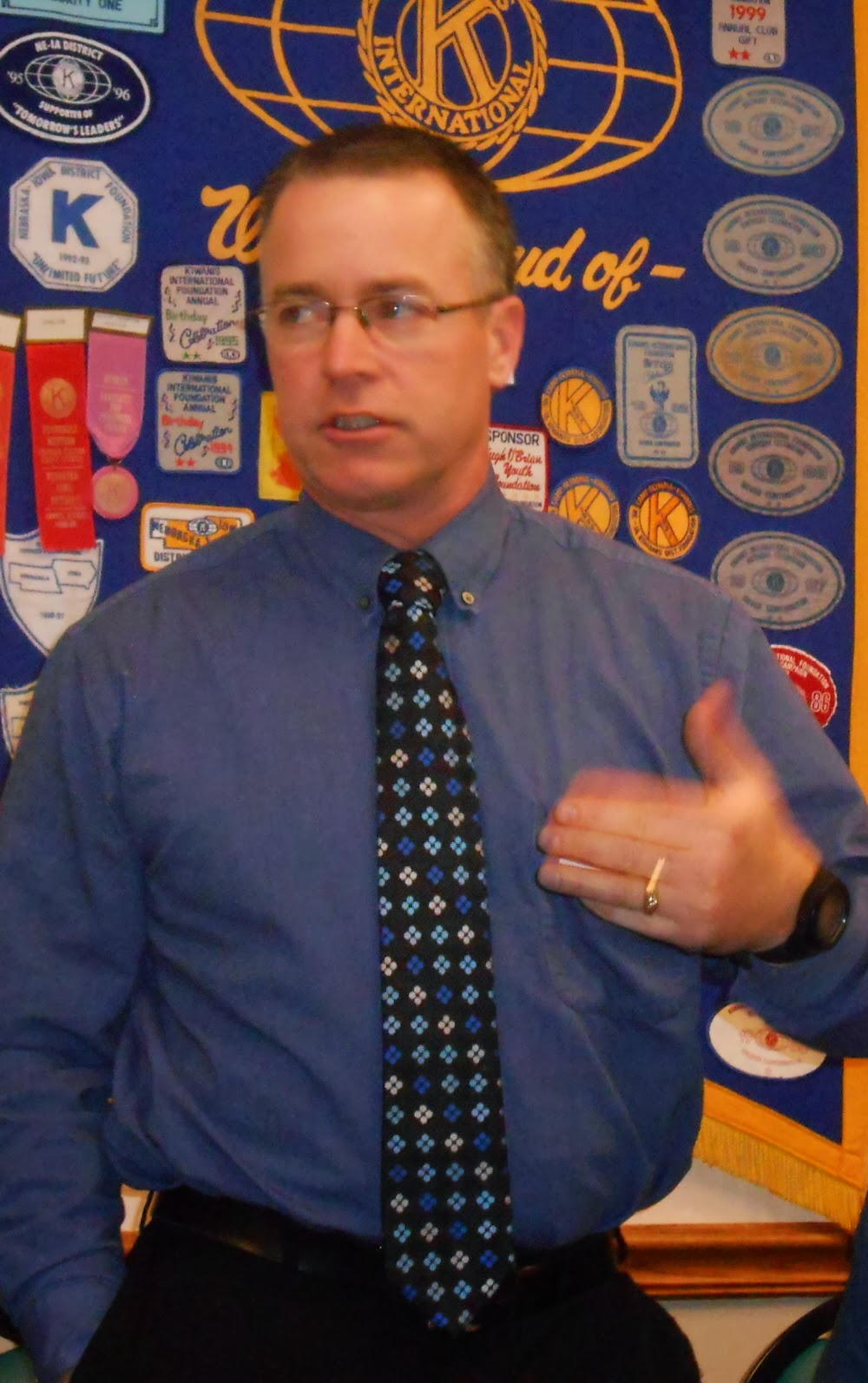 We're getting accustomed now to seeing the Charitone lighted up at night from top to bottom again --- and the big hotel sign shining brightly on the corner. So the anticipation (and speculation) has shifted to the Charitone Market Grille --- a full-service restaurant with related bar --- that will fill the first floor come spring.

Quite a few of our questions were answered early Friday morning when Tim Michael (left), store director at Chariton Hy-Vee, updated Kiwanians on the new hospitality venue, which most likely will open during April. Tim is serving as resident point person for development of the new restaurant.

The latest news, according to Michael, is the hiring earlier this week of Randy Lenger as general manager. Lenger is an experienced chef with family ties to southern Iowa who, among other accomplishments, helped launch Honey Creek Resort a few years ago as director of food and beverage services.

Lenger will head a staff of 56, according to Tim, six of whom (including Lenger) will fill full-time positions. So there's a good deal of hiring to do between now and spring.

The varied menu will be similar to that offered in other Hy-Vee Market Grilles --- an innovation launched a couple of years ago to bring upper-scale dining to the firm's super markets. I've been really pleased with the food and service at the big Urbandale Hy-Vee on the couple of occasions I've eaten there, and reviewers --- although a little disconcerted sometimes to find themselves enjoying a higher-end sit-down meal with wine (or beer) in a retail grocery setting --- have been consistently complimentary about the food, too.

The Charitone operation will be Hy-Vee's first (and perhaps only) free-standing Grille.

Although nothing is yet set in stone, according to Tim, the Grille most likely will open at 11 a.m. six days a week and at 10 a.m. on Sundays, and remain open until 10 p.m. --- somewhat later, until 11 p.m., on Fridays and Saturdays. Michael estimates that seating will be available for 80 to 100 patrons.

The bar area will be located in the west end of the first floor, with views of the square through those big arched windows; and the restaurant, behind similarly large windows that stretch along the south facade.

Others associated with the Charitone's ownership, Lucas County Preservation Alliance and Hotel Charitone LLC --- also were on hand Friday morning to provide updates --- Alyse Hunter, Ray Meyer and Christopher Watkins. Denny Bisgard, who set up the program, missed the meeting because of the arrival of a new granddaughter. Evelyn Hull, who manages the apartment end of the operation, and I were along for the ride. I'll be working on a book about Charitone history, due out (we hope) by midyear.

Alyse praised the good natures of the new tenants --- all 12 apartments are full and there are names on a waiting list --- who not only are test-flying brand new homes but also contending with the fact the first floor remains a construction zone.

Glitches occur now and then. Ray, for example, noted a couple of evenings ago that the big Charitone sign wasn't lighted and called Alyse, who added "we don't have hot water either." As it turned out, electricians installing new panels for Market Grille services had disconnected both --- problems quickly resolved.

The variable refrigerant flow heating system has performed well during one of the coldest Iowa winters in recent Iowa memory, however --- and the upper apartments have proved to be remarkably quiet.

Ray was able to report that an appeal for funding launched during November had proved successful --- by Thanksgiving, donations had passed the $1 million mark, the goal set by Hy-Vee when it committed $1.6 million to the Charitone project. Of that amount, $500,000 came from the Vredenburg Foundation, $100,000 from the Coons Foundation, and the balance from approximately 250 other donors.

The fund-raising effort continues, however, in an effort to raise the additional $200,000 that will be required to complete the project without long-term debt, Ray said.

Anyone interested in making a tax-deductible contribution to the Lucas County Preservation Alliance for the Charitone project is welcome to contact Hunter, Meyer or Bisgard in person; telephone (641) 774-2179; or write in care of P.O. Box 678, Chariton, IA 50049.