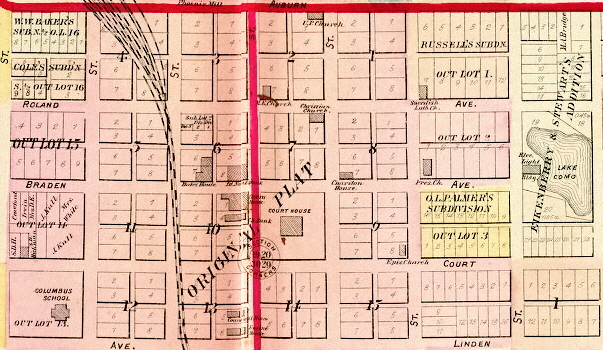 This plat of the Chariton square and areas adjacent is taken from the 1896 plat book of Lucas County, the earliest known land-ownership plat book for the county.

The old hotel that had opened its doors as the Opposition House in 1867 closed them for the last time as a hostelry thirty years later --- during 1898 --- under the name Commercial. It would suffer a final indignity, however, before being torn down --- missing the 20th century by only three months.

During May of 1899, owner Smith H. Mallory rented the vacant building to J.D. Taylor, formerly of Indianola, to be used "for the purpose of renovating feathers and manufacturing feather mattresses."

That operation lasted under four months and on Sept. 22, 1899, The Chariton Democrat reported, "The old Commercial hotel building on the northeast corner of the square, one of the old landmarks of the city, is being torn down."

Mallory moved immediately to construct on the site the 1900 equivalent of a 21st century big-box, built rapidly and without redeeming architectural merit. The new building was of frame construction and approximately 60 feet wide, stretching north along Main Street, by 120 or more feet deep, stretching east along Braden. Entrances were to the west. The whole affair was clad in sheet iron, some of which was molded into decorative flourishes.

The first and only tenant of the new building was the Palmer Department Store, a collaboration of Anna Palmer and her son, Charles H.

The Palmers had arrived in Lucas County from New York during the mid-1850s led by the venerable Phineas, a grocer who died here at age 97 during 1883. Son Oliver L. built the city's first brick retail building during late 1866 and early 1867 (the east-side structure most recently occupied by South Central Mutual Insurance is the oldest building on the square).

Son Thomas E., husband of Anna and father of Charles H., a tinner by trade, opened a general store elsewhere on the square soon after their arrival during January of 1855 and operated it until a financial debacle late in the 19th century left him bankrupt --- but due to some manipulating hardly broke.

During the glory days of the first Palmer store, Thomas and Anna became prominent in Chariton affairs and built a fine home in the northwest part of town that still stands although shorn of its decorative detail and crowded by newer structures. Thomas, born during 1821 in New York, had married Anna Wilson, a native of Yorkshire, England, in Brooklyn during 1845. Their children were Anna (Peck), Charles Henry, James (who died a young man in Chariton during 1870) and Grace (West).

Thomas E. Palmer became a good friend of Smith H. Mallory, who constructed the new department store building for the family on the Charitone corner. By some accounts (notably those of the late Bob Piper), however, Anna Palmer and Mallory's wife, Annie, didn't have much use for each other. According to Piper, Annie Mallory, when driving out in her carriage from the legendary family estate Ilion, routed her vehicle to avoid passing the Palmer home.

The second incarnation of the Palmer Store arose in 1891, financed by Anna Palmer and managed by Charles H. Care was taken to avoid having any property in the name of Thomas E. Palmer in case old creditors might decide to come after the new firm. It had operated in various rental locations on the square before moving into the new Mallory building during 1900. Once there, it expanded to become perhaps Chariton's largest retail operation.

The real estate itself changed hands three times during the next 10 years as Mallory circumstances changed radically. On June 10, 1903, as Smith Mallory was approaching death and in order to avoid inheritance taxes, the lot was deeded to the only Mallory child, Jessie (Mallory) Thayer.

Four years later, the Mallory bank, First National, collapsed during the fall of 1907 after trusted Mallory associate Frank Crocker killed himself and it became evident he had gutted it financially to fund ill-advised investments.

During 1909, Annie Mallory and Jessie (Mallory) Thayer admitted their liablity in the collapse --- due to inattention rather than intent --- and agreed to transfer all the property they owned in Lucas County to the bank receiver, fleeing to Florida soon thereafter. Jessie deeded the Charitone corner to the receiver on Sept. 16, 1909.

On Dec. 21, 1909, George W. Larimer --- another retail and real estate entrepreneur --- snapped the property up for what most likely was a bargain price.

Through all of this, the Palmer Department Store continued to operate without interruption. But the next decade would not be kind to the family.

Thomas E. and Anna Palmer died days apart during late May 1914. Thomas, age 93, was the first to pass, on May 27. Anna followed on May 30, age 89. Both had been active (Thomas as a clerk) in the store until very late in life. Joint funeral services were held on the lawn of the family home and burial in the Chariton Cemetery followed.

Less than two years later, just after 11 p.m. on Monday, Jan. 17, 1916, fire broke out in the Palmer Store and it burned to the ground. The iron siding doomed it. Firefighters could not penetrate the shell to douse flames consuming the frame interior. No cause for the fire ever was determined, although it seemed to have been set from the outside at the rear of the department store.

However, Charles's sister, Anna, cried foul at this point and both proceeds from insurance policies and ownership of the Palmer home and other real estate became tangled up in court cases, one of which eventually reached the Iowa Supreme Court. During those proceedings, it became clear that Charles H. Palmer had manipulated his aged mother into signing over to him more than his fair share of family assets. This family fight doomed retail prospects for the now vacant Charitone corner.

Charles H. Palmer retreated to the family home and lived as a recluse until his own death during 1925. He had married twice, but left no heir. The first marriage, during 1873, had been to the tiny (five-foot-three) but mighty Virginia M. Branner who, as an heir of John Branner was Charles's superior financially and, perhaps, intellectually and in terms of drive, too. She became one of Iowa's leading suffragists and excelled in many good works, being especially devoted to Fairfield's Parsons College. Charles divorced her during 1894 (she didn't seem to mind and reclaimed the surname Branner shortly thereafter), then tried marriage again, briefly, but failed a second time.

During 1917, G.W. Larimer built modestly in brick at the east end of the now-vacant lot --- a two-story double-front building that was known initially as the White Front Hotel and now as the Charitone Annex.

But most of the lot, prime real estate in a town booming with coal and a brand new north-south rail line, remained fallow until 1923.

Except during 1921 --- when the biggest religious revival seen before or since in the south of Iowa broke out somewhat unexpectedly on the old Charitone corner.
Posted by Frank D. Myers at 6:51 AM