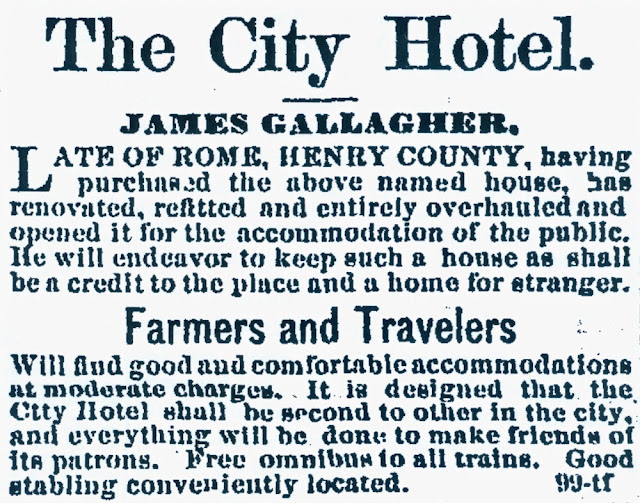 Note: This is the second installment of a series that began with "That old Charitone Corner (Part 1): Stained by sin." The advertisement was published in The Chariton Democrat of May 10, 1870.

James Gallagher and his wife, Catharine, who arrived in Chariton during the late fall of 1869 to set aright any wrongs Thomas Musselman may have inflicted on his neighbors while proprietor of the Opposition House, were immigrants from Ireland who had lived since the late 1850s at Rome in Henry County. Their family included three daughters, Mary, Margaret and Kate, all born in New York, and James's bachelor brother, Hugh.

James and Hugh most likely had found work grading and ditching (by hand) the route of the Burlington & Missouri River Railroad west from Burlington to Ottumwa. Rome was on the route, and construction had stalled there for a time during the line's early financially troubled years.

Incorporated during 1852 in Burlington, the goal of the B. & M. R. was to connect the Mississippi and Missouri rivers by rail, a project interrupted by war that required 17 years to complete --- finally in 1869. By 1854, much of the 75-mile stretch from Burlington to Ottumwa was under contract and construction had begun --- but financial problems plagued the project. The line did not reach Mount Pleasant (the Henry County seat) until July of 1856; Fairfield, during August of 1858; and Ottumwa, during September of 1859. The rail project then stalled at Ottumwa until after the Civil War.

Both James Gallagher and Hugh Gallagher were enumerated in the 1860 census of Henry County as laborers, but probably were feeling the financial pinch of irregular employment in addition to the urge to make better lives for themselves and, in James's case, his family.

This motivated James to open a dry goods store in Rome, invest its profits in other ways and by 1869 feel financially secure enough to consider a trade for Musselman's Chariton property, by then called the City Hotel. He also served as Rome postmaster during 1868 and 1869.

Hugh Gallegher, assessed at Rome during 1862 and 1863 for the taxes charged those who dealt in liquor, may have operated a bar there. He invested in the new Chariton business, too, and it was to him that the Chariton City Council on Oct. 25, 1869, issued a license to sell wine and beer.

The Gallaghers took over operation of the City Hotel during August of 1869 and by late September had refurbished it.

By late December, The Democrat was able to report that "The City Hotel, under the successful management of our genial friend, Squire Gallagher, seems to be doing a better business than any other hotel in town. Jimmy is always affable, accommodating and cheerful toward his guests."

In May of 1870, the Gallaghers inserted advertising in The Democrat that stated, "James Gallagher, late of Rome, Henry County, having purchased (the City Hotel) has renovated, refitted and entirely overhauled and opened it for the accommodation of the public. He will endeavor to keep such a house as shall be a credit to the place and a home for stranger."

A free omnibus was available to transport guests to and from trains, according to the advertisement, and for those who arrived by horse, "good stabling is conveniently located."

The Gallaghers seem to have quickly earned the respect of their fellow Lucas Countyans and soon after their arrival were active in organizing  its first Catholic parish, St. Mary's (now Sacred Heart).

A little more than four years after the family arrived, however, Catharine Gallagher died at the age of 55 --- on Dec. 15, 1873. She was among the first to be buried in the new St. Mary's Cemetery (now Calvary).

Finally, during November of 1874 --- five years after the initial suit had been filed in Henry County --- Musselman's allegation that the Gallaghers had defrauded him in the property trade for the City Hotel came to trial. The Democrat of Nov. 14 reported, "On Wednesday, the famous old chronic case of Thomas Musselman vs. James Gallagher, which has been pending for over five years and which has worn out a generation of lawyers --- three of the attorneys in the case having died and the rest nearly so --- was taken up for trial. McClanahan & Mitchell for plaintiff and N.B. Branner & Dungan & Crane for defendant."

After all that time, expense and effort, the jury ruled in Gallagher's favor --- but awarded him a judgement of only one cent.

James remarried during July of 1875  --- to the widow Catharine Anne (Roder) Maniett. Catharine was a native of Bavaria who had arrived in the United States at the age of 20 in 1843, and had married Joseph Maniett, a native of France, in Washington, D.C., during 1852. Joseph and his brothers, Antoine and Frederick, were operating the Maniett Brothers' Iron Foundary in Washington when the marriage occurred.

Joseph and Catharine and their family arrived in Chariton during June of 1869, where his occupation was given in the 1870 census as "iron moulter." Only four of their 10 children were living in that year --- Kate, Mary, Joseph and Henry.

Daughter Mary died at Chariton on Jan. 28, 1871, age 20, and because there was no Catholic cemetery in Lucas County, her body was taken to the consecrated graveyard of St. Patrick's Church, Georgetown, for burial (circuit-riding priests then serving the new St. Mary's parish in Chariton were headquartered at Georgetown).

Joseph died three years later, on Jan. 22, 1874, at the age of 56, and his body was taken to Georgetown for burial, too --- beside Mary --- although St. Mary's Cemetery in Chariton now was available.

Joseph had left Catharine well provided for and James had prospered, so they settled together on a farm just west of Chariton in White Breast Township where they lived for the balance of the 19th century. James served as justice of the peace and held other township officies, living up to his honorary title of "squire."

On June 6, 1879, 10 years after they had purchased it, James and Catharine Gallagher and Hugh Gallagher transferred ownership of the City Hotel and its lot to Smith H. Mallory, Chariton's leading enrepreneur of that era.

Although the Charitone corner was prime real estate, the old frame hotel was less so. The three-story brick Bates House, a block and a half west on Braden Avenue, now catered to the more elevated lodging trade; and the Depot Hotel, located above the new C.B.&Q. depot, provided the equivalent of a 19th century Super 8. All of the vintage hotels on the square --- too large to serve as boarding houses and too outdated to attact discriminating guests --- were struggling. All eventually would go out of business.

Mallory leased the hotel to a variety of operators as the years passed. The Democrat of Feb. 23, 1888, reported for example that "a new sign on the northeast corner reading 'Chariton Hotel,' announces the fact that Mr. S(eth) Lewis has opened up the hotel there, which has been unoccupied for several months. The house has been thoroughly renovated and repaired, and with Mr. Lewis as landlord will doubtless draw a good trade."

As it turns out, there was considerable doubt after all and a year later, on Feb. 27, 1889, the Patriot reported that "Mr. Mallory is repairing, papering and painting the Chariton Hotel on the northeast corner of the square. W.F. Haynes will ocupy the same and expects to run a first class hotel at reasonable prices."

As late as 1896, the old hotel continued to stagger along as the Commercial. Soon thereafter, however, Mallory tore the old building down, ending more than 30 years of hostelry history.

Joseph and Catharine Gallagher expired at approximately the same time their former hotel did. Catharine, then 78, died on on Feb. 7, 1901, at a hospital in Davenport, where her youngest son, the Rev. Henry Maniett, was on the faculty at St. Ambrose College. Her body was returned to Chariton where the funeral Mass was held and burial took place next to the first Catharine Gallagher at Calvary Cemetery.

Although James Gallagher survived his wife, exactly what became of him after her death isn't known. There is no report of his death in Lucas County newspapers, nor is he buried here. Most likely, he went to live with one of his daughters who lived elsewhere and died there.

Nor is there any clue about what happened to James's brother, Hugh. Although I'm sure they didn't, both seem simply to have vanished.

Find A Grave records show a James Gallagher who fits the general bill --- born Sept. 15, 1818, in Ireland; died of senility Sept. 9, 1902 --- buried alone in Seattle's Calvary Cemetery. The chances of this being our James, however, are problematic.
Posted by Frank D. Myers at 5:58 AM