That Charitone Corner, Part 4: Washed in the blood 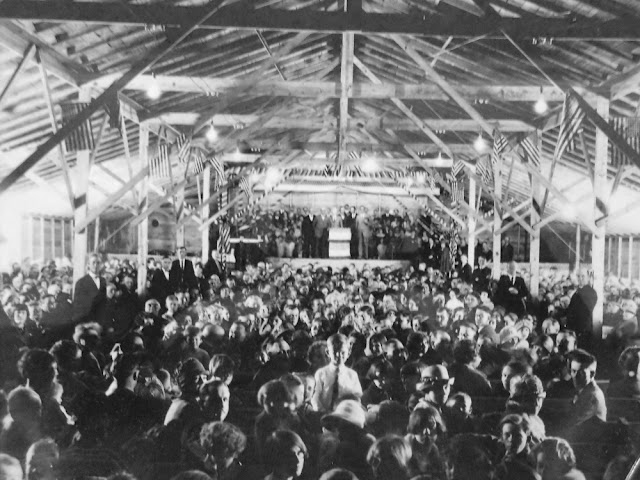 This photograph, in the Lucas County Historical Society collection, was taken inside the gospel tabernacle during one of the 1921 meetings. The quality is not great, mostly because I was shooting through the glass cover of a framed image.

If that old Charitone corner got off to a shady start back in the 1860s with the Opposition House hotel, any stain that may have remained 50 years later surely was washed away during 1921 by the biggest (and longest) series of revival meeting the south of Iowa ever had seen. Tens of thousands streamed into Chariton from across the region during its six-week run, hundreds "hit the sawdust trail" and one unfortunate opossum gave up its life during the "possum kill" for kids.

To recap, Thomas Musselman built the Opposition House on this site during 1867 ("Stained by Sin"), then sold it to Squire Jimmy Gallagher as the City Hotel ("Gallagher Years"). Gallagher sold the hotel to Smith H. Mallory during 1879 and Mallory tore it down during 1900, building on the site the Palmer Department Store building, which burned to the ground during January of 1916 ("Cleansed by Fire"). George W. Larimer, who owned the Charitone lot when the fire occurred, built a double-front brick building called the White Front Hotel at the east end of the now-vacant lot during 1917 ("The Charitone Annex").

But a majority of the lot lay fallow as 1921 dawned, awaiting possibilities.

EARLY IN THAT YEAR, the preachers of Chariton's big five churches --- First Methodist, First Baptist, First Presbyterian, First Christian and the Evangelical United Brethren --- decided the city was in need of revival. Catholics seem not to have been invited. High-church protestants --- Lutherans and Episcopalians --- seem to have declined.

During May, the preachers approached Fairfield's remarkable Alphonso King "A.K." Harper, founder during 1900 of Harper Brush Works and, during 1910, of the Businessmen's Gospel Team. That team consisted of "a number of prominent business men of Fairfield (and elsewhere) representing different creeds, who give portions of their time to the work."

Harper was a Methodist layman filled with evangelical fire (mandatory religious services were held daily at his plant in Fairfield) who with the aid of his Gospel Team commenced large-scale lay-led revival meetings across Iowa and elsewhere, gaining momentum after World War I ended.

The team's big revival of 1920 had been in Creston. Harper and his team signed on to revive Chariton. Lucas County's 1921 version would make the Union County event look like a Sunday school picnic.

DURING MID-SUMMER, the schedule was announced --- daily revival meetings (except on Mondays) would begin Sunday, Sept. 11, and continue into  late October. The gospel tabernacle would be built on G.W. Larimer's largely vacant Charitone corner.

Although sponsoring congregations were expected to whole-heartedly support the revival, no up-front cash commitement was required. The Gospel Team paid all of its own expenses, including supplies that would be needed to build the tabernacle. Team members, who conducted the meetings, received no reimbursement. Collection-plate proceeds, as well as donated time and money, kept the operation afloat.

By Sept. 8, the tabernacle was nearly ready. The Herald-Patriot of Sept. 8 reported, "The erection of the big tabernacle on the northeast corner of the square is going forward as fast as possible with a large force of volunteer carpenters under the direction of Mr. A. J. Swanson of Fairfield. The men of Chariton have responded in a splendid manner and the tabernacle will be completed at the end of the third day of work, which will be tonight. Every man on the job is donating his time to the cause ... and women of the churches have been serving meals to the men during the work. When the tabernacle is completed it will be 60 by 110 feet and will seat about 1,500 people, with a platform for a chorus of 250 voices. The building will contain about 20,000 feet of lumber and is erected in such a manner that very little of the lumber will be spoiled for further use. The lumber is purchased outright by Harper and at the end of the meeting will be sold to the highest bidder."

In addition, the Southern Iowa Electric Co. had agreed "to give gratis all the lighting necessary to light the tabernacle during the meetings."

Every day of the six-week revival --- with the exception of Mondays set aside for rest --- would be filled with preaching, praying, singing, testifying and outreach in large- and small-group settings. On Sundays, sponsoring churches were to hold Sunday school in their own buildings, then dismiss and gather in the tabernacle at 11 a.m. for a union service. Men-only Sunday afternoon meetings were held in the tabernacle; women-only meetings in churches. Prayer meetings and small-group outreach sessions were held daily. The main events on Sundays and Tuesdays-Saturdays, however, were the evening revival meetings, each expected to last for hours.

In addition to Harper, Gospel Team players included Gust "the big Swede" Scott, vocalist and music director. An orchestra and mass choir were features of the evening meetings. The Gospel Team claimed to have discovered Gust while driving by the cornfield he was harvesting --- while singing --- near Lockridge, Iowa, one fall several years earlier. His biggest hits included "The Old Rugged Cross" and "And the Old Flag Never Touched the Ground."

Also on the team was Eugene Palmer, who "when quite a young man served in the U.S. Cavalry and after his discharge returned to his old home in Ottumwa, and followed the occupation of a professional gambler, and obtained a position in the big gambling house that in the palmy days of Stormy Jordan and wide-open Ottumwa flourished beneath the Ballingall hotel. In the fall of 1908, Mr. Palmer was converted during the Billy Sunday meetings in Ottumwa, and united with the church, since which time he has been a very active worker ...."

Although Harper always was the lead preacher, at least six others (all laymen) led services during the six-week run.

EXCITEMENT ESCALATED as Sept. 11 approached. That evening, a crowd estimated at more than 2,000 people turned out, astonishing everyone. About 1,700 were squeezed into the tabernacle --- heated with stoves because the evenings were getting chilly --- and the remainder were turned away. The orchestra and mass choir performed, Harper preached and it began to look as if Chariton really might be revived.

During the next week, a tabernacle addition that would hold five hundred more people was built. By the next Sunday, crowds had grown and overflowed the expanded quarters. A second addition was made to the tabernacle during the week that followed.

In addition to tabernacle services, a variety of related events were underway in Chariton. Early Sunday mornings, truckloads of singers drove through the streets seranading residents with revival hymns. "Cottage prayer meetings" were held daily throughout town. At 9 a.m. daily, Harper annd others delivered 12-minute talks to businessmen at various locations around the square.

At that time, fire and brimstone were considered appropriate tools for use in scaring the hell out of prospective converts. Much to everyone's surprise, however, there was none of that during the first two weeks of services, not even altar calls. Instead, the Herald-Patriot reported, Harper "laid a broad foundation for his work in talks on Christian living, good citizenship and everyday morality."

Invitations to "hit the sawdust trail ... and "take their stand for Christianity," were extended to overflow crowds beginning during the third week of services, however, and were "pushed nightly" as the intensity of the revival increased.

One Saturday during early October was "devoted to the children. Mr. Harper, assisted by Messrs. McClelland, Palmer and Roth, led some 87 boys out on a hike which ended with a weiner roast and a possum kill. The photograph of the boys and the possum was taken in the afternoon and 65 of the boys were Mr. Harper's guests at the football game."

Harper spoke on "Amusements" one night --- described as among the most important of the revival sesries. Nearly a thousand reportedly rose to their feet to "pledge themselves not to play cards, dance or attend theatrical performances."

Similar pledges were made on Temperance Day when the sermon theme was "Booze or You" and  a male quartet performed a "dialect" song, "De Brewers' Big Hosses."

On Sunday evening, October 9, Harper appeared before a packed house apparently distraught and in tears, accusing the audience of insufficient commitment to the revival. Preachers from participating churches chimed in and the "fire of religious zeal swept the meeting.... Men rose to their feet and with tears in their eyes pled guilty to the charge that their full duty had not been done and pledged themselves to do all in their power to uphold and strengthen the hands of Mr. Harper and his fellow workers, and to make this a revival which shall be remembered in Chariton for years to come."

Apparently reassured, the Gospel Team fanned out during the next week, visiting Russell, Lucas and Corydon. Attendance at evening meetings soared and plans were made for four great meetings on closing day, Sunday, Oct. 23 --- the union meeting at 11 a.m., men's meeting in the tabernacle at 3 p.m., a women's meeting at the same time in a church sanctuary and the concluding meeting that night.

That closing meeting lasted five hours --- from 7 p.m. until midnight. Those converted during previous meetings were expected to attend. The orchestra played; the mass choir sang, Harper preached.

According to the Herald-Patriot, "The audience rose, sat, raised their hands, bowed their heads in prayer, lifted their voices in song at the behest of the guiding spirit of the meeting. Converts, coming down the aisles with bowed heads were greeted with shouts and applause. The many converts of earlier meetings left their places and, joining hands, formed a living chain of enthusiasm around the building ...."

"As the hours passed many were obliged to leave, but at midnight, when the last song had been sung and the last prayer uttered, nearly one thousand people remained to say good-bye to Mr. Harper and his workers."

WHEN ALL WAS SAID and done, Harper reported that 503 souls had been saved during the six weeks and that crowds had totaled 60,000, roughly 10,000 a week.

The Gospel Team left Chariton by train bound for Fairfield the next morning.

The tabernacle was sold soon thereafter for $650 to the Chariton School Board, used for athletic and other events during the winter, then torn down and its lumber recycled.

It's not clear what the long-term results of the revival were, but life soon returned to normal in Chariton. Efforts to form a "Chariton Gospel Team" foundered.

A.K. Harper survived until 1970, when he died at age 91 with by his own estimate 33,000 souls notched on his belt. Harper Brush Works survives still, although it passed from family hands during Chapter 11 bankruptcy proceedings in 2012.

The next great enthusiasm in Chariton, commencing during the spring of 1923, was the Ku Klux Klan. Some of the churches, preachers and people involved in the great revival of 1921 were involved with the Klan, too.

Klan activity peaked the following year, 1924, when during August a regional "konklave" attracted what reportedly was the largest crowd ever assembled on the Chariton square.

By this time, the new Hotel Charitone stood on the former site of the 1921 gospel tabernacle as witness.