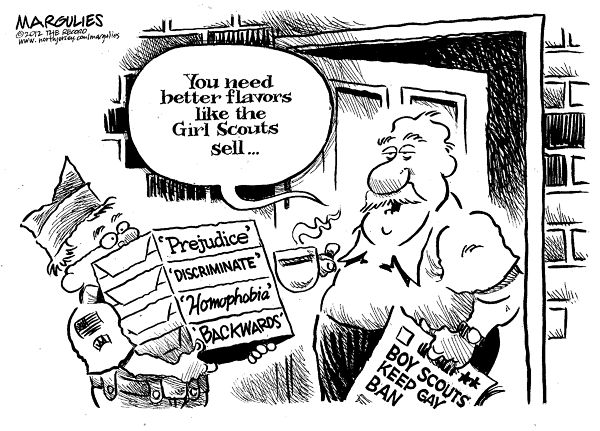 I see that The Register has a story here this morning exploring minimally how some Iowans involved with Boy Scouting are reacting to the proposed policy change regarding gay scouts and leaders that will be voted on during May.

Most who follow such things are aware that scouting's leadership proposed some time ago dropping unilateral bans on gay scouts and leaders, leaving such decisions up to local councils, then in the face of intense wailing and gnashing of teeth from Baptists and others among the usual suspects held off. The apparent feeling was that a gay scout in Connecticut could inflict unimaginable damage in Mississippi.

The current compromise would allow gay scouts in, but maintain the ban on gay leaders. That sort of sends the message, "yea, we'll tolerate you, you dirty little bastard, but come that 18th birthday you're outa here."

Interesting point No. 1 --- No one seems to have proposed lifting the Boy Scout ban at all levels on atheists and agnostics. So whatever happens, American manhood will be safe from those nasty heathens, large and small.

Interesting point No. 2 --- Girl Scouts leave all of this stuff to scouting families and ban no one. That (a) demonstrates how much more sensible women are in many instances and (b), since outcries about Girl Scout policies are rare, suggests that society still as a rule cares considerably more about its little princes, up there on potentially patriarchal pedestals.

Of course the scouts can do what they want --- scouting is a private membership organization. But maybe the guys should invite the Girl Scout leadership in to show them how to get themselves out of the hellish hole they've dug themselves into.

There was a minor tempest in a teapot last week in the Iowa House involving five of its whackiest (aka Republican) members who introduced an amendment to a judiciary finance measure that would have cut the salaries of four of our Supreme Court justices who participated in the unanimous 2009 ruling allowing same-sex marriage. In didn't go anywhere, of course, in part because many Republicans really aren't that stupid.

But it does look like we've now got crazy-eyed bookends here in central Iowa, from south to north. One of the sponsors was Tedd (with two d's) Gassman, of rural Scarville, who represents a house district skimming the Minnesota border; two others, our own Greg Heartsill (who represents eastern Lucas County) and Larry Sheets of Moulton, whose districts skim the southern border.

I actually knew Tedd back in the day when he was a teacher and coach at the now-defunct Thompson Community School, then moved on from there to sell Farm Bureau insurance.

I love this sort of thing because it so effectively enhances Iowa's Republican image as the party of buffoons. And that can be nothing but good news for Iowa Democrats.
Posted by Frank D. Myers at 7:01 AM