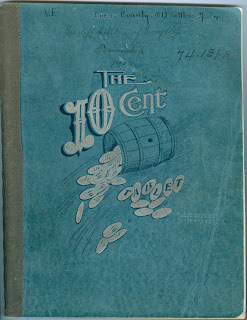 Thomas M. Dunshee, collecting the history of English Township's pioneers at the turn of the 20th Century, wrote to Allen Jacobs of Athol, Kansas, for information about Jacobs' father-in-law, John Ballard, first settler both of English Township and Lucas County. Ballard arrived in English Township during the spring of 1846, broke prairie and built a cabin, then brought his family into the new territory during September. A little later that fall, the Freeman Nickerson family party --- fleeing Nauvoo --- found refuge at Chariton Point. These were the only known EuroAmericans in Lucas County during that winter.

Jacobs' letter to Dunshee, dated Sept. 6, 1904, was published at Dunshee's behest in The Chariton Leader of Nov. 24, 1904, and rather than transcribing it, Dunshee pasted a copy of the published material in his English Township Pioneers notebook. Note that although Allen Jacobs says his marriage to a Ballard daughter was the first marriage to occur in English Township, it seems to be recorded in neither Lucas nor Marion county.

LUCAS COUNTY'S EARLY HISTORY
Some Valuable Information by One of the Early Settlers
Allen Jacobs Writes Entertainingly of Events Now Recorded in Past History
From The Chariton Leader, Nov. 24, 1904


Wishing to gain some information in regard to the early history of Lucas county, Mr. T.M. Dunshee of English township recently wrote to Mr. Allen Jacobs of Athol, Kansas, a former resident of English township and also of this city, making some inquiries, and in reply received the following excellent letter which contains much valuable information and which we believe will be of great interest to all our readers:


Dear Sir: In reply to your request I will try and give you all the information I can, as I am interested in the history of English township somewhat myself. John Ballard, the first settler in Lucas County, was of German descent, born 1799. He was raised in Tennessee and after marriage moved to Kentucky, and from there to Illinois, thence to Van Buren County, Iowa, thence to Missouri, thence to Appanoose county, Iowa, and from there to Lucas county, Iowa, in the spring of 1846. He put up a small shanty and broke out ten acres of ground and planted it in corn. That was about half a mile east of the mouth of the creek called East English. Then he went back to his former home at Dodge's Point (west of Iconium in Appanoose County - FDM) and moved his family to his shanty in September of that same year. The family consisted of himself, his wife, two sons and four daughters. The youngest child was but six weeks old at that time. Mr. Ballard was the first settler in that township, also the first settler in the county, but after he settled there a family of Mormons built a cabin at or near what was known as Chariton Point, perhaps a mile and a half south of Chariton. They wintered there and went on to Salt Lake City the next spring. They only spent the winter in Lucas county and as there was a quantity of game they had plenty to eat.

In the spring of 1847 Mr. McDermott settled over on Cedar Creek. He was a good boot and shoe maker and made for me the best pair of boots I ever hand. Ballard sold his first claim to a Mr. Fowler and took a claim on section one, same township, 73, range 21 west. His nearest neighbor was six miles away in Marion County.

Perhaps in the fall of 1847 John Mercer settled within one mile of Ballard. His brother, James A. Mercer, came with him and in 1848 or 1849 the latter and Ballard's eldest daughter were married. They had to procure their license at Knoxville and went over the line into Marion county where they were married by a preacher by the name of Pearsall.

Hiram Moon preached the first sermon in English township at the home of John Ballard. He was of the Christian persuasion, better known as Campbellite. Bramlet Hurt was the third settler in the township. John Ballard's whole family consisted of five sons and five daughters but two were dead and two had left home before he moved to Lucas ocunty. David Ballard settled there in 1854. Isom Hodson, Isaac Renfro, Isaac Cain, Nelson Cain, Hiram Wallace and his brother Charles, Joseph Ross, Elijah Crandall, Thomas Crandall, Jesse Spray, Jesse McMullen, James Cruse, and a few others whose names I do not recollect, were early settlers.

There were no Indians there but there were about 75 in camp at the mouth of East English, where their camp had been the year before. They were there on a hunt in the fall of 1848 and got snowed under so they could not get away until the next spring. That was the winter of the deep snow.

The first time Ballard went to mill after he settled in Lucas county, he had to go to Oskaloosa. Afterwards he got his grinding done on Big Whitebreast, not far from Knoxville. The first death in the township was that of James A. Mercer's second child. The first marriage that was performed in the township, to the best of my recollection, was my own to Ballard's third daughter, which took place on December 2, 1854. We were married by a man by the name of John P. Newman, who lived in the same township about three miles from John Ballard's.

There were other marriages in the county before my marriage, but mine was the first in the township of English.

The first timothy was sown by Isaac Cain but was not a very good success. The first wheat was raised by John Ballard, and fall wheat made 25 bushels per acre.

John Ballard and James A. Mercer built the first house that was built in Chariton in 1849.

If there is anything more of interest that you wish to know, write to me and if I can be of any service, I will gladly do so.


Yours as ever,
Allen Jacobs
Posted by Frank D. Myers at 6:40 AM