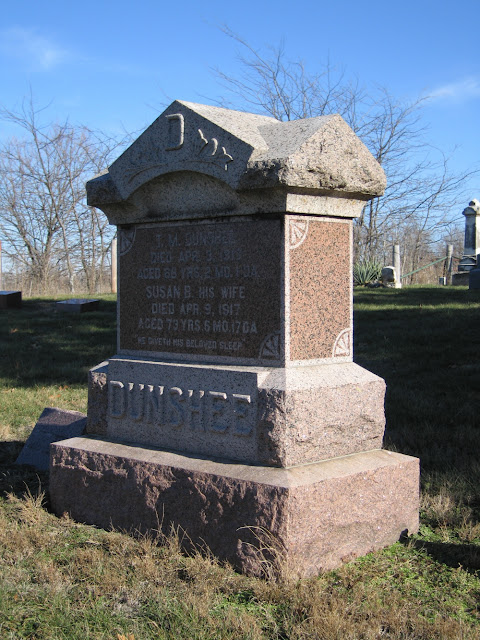 This is the thirteenth in a series of biographical sketches and articles written or edited by Thomas M. Dunshee between 1903, when he began collecting the material, and 1910, when he finished entering the sketches in a small blue "tablet" notebook now in the Lucas County Historical Society collection. The subjects all were fellow pioneers in the Newbern neighborhood of English Township, Lucas County.

Soon after the war of the thirteen colonies with England, there came to the United States two Irish boys, William & Thomas Dunshee, of age of eighteen and twenty, from County Down, Ireland, landing in New York City. They sought employment in the metropolis; failing in this, they turned their steps westward, William going out into the unsettled regions of York State; Thomas pushing out to the frontier of western Pennsylvania. (He) settled in Washington county, twelve miles from the city of Pittsburgh. The brothers never met afterward.

Thomas Dunshee was able to purchase a piece of land which he improved. After a time he married Mary McLoney, of Irish descent. They had six children: William, Luke, James, Thomas, John and Margaret. James Dunshee was born in Washington County, Penn., May 26, 1813. When he was eighteen years old his parents emigrated to Richland Couty, Ohio, and bought a farm near Lexington on the clear fork Mohican. Here they lived until their deaths.

James Dunshee, their son, at the age of thirty years was married to Mary Moore Marshall, whose age was twenty years, a daughter of James and Janet Marshall of Richland or Knox county, Ohio. James Dunshee and wife lived on the home place near Lexington for several years. Here Thomas Marshall was born Feb. 2, 1845.

In the fall of 1853 they sold their place and moved to Iowa by covered wagon, a distance of 600 miles, where they landed in Washington County, Iowa, late one evening in October, remaining over winter. The next spring, in May, they moved to Davis County, Iowa, on a farm of 160 acres purchased of James Gass one mile east of Troy. Here James lived for thirty-two years and died April 19, 1886. He was a prominent figure among the early settlers of Davis County. Thomas Marshall lived on the home place until he was twenty-three years of age excepting four years spent as clerk in a drygooods house in Troy.

He was married February 20, 1868, to Susan Bonar of Richland County, Ohio. She was born September 23, 1843, of Irish and German descent. They moved by covered wagon to Lucas County where they landed the 14th day of March 1868 and settled on land purchased of Calvin Alexander in section seventeen of English Township.

English Township was comparatively new when the Dunshee family in the spring of 1868 sought a home within her borders. Must of the land was still covered with the native prairie grass. Very few of the old settlers of forty-two years ago are to be seen today. Their familiar faces are gone, many rest under the sod in the neighborhood where their presence used to be a plasure to their friends.