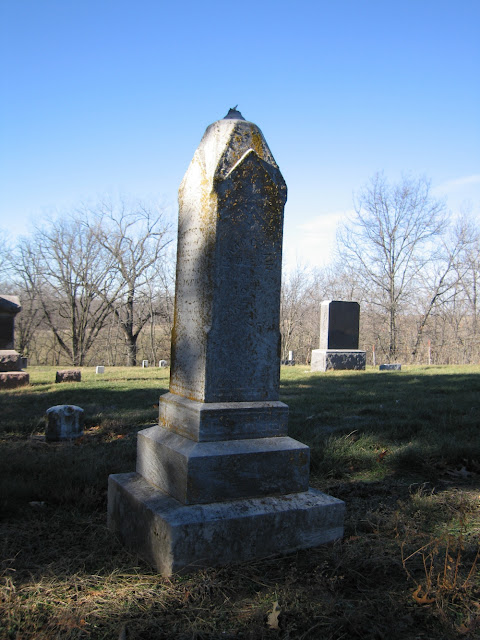 Isaac C. Cain and his wife, Elizabeth, share this tombstone at Spring Hill Cemetery, three miles south of Newbern. A Presbyterian church sometimes called the Cain Church had been built nearby during 1875 and this cemetery served its members and their neighbors. Isaac died Aug. 1, 1908, at age 82. His wife, Elizabeth, had died 20 years earlier, on June 2, 1888.

This is the fourteenth in a series of biographical sketches and articles written or edited by Thomas M. Dunshee between 1903, when he began collecting the material, and 1910, when he finished entering the sketches in a small blue "tablet" notebook now in the Lucas County Historical Society collection. The subjects all were fellow pioneers in the Newbern neighborhood of English Township, Lucas County. This entry is in two parts --- the text of a brief letter dated 1904 from Isaac C. Cain within the main text and a printed version of an expanded letter, dated 1905, pasted into the back of the notebook.

My grandparents on my father's side (were) Abijah Cain, Irish, and Martha Cain, (of) Englilsh descent; on my mother's side, Charles Mcglothlin, Scotch, and Jane Davis, French, all of whom immigrated from North Carolina to Kentucky, then to Ohio, then to Fountain County, Indiana. 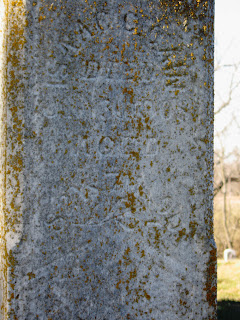 There George Cain and Rebecca Mcglothlin, my parents, were married and I was born December, 1825. There I lived to the age of 16 years. In 1841, I moved to Monroe County, Iowa, where I was married to Elizabeth Leeper in November 1848 at the age of 23 years. (Monroe County did not open to Euro-American settlers until the spring of 1843, so the date "1841" is not accurate.)

The year 1851 was the year of the flood disabling all mills. All got out of bread stuff. I and my family had to boil corn in the ear until soft, then grate it, making meal. Thus we got our bread stuff for some three weeks.

The year 1847 to 1848 were the dryest I ever saw. In Iowa, the prairie grass dried in August until it burned readily. The ground cracked open until we could run stucks down four to six feet, these cracks running east and west across the divides.

Myself and Pleasant Williams built the first sawmill in Lucas County, a water mill on White Breast.

Ransom Davis, Joseph Stuart and myself built a steam mill in Newbern when I first came to the country. Old Tommy Wilson was the first store keeper. About this time, Wescoat & Waynick came and located in Chariton.

I built a cabin in Lucas county at Newbern; moved into it when only half floored, no chimney, no daubing and no door. It snowed within two days. The floor was hewed puncheons.

The farm which I owned contained 160 acres situated in Sections 5 and 6 (and) was afterward known as the Michael Fry place. I fenced 60 acres the first winter and the next summer broke out 125 acres.

We bought most of our merchandise at Eddyville and made two trips to the Mississippi river, one to Keokuk and one to Burlington. Later, I made two trips down into Missouri, a distance of 200 miles, for apples, selling them at $2 per bushel.

See letter from Isaac Cain to T.M. Dunshee taken from Chariton Leader/back part of this book.

BACK TO THE PIONEER DAYS
Isaac Cain Writes of his Early Experiences
There Were Privations and Hardships to Be Endured But It Makes a Happy Retrospect
Taken from Chariton Leader, June 15th, 1905

The local society of English township is collecting early history and sketches of pioneer settlers. Isaac C. Cain, who is perhaps the oldest settler in Lucas county, now temporarily in Washington, contributes the following which is handed us by Marshall Dunshee:

In accordance wtih my promise to give some facts in connection with the early days of English township and my family parentage, I write you. My grandfather, Chas. W. McGlothlin, was of Scottish origin, and Jane Davis, his wife, French; and my grandparents on the other side were Abijah Cain, Irish, and Martha Cain, his wife, English. This forms a cosmopolitan parentage. They all emigranted from North Carolina to Kentucky, thence to Ohio and from there to Fountain county, Indiana. There George Cain and Rebecca McGlothlin, my parents were married, and there I was born in Dec. 1825, and emigrated to Iowa with my parents in 1841, settling in Monroe County, where I was married to Elizabeth J. Leeper in Nov. 1848. Our first child, C.J. Cain, was born in said county Dec. 20, 1849.

I came to Lucas county and pre-empted land in August, 1850, and moved there in September of the same year. There were only four families living between Knoxville and Chariton and none between Newbern and Chariton at that time --- a distance of 38 miles.

The land which I had pre-empted joined Newbern on the south and east and my house was built of logs. We moved into it before it was completed. The puncheon floor was only half laid, no chinking between the logs and no door when a severe snow storm caught us. Besides we had no stove; no chimney. It also found us without a stable for my team. My cabin was the first house where the town of Newbern now stands.

Ransom Davis laid out the town of Newbern and built the first house after mine. Rev. Joseph Howard was the first minister of the gospel in the township and settled on land adjoining mine on the west. This was in the same year we came. He was the first postmaster. The first church built in Newbern was by the Methodists. Then came the Cumberland Presbyterians and after them the United Brethren.

My first crop of winter wheat in the county made eighteen bushels per acre and was cut with a cradle. William Stuart and Sanford Smith cut ten acres of wheat in one day. This was near Newbern.

Pleasant Williams and myself built the first mill in Lucas county --- a saw mill on the Big White Breast; later it was changed into a grist mill. I burned the first lime in the county, on Long Branch in English township. The first potters ware made in the county was by Nelson Cain, on English Creek.

The year 1851 has been designated as the year of the flood. It began to rain on the 8th day of May and continued until all streams were impassable, there being no bridges. Our family loaned present supply of flour and meal as none could get any ground. We then boiled corn grown the year before, grated it and thus made our bread for six weeks.

I think I sowed the first timothy seed in the county. It was thought by some that it would not be a success, yet I got a good crop.

Wolves were very plenty. I have seen as many as five together in the month of February in the early fifties.

Settlers were very sociable and if a log cabin was ready to be raised the neighbors would turn out and help, often without invitation.

Dr. Chas. Fitch began the practice of medicine in Lucas county and as bridges and fords weres scarce he traveled much on horse back, stopping at cabins when hungry for milk and corn bread. If the folks were not at home he would help himself and feed his horse anyway. The doctor loved to tell of those days and laugh. He came to my house one very hot day and found no one at home. He was very sick, and had tied his horse and laid down in the shade and when I came home (I) found him trying to vomit but it seemed he could not. I fixed him a pallet and advised him to take a vomit, saying "that is what you would do with me." "Yes," he replied, "I could give it to you but it would make me so sick. Give me some warm water." He had lost his hat in tying his horse, which I found for him, and after he had recovered from his sun stroke he started for his home in Chariton.

I have spoken of the Rev. Joseph Howard. He was a zealous Cumberland Presbyterian and did not like to baptize by immersion. At a protracted meeting he had previously held one of the converts desired to be baptized by immersion. This meant to either comply or lose a member, so the time was set and the place, a neighboring stream, selected and a goodly number of people were present to witness the ceremony, partly on account of the adverse sentiments of the preacher and for other reasons. The minister waded out into the stream with the convert and proceeded to administer the sacrament, but in some unaccountable manner the subject got away from the old man and made his way to the nearest shore, while the preacher was assisted up the opposite slope, remarking as he reached terra-firma: "I didn't believe much in it, nowhow." Thus unceremoneously terminated a meeting that failed of its original purpose.

We bought most of our store goods at Eddyville. I made two trips to the Mississippi River --- to Burlington and Keokuk. Later two trips to Missouri, 200 miles, for applies which I sold at $2.00 a bushel.

The years 1847 and 1848 were the dryest I ever saw in Iowa. The prairie grass dried in August until it burned readily. The ground cracked open until we could run sticks from four to six feet. These crevices ran east and west across the divide.

Ransom Davis, Joseph Stuart and myself built a steam mill in Newbern. Old Tommy Wilson was the first store keeper and about this time Wescoat & Waynick located in Chariton.