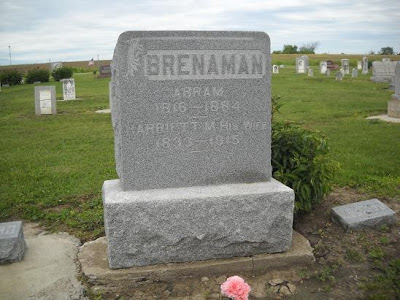 This photograph of the tombstone Abram and Harriett Brenaman share in Brownlee Cemetery was taken by Doris Christensen for the Find A Grave Web site.

This is the ninth in a series of biographical sketches and articles written or edited by Thomas M. Dunshee between 1903, when he began collecting the material, and 1910, when he finished entering the sketches in a small blue "tablet" notebook now in the Lucas County Historical Society collection. The subjects all were fellow pioneers in the Newbern neighborhood of English Township, Lucas County. Note that Dunshee spells the surname "Brenneman." The Lucas County family for the most part has spelled it "Brenaman."

Abram Brenneman was born in Huntington County, Pennsylvania, in August 1822 (tombstone date is 1816), of German and Irish parentage. In early manhood learned the carpenter trade. It was during these years that he met with an accident that came near costing him his life. Was working on a building when the scaffold gave way, precipitating him a distance of sixty-five feet onto a pile of rock, breaking one of his legs and otherwise injuring him so that it was months before he was again able for duty.

At the age of twenty-five he came to Iowa and settled in Jefferson County. Bought 80 acres of land near Fairfield, afterward traded this land for a saw mill in Batavia. This was a bad investment for him, as he lost about half what he at the time was worth. Getting a chance to change the mill for land, which he afterward traded for land in Lucas County. This land, 160 acres in Section 20 of English Township, afterward became his home.

Mr. Brenneman was married to Harriet(t) Violet of Jefferson county, Ia., March 27, 1851. She was born in Pike County, Ohio, March 19, 1833. At the age of twelve years she came with her parents to Iowa. They have had ten children: J. Milton, Clay, George, Hardin, Samuel Violet, Ulysses Grant, Henry Sherman, Clara Eunice, Elmer Quinn and Stella Blanche.

They emigrated from Jefferson County in the spring of 1856 to Lucas County and settled on the land he had purchased in Section 20. This land was unimproved. They had to move into a cabin just north of them on the Newbern road. Here they stayed until they could put up a house and stable, when he moved onto his own, where he lived until his death, which occurred Nov. 6, 1884.

Mr. and Mrs. Brenneman knew what it was to endure the hardships of pioneer life. New Years day 1864 was so vividly impressed on the minds of the settler on account of the suffering caused by the intense cold and high wind prevailing at the time. Lots of cattle perished.

During these years there was a common tie that made neighbors friendly and helped to make hard conditions bearable, so much so that the old settlers in summing up memories of forty and fifty years ago think those days were his or her best and most enjoyable days. Mr. Brenneman was a republican. His death was mourned by a large circle of friends.
Posted by Frank D. Myers at 5:47 AM