This is the eighth in a series of biographical sketches and articles written or edited by Thomas M. Dunshee between 1903, when he began collecting the material, and 1910, when he finished entering the sketches in a small blue "tablet" notebook now in the Lucas County Historical Society collection. The subjects all were fellow pioneers in the Newbern neighborhood of English Township, Lucas County.

Isaac Kinsey was born in Cass County, Michigan, Sept. 6, 1830. His father, Jacob Kinsey, was born in Pennsylvania, moving in early manhood to Ohio where he spent several years. From there he came to Michigan and lived a number of years, when he moved to Porter County, Indiana, and died there. 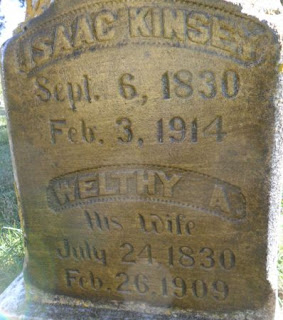 Here his son Isaac lived to manhood and at the age of twenty-two was married April 1st, 1852, to Rachel Worley of Crawford County, Indiana. He lived here for a couple of years. In 1854, with his family, (he) came to Iowa and settled land in Section 9, English Township. The 80 acres that he purchased of the government was afterward known as the Vickroy place. He built a log cabin 16 feet by 16 feet with a stone chimney. This farm he afterward sold and bought 160 acres in the same section.

At that time, there were but few houses on the road to Chariton. About this time, Geo. Cain built a frame house on his 80-acres farm in Section 16. This was afterwards known as the Geo. McGlothlin place and was sold to T.M. Dunshee in 1870.


Mr. and Mrs. Kinsey had eight children born to them, four boys and four girls, three of which are living, Sarah M., Elmer O., and Elizabeth V. 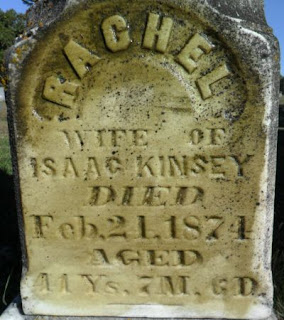 He was again married to Welthy Apgar March 2, 1876. Their present hom is located in Section 16 on a good piece of land where they have a comfortable home.

Isaac, Rachel, Welthy, Robert and William Kinsey share a tombstone in the Newbern Cemetery. The large photo here is by Doris Christensen and taken from the Find A Grave Web Site. The smaller photos are from the Iowa GenWeb gravestone photo database.
Posted by Frank D. Myers at 6:31 AM