Gay and lesbian voices from Iowa, or related to our state, almost always (until recently) been edited out or obscured. This is a modest attempt during National LGBT History Month to identify some of those men and women with Iowa links who have spoken through literature, media, the arts and other ways --- and nade a difference. 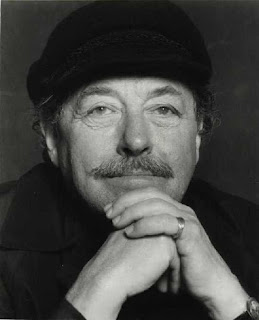 WILLIAMS, TENNESSEE (Thomas Lanier Williams III), the major 20th Century American playwright: Tom Williams spent less than a year in Iowa, just long enough to cap a somewhat confusing academic career with a Bachelor of Arts degree in English from the University of Iowa, but if the legends are to be believed, it was here in the Hawkeye state that he was informally rechristened "Tennessee."

Williams was born March 26, 1911, in Columbus, Mississippi, but moved with his family to St. Louis at the age of 8 after his father received a promotion. Before arriving in Iowa City at age 26 on Oct. 1, 1937, he had attended the University of Missouri at Columbia (1929-1931) and Washington University, St. Louis (1936-37). According to legend, Williams' new friends in Iowa recognized, because of his accent, that he was a native of the South --- but were vague on exactly which state. So they started calling him "Tennessee" because it was the first southern state that came to mind, and it stuck. "It's better than being called 'Mississippi,' " he later joked. In later writings, Williams also noted that it was in Iowa City that he first became reconciled to the fact that he was gay.

After earning his degree during 1938, Williams went on to write, among many other works, "The Glass Menagerie," Tony-award-winning "The Rose Tattoo," "Cat on a Hot Tin Roof," "Night of the Iguana" and Pulitzer Prize-winning "A Streetcar Named Desire." In 1980, he was honored with the Presidential Medal of Freedom by Jimmy Carter.

Williams' personal life deteriorated after the 1963 death from lung cancer of his great love, Frank Merlo, and he was plagued with depression and chronic drug abuse for the remainder of his life. He died at age 71 on Feb. 25, 1983, in a New York hotel after choking to death on the cap of a bottle of eye drops. He was buried near his mother in Calvary Cemetery, St. Louis.
Posted by Frank D. Myers at 8:42 PM