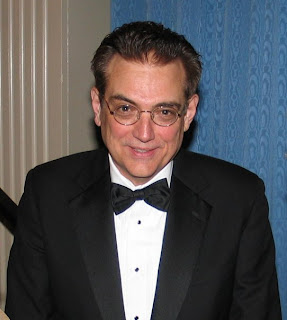 EYCHANER, RICH, entrepreneur and veteran LGBT activist. If a "top ten" list of LGBT Iowans who have made a difference for their community were compiled, veteran activist Rich Eychaner most likely would be near, or at, the top.
Born Nov. 15, 1948, in DeKalb, Illinois, Eychaner was one of four children --- two gay and two straight --- born to Howard and Mildred Eychaner, who became pioneers in the Illinois Parents & Friends of Lesbians and Gays (PFLAG) organization as well as LGBT advocates within the United Methodist Church and elsewhere. Their other gay son is Chicago entrepreneur and philanthropist Fred Eychaner.
Rich Eychaner came to Des Moines in 1975 to open an Allied Van Lines franchise --- intending a brief stay. He's still here. Now publicly engaged primarily in real estate, he at various times has owned a chain of video stores, been a major investor in the Iowa Cubs --- minor-league affiliate of the Chicago Cubs, and launched an alternative rock radio station.
Eychaner came out during 1978, and has been a tireless advocate since. He was the first openly gay Iowan to seek federal office, running in 1984 for the Republican (yes, Virginia, there once were gay Republicans in Iowa) nomination for 4th District U.S. represenative. In addition, he was founding chairman of the Gay Coalition of Iowa, co-founder of the first Iowa Caucus Project (advocating gay rights in presidential campaigns), served on the Iowa Civil Liberties Union board, as president of the Iowa Civil Rights Commission and on the board of the Des Moines Gay Men's Chorus and is co-founder of the Iowa Pride Network.
Thirty years of lobbying paid off for Eyhaner and other LGBT Iowans when, in 2007, then-Gov Chet Culver (a Democrat) signed into law a measure adding sexual orientation and gender identity to protected categories under the state's civil rights law. Separately, sexual orientation was added to anti-bullying legislation.
The principal outlet for Eychaner's philanthropy is the Eychaner Foudation, which encompasses the Mathew Shepard Scholarship program for Iowa LGBT high school seniors and the Howard and Mildred Eychaner Minority Scholarship program for seniors at DeKalb High School.
Posted by Frank D. Myers at 9:39 PM