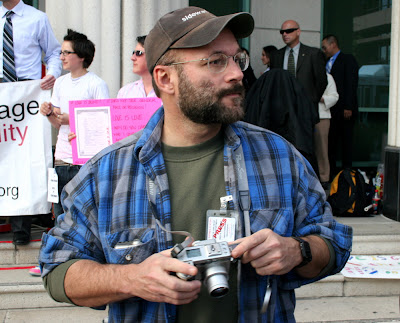 WOCKNER, REX, freelance journalist. Rex Wockner's principal tie to Iowa is the Bachelor of Arts degree in journalism that he earned during 1979 at Drake University. But he has covered virtually all major LGBT news since forming what he describes as a "one man wire service" for the gay press during 1988 --- including a few in Iowa.

Born during 1957 in Illinois, Wockner began his career as a radio reporter, but also wrote for the mainstream press. Beginning in 1988, he began to focus on gay issues and found a market for his work within the expanding gay media. He covered the first gay marriages, virtual and actual, in both Denmark (1981) and the Netherlands (2001), the first gay pride events in Moscw and Leningrad in 1991 and other international stories in addition to the broad sweep of LGBT-related stories in the United States.

By 1998, Wockner had 91 affiliates worldwide for his news feeds, earning him the designation "one-man gay AP." Wockner, who now lives in San Diego,  currently is on what he describes as an extended sabbatical, but continues to blog here.