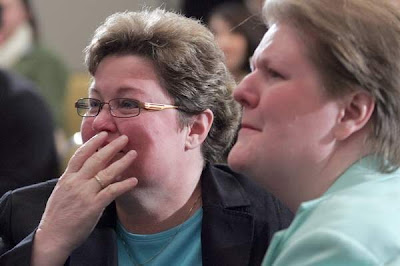 VARNUM, KATE AND TRISH, lead plaintiffs in Varnum v. Brien. Kate (right) and Trish (left) Varnum had been in a committed relationship for seven years, living ordinary lives for most of that time in Cedar Rapids, when the Iowa Supreme Court ruled unanimously on April 3, 2009, that a state ban on same-sex marriage violated the equal protection clause of Iowa's Constitution. Nothing has been quite the same since.

The case began during December of 2005 when the advocacy group Lambda Legal filed suit on behalf of six same-sex Iowa couples, including the Varnums, who had applied for marriage licenses in the office of Polk County Recorder Timothy Brien. In accordinace with Iowa law of that time, the applications were denied. The first victory in the case came on Aug. 30, 2007, when Polk County District Court Judge Robert Hanson ruled in the plaintiffs' favor. The unanimous 2009 Supreme Court ruling upheld Hanson's decision.

Although the issue of same-sex marriage in Iowa continues to be a divisive one, the Vanums --- married legally on Sept. 5, 2009 --- continue to live in Cedar Rapids where Trish, now 38, is an operations clerk for a Cedar Rapids manufacturing firm and Kate, 46, stay-at-home mom to their adopted son, Alex, now age 11 months. Since April of 2009, roughly 4,500 same-sex couples have married in Iowa.
Posted by Frank D. Myers at 6:40 PM