Gay and lesbian voices from Iowa, or related to our state, almost always (until recently) been edited out or obscured. This is a modest attempt during National LGBT History Month to identify some of those men and women with Iowa links who have spoken through literature, media, the arts and other ways --- and made a difference. 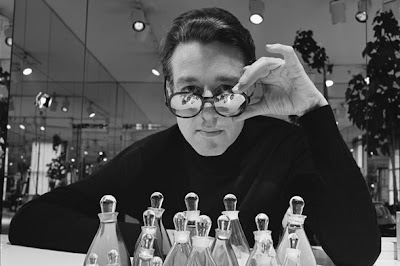 HALSTON (Roy Halston Frowick): Iconic fashion designer and party animal. "The '70s belonged to Halston," according the the inscription on his Fashion Walk of Fame seal in Manhattan, but this consummate practitioner of haute couture was born Roy Halston Frowick in Des Moines on April 23, 1932. His background was Norwegian-American (actually, I knew his first-cousin, Vera, many years ago). His parents moved to Evanston, Indiana, where he graduated from high school in 1950. After a semester at Indiana University, he moved to Chicago and enrolled in a night course at the Art Institute of Chicago, working as a window dresser during the day. He had developed an interest in sewing from his mother and began to design and create hats, opening his first shop in Chicago during 1957. Also in Chicago, he started using only his middle name as a signature. Later that year, he moved to New York. He leaped into the public and fashion eye after designing the pillbox hat that Jacqueline Kennedy wore to her husband's 1961 inaugural. His rise thereafter was meteoric.

Designer (and friend) to the stars --- Bianca Jagger, Liza Minnelli, Lauren Bacall, Elizabeth Taylor --- Newsweek designated him "the premier fashion designer of all America." He generally is credited with being the first American taken seriously in international fashion design circles. In addition to dressing the international jet set, he partied with them, too --- on a grand scale, often with his boyfriend, Colombia-born Victor Hugo (not that Victor Hugo) --- window dresser and Andy Warhol associate --- in tow. His parties were legendary, as were his perfectionism and his drug habits. He was the first to syndicate his name --- now a common practice, but at the time a disaster. His elite haute couture clintele frowned. Drugs combined with perfectionism and an inability to delegate eventually led to his dismissal by the conglomorate that syndicated his name and designs, and to the loss of Halson's right to design under his own name. Money was never a problem, however.

After retiring to California, Halston was diagnosed with AIDS during 1988 and succumbed to Kaposi's sarcoma on March 26, 1990, after an 18-month struggle at the age of 57. His ashes were scattered.
Posted by Frank D. Myers at 7:22 PM