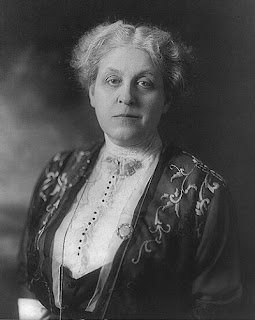 CATT, CARRIE (LANE) CHAPMAN. Towering leader in the woman suffrage movement. Iowa has not hesitated to honor Carrie Chapman Catt. Her name appears on many rolls of honor and lists of outstanding citizens. The Carrie Chapman Catt Center for Women and Politics at her alma mater, Iowa State University, as well as Carrie Chapman Catt Hall on the ISU campus honor her. The National Nineteenth Amendment Society maintains her childhood home near Charles City as an historic site. But any suggestion that she might have been a lesbian has for the most part been edited out of her story, as also has been the case with her mentor, Susan B. Anthony --- when told by heterosexuals. LGBT people universally and gladly claim both.

Catt was born Carrie Lane on Jan. 9, 1859, in Ripon, Wisconsin, but moved with her family to a farm near Charles City during 1866. A graduate of Charles City High School, she enrolled at the Iowa State Agricultural College (now ISU) during 1877 and graduated three years at the top of her class --- and the only woman in it. She then returned to north Iowa, taught school and in 1883 was named Mason City superintendent of schools, the first woman to hold that post. On Feb. 12, 1885, she married Leo Chapman, editor of The Mason City Republican, but he died a year later in San Francisco, where he had gone seeking new work. In California to deal with the aftermath of his death, she remained there for two years, supporting herself by selling advertising and writing on a free-lance basis.

In 1887, Carrie returned to Iowa to begin her crusade for woman suffrage through both the Women's Christian Temperance Union and the Iowa Woman Suffrage Association and, in June of 1890, married George W. Catt, a wealthy Iowa State classmate with whom she had become reacquainted in Calfornia. He encouraged her activism and supported it financially as they established a pattern of independent, although friendly and intertwined, lives.

In 1900, Catt succeeded Susan B. Anthony as president of the National American Woman Suffrage Association (NAWSA), but resigned in 1904 when George Catt became critically ill. He died in 1905. She continued her work as president of the International Woman Suffrage Alliance, of which she was a founder, but did not resume control of NAWSA until 1915. She then led it to success, represented by a fully ratified 19th Amendment on Aug. 26, 1920. She founded the League of Women Voters during 1919-20 as the successor to NAWSA. Remaining active in the women's movement, she also became an activist for peace during the 1920s and 1930s and was an early voice (1933) calling attention to the peril Jews were facing in Nazi Germany.

Catt died March 9, 1947, in New Rochelle, New York, and was buried with her longtime companion, Mary Garrett Hay (Aug. 20, 1857-Aug. 29, 1928) in Woodlawn Cemetery, Bronx, New York. The inscription on their joint tombstone reads, "Here lie two, united in friendship for thirty-eight years through constant service to a great cause." The two women had lived together from 1905 until Hay's death.
Posted by Frank D. Myers at 8:32 PM

Fascinating stuff. I'm embarrassed to add that it is brand new to me. Looking forward to reading all the posts.