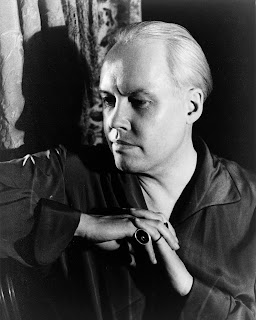 VAN VECHTEN, Carl: Writer, photographer, interpreter of the Harlam Renaissance. Carl Van Vechten, "twice married but famously gay" as the New York Review of Books puts it, certainly is one of the more complex characters Iowa has produced.

Born in Cedar Rapids on June 17, 1880, he left Iowa to attend the University of Chicago, then after launching a career as a newspaper writer moved on to New York in 1906, where much of his work initially was as a music critic. In 1907, he married a childhood friend --- a match that ended in divorce during 1912. Weeks after the divorce, he married Russian actress Fania Marinoff, a union that endured for nearly 50 years.

In the 1920s, Van Vechten launched a brief but prolific career as a novelist. His best-known work remains "Nigger Heaven," controversial for all sorts of reasons, including its title --- which is a reference to the balconies of churches to which black people generally were relegated by their white brethren. It was, however, a respectful work with fully-drawn black characters, rare at the time in books about black people written by whites.

Publication coincided with what generally is known as the Harlem Renaissance, of which Van Vechten became the foremost interpreter (for white people). Harlem actually always had been an interesting and lively place, largely ignored because its population was black. With the arrival in 1919 of Prohibition, however, white folks discovered how easy it was to get a drink there as well as its other attractions, including a substantial degree of sexual ambiguity. So the "renaissance" actually was more of a discovery, by white people, and Van Vechten's role in that was substantial --- and also slightly expolitive: He preferred black men.

Van Vechten continued to write and work at his photography until death in New York on Dec. 21, 1964, age 83. His ashes were scattered in the Shakespeare Garden of Central Park.
Posted by Frank D. Myers at 8:36 PM