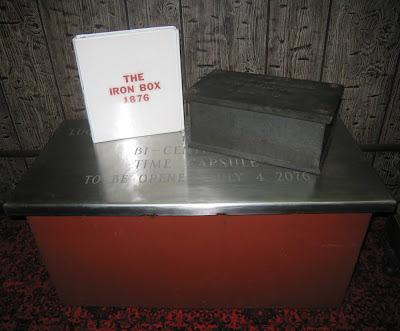 Here's the 1876 Centennial Box positioned on top of the 1976 Bicentennial Box in the museum library. The base of Bicentennial Box is not red, by the way, but stainless steel like the top. It's picking up a reflection from our florid carpet --- an artifact from the 1970s itself --- here.

One of this week's tasks at the museum has involved removing the legendary Centennial Box and its contents from a display case in the library and beginning the job of redeploying them in new ways. The box now is out in the open so that it can be examined and the contents will be placed in an archival binder box, accessible but not exposed constantly to light, dust and other elements.

Although the contents of the box are interesting, the story of the box itself --- detailed in an accompanying notebook --- probably is moreso. I remember its discovery in 1976, but wasn't living in Chariton at the time and after more than 30 years had forgotten many of the details.

Briefly, the box was cast and filled in 1876 --- when Chariton was preparing to celebrate the nation's centennial. Once the lid had been bolted onto the small cast iron box, the instructions were evident: "1876. TO.BE.OPEND.JULY.4'TH.1976." After that, however, the box bounced around for a time and then vanished --- and by 1976, when plans were being made for Chariton's bicentennial celebration, no one remembered that it existed. 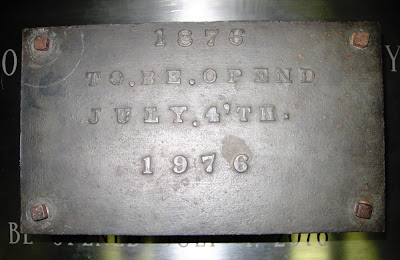 Early in 1976, Chariton attorney Paul Christoffers happened onto a brief reference to the box in a State Historical Society of Iowa publication. The author of the article, William J. "Steamboat Bill" Petersen, had happened onto an 1876 newspaper reference to the box and asked, would the people of Chariton be opening it on July 4, 1976? Well, probably not --- unless it could be found.

Christoffers took on the job of finding it. That involved initial trips to the the Historical Building in Des Moines to consult bound volumes of Chariton newspapers published in 1876 and that resulted in enough references to convince him that the box really was out there somewhere.

At that point the search began. Every corner of public buildings that seemed to be logical depositories --- the Lucas County Courthouse, Chariton City Hall, Chariton Free Public Library --- was scoured. No box. The Gibbon Building on the northeast corner of the square (mistakently believed in 1976 to be the oldest building on the square) was considered. Some thought it might have been incorporated into the cornerstone of a later building. No sign of that. Some thought it might have been buried. Even Chariton Cemetery records were searched. Not a trace.

Eventually, Christoffers and others decided to search the records of Chariton's Masonic lodge, since Masonic ceremonials generally were incorporated into the laying of cornerstones and might have been involved, too, in a ceremonial placement of the missing box.

Records from 1876 had just been located during a search of the vault of the Masonic Temple when someone asked, "Uhh, what might that box look like?" Shoe-box size, heavy, but manageable. And there it was, in the Masonic vault.

So Chariton was able to open its Centennial Box with considerable fanfare on July 4, 1976.

There were some disappointments. Affidavits inside the box showed that it had been opened at least twice previously, once in the 1920s and again in the 1930s, by curious public officials who justified their actions by the thought they wouldn't be around in 1976. Sure enough, they weren't.

The contents were rather sparse --- no gold coins or other items of great monetary value or historical importance --- other than stereoscopic cards containing the only known photographs of the July 4, 1876, celebration; a copy of the centennial program; and an issue of a contemporary newspaper. In addition, several photographs of Chariton residents (few identified) had been included as well as some 1876 business cards, an Indian-head penny and a few hand-written notes.

After the celebration, the box and its contents were brought to the museum for safekeeping and display. And then the story took another slight twist.

After the items had been carefully arranged in a vintage display case in the library, the case was locked --- and the key vanished. So there everything sat --- for at least 25 years. We were about ready to have the lock picked earlier this year, when Judy took the practical approach. Since the lock, like the case, was vintage, she began trying keys in various collections scattered around the museum. Finally, one worked. And the case opened.

The 1876 box now has been positioned atop the 1976 Bicentennial Box --- to be opened in 2076 --- which lives in one corner of the library. And it will be joined there fairly soon by its redeployed contents.

By the way, just in case anyone is overcome by curiosity before 2076 about what's inside the 1976 box, we have an inventory. There should be no need to open it between now and then.
Posted by Frank D. Myers at 6:45 AM

What a great story. Interesting that I was living in Chariton, at the time, but I recall nothing about the search for the box???