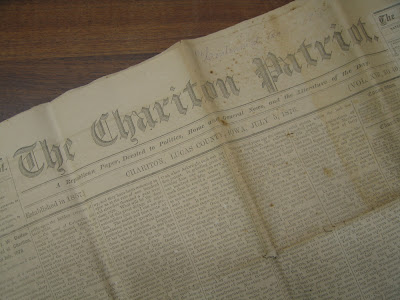 As it turns out, a big storm did do its best to derail Chariton's centennial July 4th celebration 136 years ago --- and while reading about it I got to thinking about our current 4th of July Committee, whose members spend countless --- often underappreciated --- volunteer hours organizing, raising funds to pay for and running what has been an annual event for as long as anyone can remember. And It's my guess that very few understand or appreciate just how much time and work is involved.

Heat was a major factor this year --- but thousands turned out and the big parade was one of the longest and best that I remember. So this post, for what it's worth, is dedicated to that hard-working group in remembrance of the hours its members spend working for our benefit --- and listening to weather forecasts and fussing about them as the big day nears.
+++

I've written earlier this week about Lucas County's Centennial Box and the documents it contained, including photographs that show very muddy streets on July 4, 1876. And I've complained about the lack of contemporary newspaper accounts of the event (none are available on microfilm). Then it occurred to me, duh, that the box had contained a folded copy of The Chariton Patriot of July 5, 1876, and that perhaps if I unfolded and read it something would be revealed. And there it was, on Page 3, a brief account of the celebration preceded by a paragraph reporting upon the storm that had preceded it.

Brief, because the newspaper staff had devoted most of its time and effort to setting into type the text of speeches delivered in conjunction with the event. These fill Page 1 and spill over onto inner pages. Lucas Countyans obviously had a much higher tolerance for lengthy oration than we do now.

The reporting began on Page 3 with a paragraph devoted to "The Big Storm." Keep in mind that the 4th fell on a Tuesday that year.

"A destructive wind and rain storm occurred Monday afternoon of this week. Fences and trees were blown down quite extensively and much damage of a more serious character done, among which we have heard of the following:

No wonder the streets seemed to be muddy in those rare 1876 photographs. The Liberty Pole, by the way, was the mighty flag pole on the west side of the courthouse visible in this photo --- so tall that the flag itself is outside the photo frame. At least later 4th of July Committees don't have Liberty Poles to contend with. 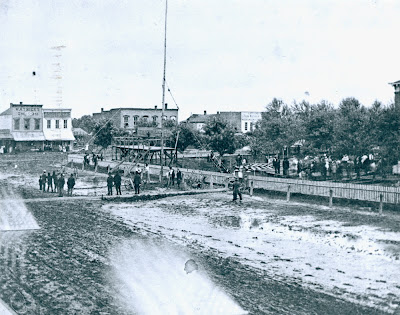 Here's the report of the July 4th celebration itself. Since the story was composed as one long paragraph, I've broken it up a little.

"The Fourth in Chariton: Pursuant to arrangements, the first Centennial 4th of July was duly celebrated in Chariton. The heavy rain and wind storm the evening before throughout the county caused the crowd to be much less than it otherwise would have been, but yet the gathering was creditably large, and the enthusiasm what might be expected on the hundredth birth-day of American Liberty.

"The day was cloudy but very pleasant and we do not hesitate to say that for a real genteel, orderly and enjoyable gathering it has never been equaled in Chariton. The crowd was estimated at 5,000 people, most of whom remained until after the evening's programme had been gone through with.

"We have not space to refer to the speeches and other performances except in a brief manner (the full text of some of those speeches are printed elsewhere in this issue of The Patriot). The welcoming address by Hon. Robert Coles, the speech on the military of our country, by Col. O.A. Bartholomew, the oration by Mr. Diefendorf and the speech by Judge Boyle, of Garden Grove, the latter of which was delivered at the Opera House in the evening, as well as the responses to toasts by Col. W.S. Dungan, Mr. F.C. Fearing, Hon. E.E. Edwards, Hon. S.D. Wheeler, and Mr. S. Stewart were all good and rang with genuine Centennial patriotism.

"In the afternoon the "Whang Doodle" parade came off. This consisted of about one hundred men and boys mounted and dressed in a variety of grotesque costumes, and who were led through the streets by a tin band furnishing music in keeping with the appearance of the procession and the whole affording much amusement for the multitude. The Russell and Chariton brass bands, and the Chariton Glee Club enlivened the day with rare music while the roaring of the cannon reminded the crowd that it was only through the thunder tones of this instrument of death that our liberties were spoken into existence.

"The procession was fine, embracing the Masons and Od Fellows of the county, two brass bands, and a large, beautifully decorated wagon containing 37 Misses representing the States of the Union and a young lady representing the Goddess of Liberty.

"In the evening a fine pyrotechnic display was made in the square after which the crowd dispersed universally feeling good that they had participated in the patriotic and extremely pleasant exercises of the day."
Posted by Frank D. Myers at 5:56 AM

I googled about what a whangdoodle parade might consist of and found a recounting of one in 1860. Fascinating!