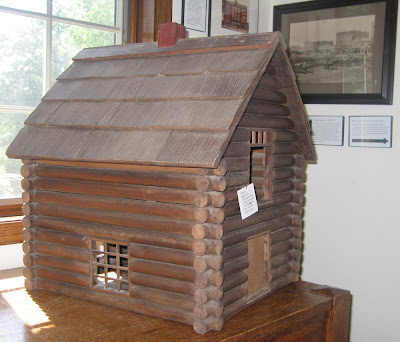 Although not to scale and not intended to be an exact representation, this model of Lucas County's first courthouse gives some idea of how it must have looked. The real building was constructed of hewn logs rather than rounded logs, and no attempt was made to add the exterior staircase to the second floor or its platform landing to the model --- now in the Lucas County Historical Society collection.

The symbolic nature of Lucas County's current 1894 courthouse came up a couple of times Tuesday during discussion of "branding" both Chariton and the new Chamber/Main Street organization. In other words, a photo or other representation of the courthouse clock tower "says" Chariton or Lucas County to those who see it --- words aren't necessary ---  if they already are familiar with the connection between the building and the communities. That makes it a good candidate for a branding symbol --- an image that speaks for itself.

That most likely wouldn't be the case with our first courthouse, a simple story-and-a-half log cabin built quickly during 1850 to serve the immediate needs of a pioneer community and in use for only about eight years.

It wasn't even built in the central courthouse square, but instead just south of what now is the alley on the east side. As originally platted, each side of the square had been divided into four large lots. The east side of the square was designated "Block 9" and the lot upon which the courthouse was built, "Lot 6." The courthouse location probably was selected because no one had stepped forward to purchase that lot in early bidding so the county still owned it. After 1858, when the county no longer needed the log building, Lot 6 was sold and subdivided into smaller lots since occupied by commercial buildings. The first courthouse actually was financed by revenue from the sale of other lots in Chariton since the county commissioners had no other source of income.

Dan Baker, who researched and wrote the local chapters of Lucas County's 1881 history, included a detailed account of the first courthouse on pages 407-409, based upon documents he found in a box in the attic of the second courthouse. Here is that account:

"Ordered, That the board receive through its clerk, at the next session thereof, sealed proposals for building a court-house in the town of Chariton, Lucas county, of the following dimensions, to-wit: said house to be constructed of good solid oak logs, hewed so as to face from eight to twelve inches; said house to be eighteen feet in width and twenty-two feet in length, and to be one story and a half high; the lower story to be eight and one half feet in the clear; the upper half story to be five feet to the top of the plates; said house to have good oak sleepers and joists sufficiently strong to make good solid floors; to be laid with good lumber, joined and laid down in a workmanlike manner. The roof of said house to be constructed of rafters of suitable size, and to be covered with joint shingles to be made of oak or walnut, laid five and one half inches to the weather; said shingles to be eight to ten inches in length. The spaces between the logs of said house to be pointed with lime and sand. Said house to have one door and shutter in the front part of the lower story, near the middle of said building; and also three twelve-light windows, one in each side and one in the back end of said house; also one door and shutter in the upper story of said house, in connction with a flight of stairs and platform to run up on the front end of first story of said building; and also one twelve-light window in each end of said house in the upper story; and also a partition to run through the center of the upper story, to be made of plank, with a door and shutter in the center of said partition; said platform in front of the upper door to be six feet square, with railing around it two and a half feet high. The gables of said house to be weather boarded up with suitable lumber; the doors of said house to be made of seasoned walnut lumber matched together, and hung on hinges, and suitable locks to be put on said outside doors; the windows in said house to be filled with suitable sash and glass, all of which is to be done in a workmanlike manner. Said house is to be located on lot number six in block number nine in said town. Said house to be completed on or before the first Monday in October, A.D. 1850. And it is further ordered, that the board of commissioners of said county pay for the building of said house out of the town lot fund."

At the following session of the board of commissioners, May 15, 1850, sealed bids were submitted, and that of Beverly Searcy (left) being the lowest and best, he was awarded the contract for building the first court house, in compliance with the foregoing specificaitons; for which he was to receive the sum of three hundred and seventy-four dollars. The work of construction progressed as rapidly as the materials and means at hand at this advanced frontier point admitted. In addition to the specifications already given, there was a plan of the building drawn in perspecive, by J.J. Jacobs, of Decatur county, giving a front view of this pioneer temple of justice. It, with many other scraps of early records, was found in the "abandoned archive" of the presesnt (1858) court house garret, where the dust and stains of more than thirty years have given it a somewhat ancient appearance. It is remembered by no one now living, who were active in the early organization of the county. It will be a greater curiosity to coming generation, than now, and should be preserved. The day approached for the completion of this important structure, and all eyes were eager to see its doors thrown open for public occupancy on the day named in the bond. But the materials and appliances for such a structure had mainly to be hewed from the forest --- all was primitive. There were no mills to cut the lumber; no railroads to transport it; not even wagon roads, except a trail to Albia, where the few pioneers of the county, who were here prior to the organizing election of August 6, 1849, had to go to cast their votes and pay their taxes; or to Brobst's Mill on the North Cedar, some thirty miles northeast, where they had to take their corn to be ground for their bread; and for wheat flour as a luxury, they would take turns, and one of their number would go over to Warsaw (Illinois), on the east bank of the Mississippi river, and get a load for such as sent, with a balance to sell to others, and thus pay the expenses of the trip.

Through the delays thus incident to pioneer life, Mr. Searcy, the contractor, asked for an extension of twenty days beyond his contract period in which to complete this edifice of justice, which time was granted. So that at the session of the board of cmmissioners of October 23, 1850, it was substantially finished, as required by the contract, and accepted by the board, as shown by the following action:

"Ordered, By the board of County Commissioners, that they receive the court house in the town of Chariton, of Beverly Searcy, by said Searcy knocking off fifteen dollars from the original price. The amount still due Beverly Searcy to be issued in twenty different orders."

Thus it will be seen that Lucas County was no longer homeless for her officials, and the holder of the scales of justice. Up to this time the various county officers had mainly carried their offices in their hats, as was done by some of the State officials at a very early day in its history.

Some time seems to have passed before the court house was furnished. As the order of the board of commissioners, made at the July, 1851, session, providing for the equipments of the court room, is of iself something of a curiosity, as well as the character of such equipments, we give it as it appears of record:

"Ordered, That the contract for job of furnishing benches and 'pulpit,' and bracing up the upper floor, be sold out at public auction, on Saturday next, the lowest bidder to be the undertaker; the undertaker to be paid out of the town fund as soon as the work is completed according to contract."