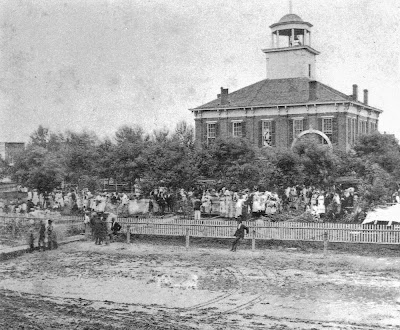 This view of the second courthouse dates from July 4, 1876, when Chariton was celebrating the nation's centennial. That accounts for the crowd. I believe this is the west side of the courthouse, but can't be sure of that..

Lucas County's second couthouse, an attractive foursquare Italianate brick building with central cupola, proved to be a major embarrassment on several fronts so not too much is known about it, including who designed it or how much it cost. Construction apparently began during the summer of 1858, but because its heavy brick walls were built atop a foundation of hewn logs (what were they thinking?), it lasted only 30 years before being condemned in 1891 as unsafe and torn down.

Major cracks had begun to appear a few years after it was built and there seem to have been periodic scares that it was going to just fall down, taking at least some of the county's elected officialdom with it --- although that did not happen. This also was the building from the second floor of which angry Charitonians launched Hiram Wilson through a window with a rope around his neck after he shot and killed Sheriff Gaylord Lyman.

One line of speculation holds that the inadequate foundation was a product of the incompetence of the county judge and the larcenous nature of the county treasurer, who some accused of having made off with a good deal of cash during the construction process although charges were not filed. The treasurer did manage to bankrupt the county, however.

Dan Baker provided the following sketchy but pithy account of this ill-fated building's origins on pages 447 and 448 of his 1881 history of Lucas County. The building still was in use at the time.

At a special election held in June, 1858, the question of a new court house, to be built in the public square, was submitted to the electors of the county, and the proposition prevailed, by a vote of 598 for it, to 71 against it. The construction of the building was under the administration of Ethan Gard, as county judge. There appear no record for proposals to do any of the work, or furnish any part of the materials. However, the writer found in the "abandoned archives," in the garret, the following proposal:

Chariton, May 3d, 1858.
To the County Judge of Lucas County, Iowa:
I propose building the court house of Lucas county for the sum of thirteen thousand and five hundred dollars.
George Switzer.

There is no record evidence that the above proposal, nor any other similar proposition, was accepted. The whole affair seems to be enigmatical to the "oldest inhabitant," and the people have been in ignorance, to the present day, as to the amount of money the building cost them. Tradition says that the contract for the construction of the building was a verbal one, and given by Judge Gard to the county treasurer --- W.T. Wade --- for $13,500, the amount of Mr. Switzer's bid as above shown. That there were no plans and specifications to which the mechanics worked; when they came upon the ground each morning they would apply to Judge Gard for instructions, and the Judge would direct them to lay brick, or to do some certain kind of work until "further orders."

The building stands in the middle of the public park, is sixty feet  square, two stories in height, built of brick, upon which is a belfry, supporting a bell, which tells the people that the scales of justice are poised, and those desiring to be heard will draw near. The ground floor contains four office rooms, and a wide hall through the building north and south. The upper story contains the court room, sheriff's office, and county superintendent's office.

It is a traditional opinion freely expressed, that this temple of justice cost nearer twenty thousand dollars than it did thirteen thousand five hundred dollars, because of the loose manner in which its construction was managed. It resulted in a heavy draft upon the tax-payers, in that early day of the county's financial strength, as it bankrupted the treasurer, and the treasury as well. Whether the large amount of money the building purports to have cost, beyond the contract figures, ever went into it, is a question which is ever likely to remain a mystery. The treasurer was found to be largely in arrears in his official accounting, for which his bondsmen have never responded to the county. This is the result of the loose and criminal manner in which the affairs of the people are too frequently managed. However, a judgment was obtained against the treasurer --- W.T. Wade, and his sureties --- Thomas Wade, Hezekiah Pollard and Jacob Taylor, for the full amount of his official bond --- $5,000. His successor was James B. Custer, who at once balanced the books of the office, and found Wade in arrears with the varous funds in his hands, to the amount of $8,553.48; thus leaving a balance of $3,553.48 uncovered by his official bond, and upon which no judgment could have been obtained against his bondsmen had they been responsible. Therefore, adding the sum of $8,553.48 to the sum of $13,500, supposed to have been appropriated for the construction of the courthouse, it would make $22,053.48, that went --- somewhere. 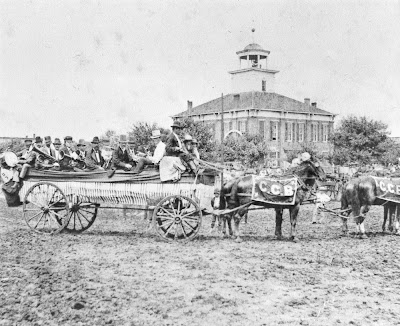 Here's another view of the courthouse, also dating from July 4, 1876, with the Chariton Cornet Band (CCB) in the foreground. I think the view here is of the southwest corner of the building.

According to other accounts, the new courthouse was first occupied during 1860, although still incomplete, and was condemned by a grand jury during 1891. The board of supervisors ordered that it be torn down during the autumn of that year. County offices were moved into the Dewey (or Branner) Block on the southeast corner of the square until the new courthouse was built.

A map of the square published in The Chariton Democrat of Oct. 3, 1889, contains a rough floorplan showing how the building was arranged then, two years before its condemnation. According to that map, the county treasurer occupied the northwest room on the first floor; the county audtor, the northeast room; the county clerk, the southwest room and the county recorder, the southeast room. A wide hallway ran north to south with vaults separating the offices on either side of it. On the second floor, the courtroom occupied all of the building's north front with the county superintendent of school's office in the southwest corner and the county sheriff's office in the southeast corner.

It was from one of the windows in that sheriff's office that the unfortunate Hiram Wilson was thrown by a lynch mob, with rope around his neck, during early July 1870 after having unwisely shot and killed Sheriff Gaylord Lyman.

Ethan Allen Gard, who arrived in Lucas County with his first wife, Priscilla (May) Gard, in 1853, was farming in Cedar Township when the 1856 special state census was taken, but was elected county judge during 1857 and perhaps because of that moved into Chariton. A native of Preble County, Ohio, he was 32 when elected and by some accounts an attorney, too, among useful credentials for a county judge. He was defeated for re-election, however, during October of 1859 when, presumably, the courthouse was nearing completion.

The fact that he stuck around Chariton for more than 10 years after the courthouse was completed suggests that his fellow citizens did not hold him personally liable for difficulties with the county treasury --- criminally at least.

By 1860, Priscilla apparently had died as Ethan was enumerated in the census of that year, working as a grocer with minimal assets, with their daughter, Mary M., born ca. 1856.

He married Catherine Boyd, widow of William --- another grocer --- in Chariton during September of 1867 and, when the 1870 census was taken, their household included his daughter, Mary M. Gard, and her three daughters, Mary, Cora and Chloe (twins) Boyd. Ethan's occupation was given as real estate agent, but he had no assets. She was, by comparison, relatively affluent, owning real estate valued at $6,500.

That marriage does not seem to have worked out, and by 1873 he and daughter Mary were living on a claim in Prairie Township, Jewell County, Kansas. He moved later to Oklahoma and died in Yukon, Canadian County, Oklahoma, at age 85 on June 15, 1910. According to the 1910 census, he still was "working out" as a laborer in his 85th year. Yukon now is part of the Oklahoma City metropolitan area.

Waitman Trippet Wade seems to have been the principal focus of Lucas Countyans' courthouse- and treasury-related ire, although Dan Baker attributed Wade's performance more to incompetence than larceny. "His method of business," Baker wrote in the 1881 history, "was shiftess and inexcusable and to it he was indebted for his downfall, and not to any criminal liability."

Wade and his first wife, Ruhama (Eakin) Wade, arrived in Lucas County from Virginia during 1853 and settled in Union Township. He was elected county surveyor in 1855 and recorder-treasurer in 1857, but driven from office in 1859.

Ruhama Wade reportedly died during February of 1857, when the youngest survivor among her 12 children was only three years old, and on June 27 of that year he married as his second wife the widow Nancy  (McNear) Connor. They were enumerated together in the 1860 census of Union Township, he with no assets and she, with real estate valued at $1,300.

Also during 1860, perhaps in search of a new financial start, Wade and friends headed for the gold fields of Colorado, but failed to strike it rich. When he returned, he discovered that Nancy had died on May 26, 1861. On June 7, 1862, he married for the third time --- in Appanoose County to Mary Robb and they had three children while living in Walnut Township, Appanoose County --- the youngest born during 1868 when Waitman was 55. He reportedly died in Appanoose County on Nov. 18, 1873, aged 60.
Posted by Frank D. Myers at 6:41 AM