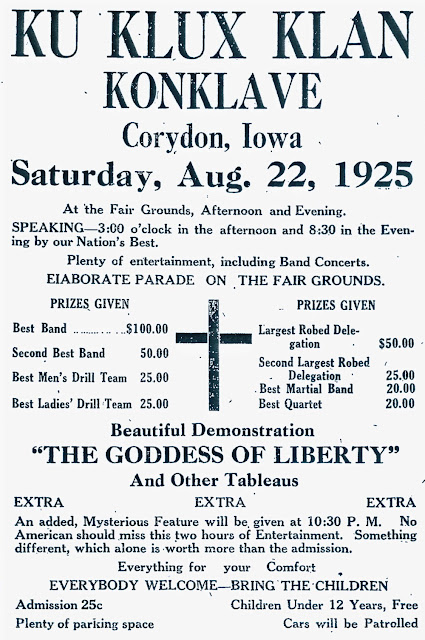 I could not find an advertisement for Chariton's 1924 Klan rally, but here's the advertisement that appeared in Chariton newspapers during August of 1925 to promote the next year's regional gathering --- in Corydon.

... we're gonna burn ourselves a cross tonight." Or something like that, even though the robes and pointy-topped hoods a good number of Lucas Countyans were wearing in the early 1920s weren't actually sheets, but professionally sewn regalia sold for a profit by recruiters.

One of the most peculiar twists of our history, although it's not talked about much, is that the biggest gathering in Chariton prior to RAGBRA's over-nighter a few years ago was a 1924 Ku Klux Klan rally. Yup. Pretty scary stuff.

Since we're nearing the 88th anniversary of that event I've been thinking about some of the forces at play then --- and now: old-time religion, old-time bigotry, extremist nationalism, populist scapegoating and fear. The parallels are kind of spooky.

I've told the story on several occasions of my great-aunt and great-uncle, who entertained their sheeted friends at a cross-burning party at their place down in the woods along Wolf Creek back in the 20s. Scanning through 1924 Herald-Patriots Friday, I came upon this little  item from July 3 that could refer to that event:

"A large open air meeting of the Ku Klux Klan was held Monday evening south of Chariton and was attended by men and women from all over the district. It was estimated that there were 2,500 men and women present. A national speaker was present and addressed the large gathering," the Herald-Patriot reported.

According to a publisher's note, the news item had appeared first in The Seymour Herald, suggesting (a) that the Chariton newspapers hadn't been aware of the meeting and (b) the gathering had involved quite a number of Wayne Countyans, too.
Now I'm doubting the figure 2,500 --- but obviously it was a big deal. And the obvious question is, what the hell was going on here, and why? This is Iowa, after all. Moderation in all things --- until Christianist loonies took over the Republican party in recent years. Not.

And it's not a topic much talked or written about. By 1930, the Klan was gone and Lucas Countyans who had been involved were either ashamed of themselves --- or had been shamed into silence, robes had been packed away or destroyed. "Aw shucks, it was just another lodge," those who talked about it at all said.
+++

To understand a little of what was going on here, you've got to go back to 1915 when D.W. Griffith's iconic but horrifying "The Birth of a Nation," was released, fictionalizing and glorifying the first Ku Klux Klan, a dreadful and deadly outfit organized during 1865 in Pulaski, Tennessee.

That Klan was long dead when Griffith's film opened, but "The Birth of a Nation" set off a nationwide revisionist Klan craze capitalized upon by William J. Simmons, who founded the new Klan that year in Stone Mountain, Georgia. Much of the new Klan's paraphernalia, from sheets to flaming crosses, was lifted straight from the movie. If it hadn't had such tragic consequences for blacks foremost but also for Jews and Roman Catholics and all those other "others," the whole business would have been hilarious.

The new Klan puttered along until 1920, when its future was placed in the hands of professional publicists --- seriously. It then exploded across South and North --- a marketing success story based upon racism, anti-Semitism, anti-Catholicism, anti-Communism, opposition to immigration and --- prohibition. The Klan's target audience was exclusively white and exclusively protestant. And Lucas County was about as white and protestant as it got.

Klan organizers spread across the land to recurit new members, collect dues and sell costumes, keeping half the money for themselves. Since nearly everyone belonged to one or more lodges in those days, the trappings of fraternal organizations were added, too. That gave rise to the line, "but it's just another lodge."

It's probably impossible now to determine who set off Klan excitement in Lucas County or exactly when. But we do know that a public promotional meeting for the Klan was held on the square during late April of 1923 because Henry W. Gittinger, then editor and publisher of The Chariton Leader, reported on it.

By that time, a professional Klan recruiter had moved to Chariton from Indiana --- the state where the new Klan was having its most success outside the South. And a preacher who went on to become something of a Klan chaplain had just been installed at First Christian Church.

Here's an edited-down version of Gittinger's May 1, 1923, report, which highlights some of themes and tactics used by Klan recruiters (it's estimated that perhaps two-thirds of public advocates for the new Klan were protestant preachers).

The following strange message broke out on the telephone poles all over Chariton early on last Thursday morning: "Principles of the Knights of the Ku Klux Klan exposed by Dr. James Franklin Sanders, eight and one-half years pastor of the Baptist church at Clinton, Iowa; nine years pastor at Keokuk, Iowa; six years financial secretary of Des Moines University. Thursday, April 26, commencing at 8:00 p.m. in the court house square, Chariton, Iowa. Free. The public is invited."

It was a cunningly ... worded hand bill. It would leave the impression that the meeting was for the purpose of attacking the aims of the "invisible empire" by the use of the word "exposed," and while it was perfect in grammar yet it was probably for the purpose of catching the crowd. Had the hand bill read, "The objects of the Klan will be defined by James Franklin Sanders" then everyone would have been aware of the intent of the meeting, but by the use of the word "expose" it was left in doubt. This was just a little cunning.

Well, as to the meeting. In the afternoon the portable band stand was hauled to the east side of the square for a speaker's stand and by the time Dr. James Franklin Sanders and his Major Domo appeared a big and eager crowd had gathered in front, with ears well poised and their bumps of curiosity splendidly inflated.

The doctor proved to be a good talker and charged his batteries with plenty of the galvanic fluid. His manner was pleasing and while at times his language was scathing at certain conditions, yet those opposed to his line of logic rather enjoyed it instead of taking offense, as he did trim down the rough edges, showing that he was a man of culture and consideration, even though one might not espouse his cause.

He made but little reference to the Ku Klux Klan. Maybe he realizes it is not a very fascinating title for what he terms a benevolent and useful order. He spoke once or twice of the "invisible empire," and often said, "we," meaning the order for which he was speaking. He said it stood for true Americanism and the individual who objected to that should take a canoe trip to the country from whence he came....

The first allegiance of a citizen of the United States should be to his government (Sanders said). The free schools should not become the pawn of any cult, creed or interest. The government alone should prescribe the education of its future citizens, and the parochial schools should be prohibited unless there was government supervision.

A person of the Jewish faith was not eligible to membership because this was an organization based upon the belief in Christianity, and, even though a Jew might be just as patroitic as anybody and equally charitable it would embarrass him to deny his fath for the sake of membership. He would not do that. This was not a thrust at citizens of that faith (according to Sanders), because a person of the gentile faith does not feel aggrieved over the fact that he is ineligible to belong to Jewish associations. And the same thing might be said as to membership in the order of Knights of Colubus.

However, the speaker was somewhat forceful when he referred to the Lutheran and Catholic parochial school establishements in their dealing with primary education.

The speaker had a kindly feeling for the American negro, and it was not through any feeling of antagonism that the bars had been put up against that race (according to Sanders). But the Klan did not believe in negro rule. This is a white man's country in the same sense that it is a free country (Sanders said), and it should be kept free through the rule of men and women who had the right conception of freedom; and in like manner the superior race should govern --- not the inferior. But this did not preclude the rights of the black race, or any other people who had gained a foothold here.

The Klan believed in the putting up of the bars against rifraff humanity of the world (according to Sanders) and not letting them come here at the behest and for the purpose of increasing the fortunes of certain selfish interests who care nothing for them or for American society, just so they can wring dollars out of the transaction. This promiscuous immigration would have the effect not of improving their condition under the environment in which their exploiters would place them, but would degrade our present standards of citizenship, and if perpetuated would destroy the fabric entirely....

The industrial lord who reckoned dollars to citizenship and would demand an inferior man to supplant a superior was a national menace and should go across to the kind he covets and not bring them here.

The speaker strongly censured the American press (not the rural press) for truckling to alien interests and those not tending to the betterment of social and governmental conditions, its subserviency to wealth and of the news sources being under the control of selfish and sordid interests....

And the profesisional politician came in for his share. Too many of them were appealing to the mob spirit --- to the rabble vote, and not asking the support of ideals, or giving it....

And so this organization (the Klan) was for the purpose of assisting in the honest enforcement of law, bolstering up honest and well intentioned officials, and serving notice on others that they must do their duty or get out of the way..... It was no more nor no less than what had been in vogue all over the country before, known as the vigilante committee, but better organized with a broader scope....

The Klan gained strength in Lucas County and across Iowa during 1923, but 1924 and 1925 were peak years. In Chariton during 1924, the Klan would purchase the vacant United Presbyterian church building as a meeting place and prepare to host a giant regional rally. More about that another time.
Posted by Frank D. Myers at 6:48 AM