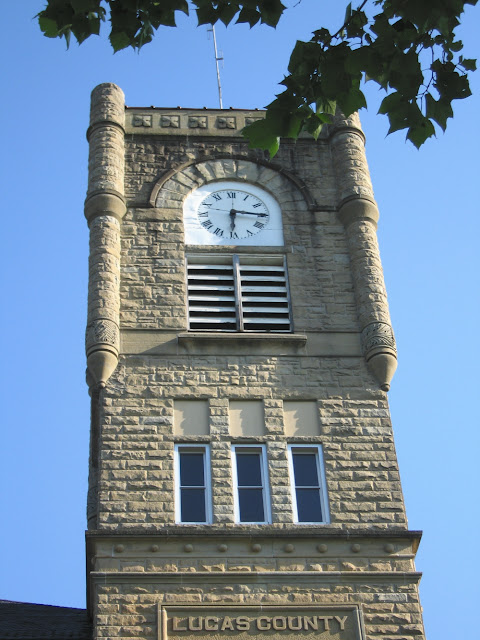 Some questions were asked Saturday about the origin of the courthouse clock which, although not functioning at the moment, has presided over Chariton's square for nearly 120 years --- since it was set into motion by its donor, Smith H. Mallory, at 10 a.m. on May 22, 1894, the day the courthouse was dedicated.

There is no doubt that Mallory offered a clock to meet architectural specifications for the building's tower on Jan. 1, 1894, about two months after construction of the building had begun during late October of 1893. Or that it was manufactured by the Seth Thomas Clock Co., then located in Thomaston (earlier Plymouth Hollow), Connecticut.

Whether it came to Chariton directly from the factory or whether it had first been used, as legend sometimes has it, first in a building on the grounds of the World's Columbian Exposition of 1893 (Chicago World's Fair) is another matter. Mallory had devoted nearly two years of his life to the Columbian Exposition, serving on the Iowa Commission and supervising design, construction and operation of the Exposition's Iowa Building. So he certainly was associated with the Exposition at the time need for a courhouse clock arose.

Whatever the case, here's the text of the speech Mallory delivered --- as presiding officer of dedication ceremonies for the new courthouse in Chariton on May 22, 1894, as published in a special dedication issue of The Chariton Patriot bearing that date. His historical references for the most part derive from Dan Baker's 1881 history of Lucas County and therefore contain a few errors. The final paragraph of the text deals with presentaiton of the clock.

Ladies and Gentlemen: To say that I feel highly honored and much gratified in being chosen by the committee of ceremonies presiding officer of the day, is the least that I can say. A day that will make part of the history of Lucas county; a day that a record will be made of the sayings of the ablest and brightest minds of the county at this time; a day that will take us back, in memory, to the organization of the county 45 years ago the coming 4th of July, and the story told of the progress made in that time, and prophesies of what the coming half century will bring forth.

We have met today to celebrate the completion of our beautiful new court house, to dedicate it, to have an old fashioned house warming and a good time generally, and in order that we may more full appreciate and realiize the blessings we enjoy at this time, I want to take you back to the day of the first settler. I will not take the time to tell of the hardships and trials of the early settler, and many obstacles he had to overcome, but ask you to think of the great advantages and improvements we enjoy at the present time.

A half century ago the Indian roamed these beautiful prairies, hunted and fished along the banks of the Chariton, Whitebreast and Cedar and made his home here. This spot was then covered with the prairie flowers. By treaty ratified March 23, 1843, the red man gave up the territory east of the Missouri river, and agreed to move west thereof within three years. He was quickly followed by the white man. In the autumn of 1846 at the time of the exodus of the Mormons from Nauvoo, six families located at Chariton Point about two miles southeast from here and built log cabins, planted a crop the following season and moved on west in the fall, joining their people at Kanesville, now Countil Bluffs. These were the first known white settler n Lucas county.

This same year, however, the first permanent settlement was made by Wm. McDermitt, his wife and four children locating on the east border of the county, in Cedar township, calling his settlement Ireland. In the spring of 1848 other settlers came, the first Elijah Baldwin, then the Waynick brothers, Wyatt, Iverson and Doctor Bill, also James Roland. Lucas county was cut off from the western part of the county of Kishkekosh (now Monroe) and was organized July 4, 1849. Three commissioners, Wareham G. Clark, Pardon M. Dodge and Richard Fisher, were appointed to locate the county seat; they met in August and after examining the various locations recommended by interested parties --- selected this spot as the most desirable, and time vindicates their judgment.

The 160 acre tract upon which the county seat was located was entered by James G. Robinson and sold to the county for $200. The commissioners made their report to the county commissioners on the 11th of September, naming the prospective town "Polk" in honor of the then recently retired president. Some citizens objecting, a meeting was called and the name of Chariton finally agreed upon. Previous to this time, upon August 6th, the first county election was held at Ireland precinct; twenty-five votes were cast and fourteen officers elected, among them three county commissioners who organized thier board on August 10th ready for business. At their session on August 8th, 1850, they decided to build a court house, and advertised for sealed proposals. May 15th the contract was awarded to Beverly Searcy for $374, he being the best and lowest bidder. October 23rd the building was accepted, knocking off $15 for not coming up to the specifications. The log court house answered the purpose until 1858 when the increased population demanded more commodious quarters. A special elected was held in June of that year, five hundred and ninety-eight votes were cast for and 71 against a new court house. The late brick building was erected, costing somewhere between $13,000 and $20,800, and after a service of over 30 years was declared unsafe and the stone edifice are are today dedicating was erected upon the same site.

We will now go back in memory to the little muddy village as we first saw it in 1856, destitute of sidewalks, to the old school house with uncomfortable seats, to the modest primitive church building dimly lighted with kerosene lamps, to the shades of the cottonwood trees, and the days of the western stage coach. While those days have many pleasant memories, yet in recalling them we are apt to wonder how we could have lived, deprived of the many advantages and conveniences which we have since obtained. Many of the comforts and necessities of life, which we now enjoy, were then unknown save as luxuries; but Chariton was a village of great expectations, its earliest inhabitants seemed to have looked forward to the time when it would become a city. It seems to have been a precocious child, it struggled to keep apace with the many growning towns of the state.

It passed safely through the necessary preliminary work required in obtaining public improvements. During the fifies it eagerly watched the snail-like movements westward of the old B. & M. R. R. from Burlington. A small boy with a cracked bell frequently announced the railroad meetings at the old court house; rousing resolutions in favor of a railroad were adopted by a large majority; numerous committees were appointed to confer with diverse railroad magnates; there was the large committee and the small committee, the long committee and the short committee; the old committee and the new committee, all working in harmony to secure a railroad. After awhile the railroad came, then the branches north and south, the telegraph came, the telephone came, the electric plant came, the old stage coach gave way to the whistle of the engine, the telegraph crowded out the pony express, the telephone took the place of the small boy, kerosene and tallow vanished in the blaze of electric lights. Hand in hand with the grand march of events came the beautiful schoolhouse, the commodious and comfortable church, substantial and elegant homes, concrete and stone sidewalks, and the little muddy village of great expectations threw off the primitive apparel and stepped forth clad in the robes of a beautiful young city!

But do not drop a tear, the barbed wire fence hs gone, it went out scratch and for life, it gave way to the decorated picket, and thanks to the ladies of Chariton, the picket fence is fast disappearing; it will soon give way to the beautiful and sensible no fence at all. But my friends the latest arrival, the latest result of the energy of the people of Lucas county, is seen in this beautiful and substantial structure of which every citizen of the county may entertain a just pride.

Such buildings do not come every few years, they live when the people who made them have passed away; our children and children's children will view this building as a memento of our energy and public spirit. In view of this fact we may without egotism take pride in the fact that we have each contributed something towards the building of this magnificent house. but we cannot stop yet, there is more to be done, the continued good health of our city requires sewerage and water works, pure fresh water; and then our principal streets, especially around this beautiful square, should be paved. Good roads is the popular cry and we must not be behind the times; no better investment can be made that will add more to our comfort, health a prosperity, than waterworks and paving.

In conclusion I take great pleasure in delivering and giving possession to Lucas county, through her honorable board of supervisors, in pursuiance of my offer to them January 1st, last, the town clock that completes the tower of this palace of justice in accordance with the plans and specifications of the architect. This engraved plate is the conveyance. The clock was constructed by the Seth Thomas Clock Company, and guaranteed for five years. It has been tested for two months past and its operation has proved satisfactory to the experts who have had it in charge. At 10 o'clock this morning I set the pendulum in motion, and pronouncing the clock in perfect running order I turn it over to you, trusting that it will truly beat the time, and strike the hours to notify us when to begin our daily labors, call us from labor to refreshment, keep us company during the vigils of the night, and be like Tennyson's brook, "Man may come and man may go, but I go on forever."
Posted by Frank D. Myers at 5:57 AM

This detailed writing is a treasure, for sure, as are the clocks in the clocktower and the building itself. Thanks, Frank. ~ Mary