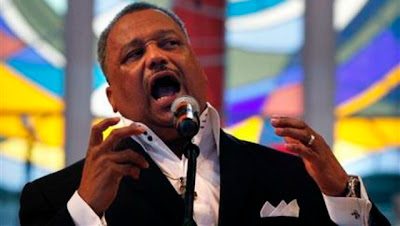 John S. and I have had a long-running (and good-humored) dispute about appropriate use of the word "irony," which causes me to stay away from it as a rule: I might slip up, ya know, and be left wide open to a semantic skewering.

But what else would you call the Southern Baptist Convention's move on Tuesday to elect its first black president (the Rev. Fred Luter Jr.), followed up on Wednesday by overwhelming approval of a resolution declaring that LGBT people lack the "distinguishing features of classes entitled to special protections?"

Southern Baptists, you may recall, are among the good Christians who brought us slavery, enthusiastically thumping the Bible's many affirmations of that institution, and then Jim Crow. The denomination apologized for all of that in 1995. Jesus loves black folks, too, many Southern Baptists now acknowledge.

Wednesday's resolution was phrased in terms of denominational opposition to marriage equality: "We deny that the effort to legalize 'same-sex marriage' qualifies as a civil rights issue since homosexuality does not qualify as a class meriting special protections, like race and gender."

It's kind of fun to remember that if the Rev. Mr. Luter's forbears were in fact slaves back in the good old days of plantations, hoop skirts and forced labor, they would not have been allowed to marry. Nor would Luter have been allowed to marry without criminal penalty someone of another race in the South until 1967, when the U.S. Supreme Court in Loving v. Virginia threw out as unconstitutional all anti-miscegenation laws.

At least 41 states, even territorial Iowa, had such legislation in place at one time or another; 16 states still did in 1967 --- a majority in the South. Onward Christian soldiers!

Frankly, I can't decide if it's ironic or not that one of the nation's largest and most active Unitarian Universalist congregation, All Souls Unitarian, is located in Tulsa --- Oklahoma. Oklahoma?

But having once dwelt among UUs and feeling the need for a long, cool drink of sensible water some days, I check the All Souls' sermon offerings now and then. Here is senior minister, the Rev. Marlin Lavanhar's, take on marriage equality in a sermon delivered May 20. Preach it, brother!