All the men and women merely players 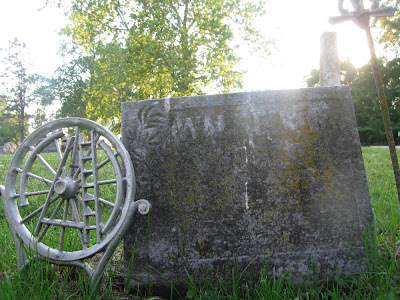 If "all the world's a stage," as Shakespeare proposes, the curtain fell too slowly on Warren Weston Noble --- incapacitated for 10 years by a stroke suffered in his late 50s after a career that had lasted more than 30 years.

In part because of that slow decline, I think, there has been no curtain call --- no one remembers. Lichen shrouds his modest tombstone in the Chariton Cemetery, making its inscription --- "Warren W. Noble, Jan. 26, 1856 - Apr. 9, 1923" --- impossible to read and his grave difficult to find.

Born near the square in Chariton during 1856, he learned and practiced the printer's trade in the offices of The Leader and The Patriot. Star-crossed in human love, perhaps? Who knows? The theater became sufficient.

"As a youth, when the shows came to town, he always hung about the old opera house," Henry Gittinger, then editor of The Chariton Leader, reported during July of 1918 after visting Noble, then 62 and confined to his room at the "old Noble homestead."

Then, according to Gittinger, "his chance came and he engaged for the season, traveling extensively with other companies until he organized one of his own and Warren Noble became known in all parts of the country," traveling "with his special car and his dramatic company, entertaining thousands of people."

The reports in Chariton newspapers commence with a brief item in The Patriot of Dec. 5, 1877, when Warren was 21 and "traveling with the Breyer theatrical troupe, now playing Ohio."

During July of 1879, after "traveling with the Western Theater Co. during the past year," Warren "returned home to spend a few weeks vacation."

To track his career farther, it would be necessary to wade item by item through more than 30 years of newspapers and there's no time for that right now.

But by 1918, only memories and memorabilia remained. "Upon the walls of his room are numerous photographs and pictures of those with whom he has been associated in the past, some having passed beyond the tragedies of this life,"Gittinger reported.

When Warren died five years later, his old friend fell back upon theatrical allusions to report his death on the front page of The Leader of April 10, 1923, under the headline "Well Known Comedian Is Off the Stage" and the subhead, "The Curtain of Life Closes on Warren W. Noble at His Home in Chariton Yesterday."

So far as I know, none of the memorabilia survived --- unless it's tucked away in a trunk somewhere. But here's the obituary:

And in this brief paragraph is the beginning and ending of a mortal scene, and as the day closed and the somber shadows formed into the curtains of night, so this life passed out at 8:00 o'clock.

He was the oldest son of Appleton R. and Maria Noble, pioneer residents of Lucas County, who long since passed from this pilgrimage, leaving their memories strongly engraven in the affaction of those who survived. At the time of Warren's birth, the family home was in a residence near where the Smyth block is now, and his boyhood was spent in his native village.

There were six children of the family, two sisters dying in infancy. The three surviving brothers are George, of Chicago, and Chas. E. and Clinton, of this city.

He was never married. He was of a positive character and brilliant mind and his nature was one of generosity and much could be said of this and will remain as an encomium. As a companiable gentleman he was most cordial and interesting, and hospitable almost to his own slight and had the advantages of culture and travel. And thus he is remembered in the vigor of his active manhood.

As a youth he learned the printer's trade in The Leader office when it was conducted by the late D.M. Baker, but as he had a trenchant for the drama he afterwards took up acting and was a master of the stage, and became the genius of the Warren W. Noble Dramatic Co., and his troupes appeared in all the important cities in the United States, but as he had a most sympathetic nature he often returned to his native town and his tenderness in parental regard and family ties was truly commendable.

He never neglected a friend. Year after year he traveled far and near and the name of Warren Noble was everywhere, it being one of his policies never to turn anyone away from his doors on account of not having the money to enter, and thousands of school children from coast to coast received his favors and were his friends. He got more satisfaction out of this than in any other part of his work. His benovelence was superb.

And so often he came back to the old home, and then away again.

But one day ten years ago he returned --- to remain. He was stricken with paralysis and from that time 'til yesterday when he took his final departure, he was slowly dying shut up in his room.

Weak in body and less vigorous in mind he endured it heroically to the end, often playing over the past and conversing with his friends as they called. In his circumscribed stage, tho he never left his narrow room --- and received new joys, only to again lapse into melancholy at the fate which had befallen him.

But the last scene has closed --- and the curtain has fallen. It was pathetic.

The funeral will be held at his late home Wednesday afternoon at 2 o'clock conducted by the Rev. Frank Bean.