A brief history of Chariton 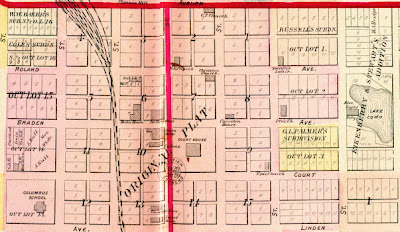 The assignment, which I've been procrastinating about, was to come up with a brief history of Chariton. Corey applied the cattle prod yesterday, and I got to work. Here's the result. Brevity is in eye of the beholder, but it's not especially brief. Nor am I certain that James G. Robinson's recollection of a whiskey jug circulating among the founding fathers will survive on a dignified public Web site. But at least it's a start. The plat above dates from 1896.

When James G. Robinson arrived to assist in Chariton’s birth on Monday, Sept. 10, 1849, he found five men and a boy seated around a deck of cards and an empty whiskey jug in tall grass at what now is the southwest corner of the square. Another boy was on a horse pointed toward Buck Townsend’s cabin, ready to ride for more whiskey.

Three of the men were commissioners appointed by the Iowa Legislature to locate Lucas County’s seat --- Wareham G. Clark of Monroe County, Pardon M. Dodge of Appanoose County and Richard Fisher of Wapello County. They had roamed the countryside for several days and, well before Robinson arrived that day, decided on the spot --- 160 acres surrounding a survey stake that marked the intersection of Sections 19, 20, 29 and 30 of what now is Lincoln Township.

The next day, Sept. 11, the locating commissioners reported their choice to the full county commission and it was official. The locators, staunch Democrats, wanted to call the new city Polk; Greencastle was suggested as an alternative.

Finally, Wareham Clark’s son, John, voiced the idea of others --- that it just be called Chariton, after Chariton Point --- a mile south and long a landmark along the native and pioneer trail that followed a high ridge across south central Iowa dividing the Des Moines-Mississippi and Chariton-Missouri river drainages.

The point was formed, and still is, by the bend at the most northerly spot along the Chariton River where its flow then shifted more abruptly than now from northeasterly to southeasterly.

Four years earlier, during October of 1845, Lucas County had opened to Euro-American settlers upon expiration of Sauk and Meskwaki rights to it. Permanent settlers did not arrive until 1847, however.

But during the late spring and summer of 1846, the ox-drawn wagons of Mormon pioneers had begun to pass through the future town site by the hundreds after Brigham Young directed those following him to Utah to abandon a more southerly route through Wayne County and follow what now is called the Mormon Trace.

Elder Freeman Nickerson’s family party, forced by weather, worn out equipment and exhausted livestock to find refuge along the point’s heavily wooded eastern flank during the winter of 1846-47, became its first long-term residents; Nickerson himself, the first known non-native to die here.

The point continued to be a stopping place for Mormons during the next two years, a place to rest before driving on to Garden Grove or Mount Pisgah. William S. “Buck” Townsend, adventurer and pioneer entrepreneur, and his family were the point’s first permanent settlers, arriving perhaps during 1848 and buying a Mormon pre-emption land claim. The Trace remained the most popular route across southern Iowa for pioneers, California-bound ’49ers and others through the 1850s.

The first challenge Lucas County faced, once the town site was selected, was figuring out how to purchase it. The land was not yet officially on the market and the commissioners had no money.

The county solved the first problem by making a pre-emption claim to the site. The money issue was resolved by Robinson, who purchased a military land warrant that entitled the bearer to claim 160 acres. Two years later, Robinson used the warrant to obtained title to the town site in his own name and transferred it to the county.

Chariton was platted soon after it was located and the first lots, mostly around the square, sold on Nov. 5, 1849. Almost immediately, Nelson Wescott built the first store --- a cabin at the intersection of what now are Braden Avenue and North Main Street. The original plat was resurveyed and corrected during 1851.

Chariton’s first boom began in the spring of 1853 when the U.S. Land Office was moved west from Fairfield. Until 1858, when the office was moved from Chariton to Des Moines, all who purchased public land in southern Iowa did so here and new settlers, land speculators and all who served them, previously a trickle, became a flood.

The city was incorporated after an authorizing election on Feb. 26, 1857, and Daniel Iseminger was elected the first mayor. He would die in combat during the Civil War Battle of Shiloh during April of 1862, five years later.

Although Chariton prospered during the 1850s, transportation options were limited. Construction of the Burlington and Missouri River rail route across southern Iowa commenced in the 1850s, but that project stalled at Ottumwa until the Civil War ended. Until July 4, 1867, when the first trains rolled into town, all supplies were hauled overland to Chariton by horse- or ox-powered wagon and stage coaches were the only form of public transportation.

Once the trains arrived, Chariton boomed again. Gradually, beginning in the 1860s, the crude frame buildings that had lined the square were replaced by brick.

By 1900, Lucas County was considered one of Iowa’s richest counties, based almost entirely on its agricultural resources, and Chariton, one of the state’s most prosperous cities.

Agriculture was supplemented by coal, beginning in the 1880s. The mining industry was launched in western Lucas County, near Lucas, then developed and prospered in the immediate Chariton vicinity and northeastward into English and Pleasant townships. Coal remained a major industry into the 1930s.

Although scattered small industries developed --- manufacturers of farm implements, wagons, carriages, brooms and more --- Chariton remained almost entirely dependent upon agriculture and coal until the development of such industries as Johnson Machine Works during the early 20th century and Hy-Vee Food Stores at mid-century.

Agriculture remains vital to the Chariton economy and those rolling hills, woodlands and rich prairies that surround the city and attracted settlers in the first place, offer through parks, trail systems and greenbelts a major recreational asset.
Posted by Frank D. Myers at 6:43 AM