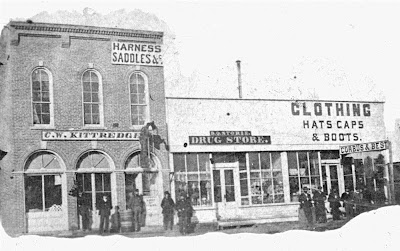 This is a photo, generally dated 1869, some 16 years after Joseph Braden arrived, of buildings that stood (and in one case still may stand) immediately south of the alley on the west side of Chariton's square. Both buidings were brand new, having been built after an 1867 fire that destroyed everything south of the alley. The one-story double-front building was occupied by D.Q. Storie's drug store (he moved his business not long thereafter to the north half of this block) and by the Corbus & Best clothing, hat, cap and boot store. The brick building had been built by Thomas A. Matson, who operated his harness and saddle shop upstairs. The first floor was leased by Col. Charles W. Kittredge, late of the 36th Iowa Volunteer Infantry, who came to Chariton from Ottumwa immediately after the Civil War and engaged in a variety of businesses, including general merchandise, before moving on to Colorado. The first floor then was taken over by First National Bank, which remained there until moving during the early 1880s to the new Union Block. The Richardson Romanesque Ensley-Crocker building now stands on the site of the frame building. The Stanton Building, with a slightly later Richardson Romanesque stone facade, occupies the brick building site and quite possible incorporates the original brick building into itself.

Joseph Braden was among the earliest of those Chariton pioneers who made Lucas County their permanent home rather than just passing through. He arrived in 1853, less than four years after the brand new town had been located, named and platted.

This is the first half of an account of Chariton's earliest days written by Braden and published in The Chariton Herald on March 27, 1902, four years before his death at age 75 during 1906. The second half will follow in a day or two.

Braden was born in London during 1831 and came to the United States in 1851, alighting at Dubuque. He came to Chariton at age 22, during 1853,  to work in the U.S. Land Office, recently moved west from Fairfield. He remained with the land office, eventually as registrar, until it was moved to Des Moines in 1858. After that he engaged in business and held a variety of public offices, becoming one of Chariton's most widely known citizens.

Joseph married Emily Waterhouse, also a native of London, during 1854 in Dubuque and brought her to the rough-and-tumble new town. Although the Bradens would have no children of their own, they brought his niece, also named Emily Braden, from London and raised her as their own in Chariton.

The readers of the Herald are well acquainted with Joseph Braden, as he has lived in Chariton since 1853, when he came here to take charge of the government land office and deal out at $1.25 per acre the same farms that are now bringing from $80 to $125 per acre. Mr. Braden has been an interested witness of and an active participant in the history of Chariton and Lucas county since that date. There were 200 people in this city then, with not many more in the county, which will make the following letter from the pen of Mr. Braden all the more interesting and readable to the present 5,000 citizens of Chariton and the 17,000 citizens of Lucas County:


It is about 49 years since I located in Lucas county. In that period of time I have forgotten many things that it would have been well for me to remember, and I have remembered some things it would have been well to have forgotten; but there is one thing I always remember, and shall always remember with great pleasure, that is, that from the day I arrived in Chariton, a stranger amongst strangers, to the present day, I have received naught but kindness from the citizens of Lucas county, and those, though strangers, of the early days remained but strangers for a few days, then became friends. I found it far easier to get acquainted in the west than in the east; there was more freedom, more open-heartedness, so that I was very soon at home in Lucas county, and have been at home ever since.

Locating here in Chariton, and having always resided here, my memory naturally turns first to the town. In January, 1853, there was but few houses in the, then, village, only one hotel, a one and a half story frame, or rather a one story with low garret which served as a bed chamber and contained six beds, just room enough to pass between each bed. There was no dearth of patrons. Hotels did not receive their main support from commercial travelers those days; had they done so, they would soon have closed for want of guests. These beds were usually occupied by two. The hotel was run by Henry Allen. In the winter of 1852 and 1853 he represented the county in the legislature, which then met at Iowa City, the capital. During his absence, the management was in the hands of his estimable wife, assisted by Lowry Boyle as clerk. This building was on the southeast corner of the square, and has only recently been removed to make room for the elegant brick building erected by Mr. Ed Lewis. In the removal of this building the oldest land mark of Chariton was destroyed.

In the spring of that year a small building on the corner of Grand street and Armory avenue was used as a hotel. In the fall of the same year a large two story frame was erected by Mr. Culbertson (uncle of the ex-county treasurer) on the south side of the square and took its place as the leading hotel. I say a large two story building because to us then it was large, and many prognosticated that it was too large for the town. Its builders and architects were Newland & Calhoun, and it still stands on its original location, though no longer used for hotel purposes. It was opened with several bands led by our fiddler and was soon full to overflowing, beds having to be made on the floor. In 1854 and 1855 the whole town was crowded, sometimes two and three families occupying the old log courthouse at the same time, until better quarters could be built. There are but few buildings standing today built prior to 1854, none on the public square.

I remember but three shade trees in town, all willows, one of the lot occupied by the Maple block, another where the First National Bank now stands and the other on Braden avenue, corner of 13th street.

The post office was kept in a one-story log building, one room with small shed kitchen, situated on the northeast corner of the square. I well remember my first visit to it. I wanted to mail a letter in the evening at about 8 o’clock, as the mail would leave early in the morning. Finding the post office was kept in a private dwelling, I knocked at the door; a voice responded, “Come in.” I did so and found myself in the bed room, which was also the living room and post office. The postmaster was out, his family in bed. I placed my letter on the table as directed and departed.

My next visit to the post office was in the day time, a week after, on the arrival of the weekly mail, which was quite an event. A “look-out” had been posted on the highest point in town to see if Mr. Clark, the mail carrier, a lone horseman, could be seen on the road; as there was no tree or houses to intervene he could be seen a long distance. The “look-out” reporting that he was on the way, all right, I went with the crowd to the post office; on his arrival he was quickly relieved of the mail pouch by one of the bystanders and its contests were emptied on the floor. A ring was formed around the pile and each one who could grab a package became for the time being Uncle Sam’s deputy postmaster. The package would soon be opened and the name called of the party to whom the enclosed letter was addressed, accompanied with jocose comments and surmises to the writer and its contents, such as “Here, John, is one from your girl in Indiana,” and so on.

On one of the failures of the mail carrier to put in an appearance, to wait seven long days was too much for one of our citizens, Judge Layton (we were all Judges, Generals or Colonels those days). He was looking for a letter from his affianced, so he footed it to Albia and got his letter. Whether its contents paid him for his walk of nearly 60 miles, he never told us, but letters in those days were very precious and highly prized, especially from pretty girls.

Whilst we early settlers of the county were fully satisfied with the location which we had chosen, yet we could not but at time painfully realize our isolation, shut off from the balance of the earth outside our own county and state, with no railroad within 26 miles of the east side of the Mississippi river, and with no roads or bridges in the county, we were frequently shut off from intercourse with our neighbors for days. Our merchants in 1852 and 1853 obtained most of their supplies from Keokuk and those supplies would be hauled to Chariton with ox teams. At that time our roads in the county, if we might term them such, followed the windings of the old Indian and Mormon trails. No attention was given to their improvement; the settlers were too few and the task too heavy. If the travelers came across a bad place, the remedy was simple --- go around it; nothing to hinder, with vacant land on each side.

As improvements were made, new farms opened up, the roads followed the fences; then, when bad places would be encountered, and there were many of them, a few rails were filched from the fence and thrown in the mud hole, forming our first bridges, which we called “corduroy.”

I well remember early in the 1850s traveling by Funk & Walkers stage line (principally Walker), trudging along by the side of the stage the greater part of the night, carrying a rail on my shoulder a good part of the time to help pry the old coach out of mud holes, working my passage, or rather the passage of my grip, which was safe in the coach. I presume many of you old settlers have had like experiences.

As the fences increased, the roads followed around them, became pretty long, and they became definitely located on the section lines as we have them today.