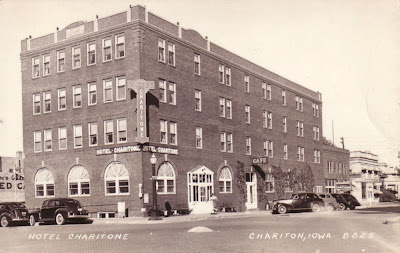 Several of us were trying to remember while looking around the gutted interior of Hotel Charitone's first floor Friday just when we'd last been inside. For me, it had been at least 40 years, primarily because for most of that time I was a regular visitor to Lucas County but not a full-time resident and the building has been closed for at least 10 years.

The draw 40 years ago was the restaurant, located east of the lobby and facing south toward Braden Avenue. And I'm sure Maxine Poush was operating it when I last ate there, primarily because Maxine and her husband, Emmett, were friends of my parents.

Visiting with their son, Allen, yesterday morning, he remembered that Maxine went to work at the Charitone during 1958 or 1960 and left about 1971, when the hotel was sold and she decided to sell the restaurant equipment and leave, too. During the latter part of her tenure there, she had also served as hotel manager. Since I was in Vietnam during 1970-71, my last meal there would have been before that.

Other than that, I don't have many Charitone memories, although my great-uncle, Jeremiah Miller, who died during 1986 at nearly 94, spent parts of at least one winter at the Charitone after his son, Warren, died during the fall of 1980.

Room rent was inexpensive at the time, as the hotel declined, and moving to town for the colder snowy months probably was a compromise with family members who most likely would have preferred it if moved from the farm, just west of Williamson Pond, permanently.

The Chariton square was a considerably different place in the 1980s, so many opportunities for meals were available nearby as was the opportunity to socialize.

I wish I knew when the courthouse basement lost its place as a social center for men of Uncle Jerry's age. When I was a kid, the colorfully tiled basement hallway was lined with throne-like oak armchairs (and spittoons) filled by older men who gathered there daily to gossip, chew, spit --- and observe comings and goings involving the men's restroom door. Because of this, the trip to and from the restroom --- then as now the only public restroom on the square --- could be mildly intimidating.

Entrance to the women's restroom, as I remember, was from outside on the east side of the courthouse into a sitting room supervised for some years at least by an attendant. All of these rather elaborate restroom arrangements dated from a time when trips to town from the country involved hours rather than minutes and both men and women needed places to regroup --- offered by the courthouse. All of this has been swept away.

I also remember, vaguely, getting my hair cut in the barber shop then located in the Charitone basement, located under the lobby to the west and entered by an exterior stair that still is there.

I just don't remember much about it, although I did see Friday a big barber chair that presumably came out of that shop sitting upstairs in the former Charitone lobby.

My dad and I for the most part patronized the barber shop on the south side of the square (where Chariton's only barber continues to operate a one-chair operation in a newer building).

The shop in that location then was a three-chair operation --- a long line of oak and leather chairs against the east wall for waiting customers (and others who wanted to catch up on the news) and three chairs, all staffed by barbers, on the west side in front of a long mirrored backbar; the floor, as I recall it, paved with small ceramic tiles. Was Dwight Clothier one of the barbers? That's the only name that comes to mind.

I miss barber shops --- not because I mind at all patronizing what used to be known as a "beauty shop." But I'm allergic to some scents and the smell of aggressively used and marketed "product" --- various glops applied for various reasons to hair --- can be overpowering in some of these places (not I should add the high-ceilinged, spacious shop I now patronize).

But when living in larger places I used to patronize Great Clips --- or somesuch name --- and leave not only with a haircut but also with watering eyes, congested chest, tubercular cough and a bad taste in my mouth.

At the old barber shop there was a faint smell of leather and tobacco plus the mild scents of shaving soap, talcum powder and lightly scented astringents in big bottles applied to the faces of those who combined a haircut with a straight-edge shave.

The cool thing now, of course, is that we can look forward to seeing that big "Hotel Charitone" sign lighted up at night at least occasionally again --- and to new generations of Charitone-based memories. 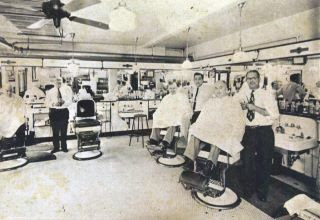 Footnote: Vickie Randall just posted this photo of the Charitone barber shop to the "You grew up in Chariton if your remember ..." Facebook page. She identifies the barbers as (from left) Jim Judd, Harry Randall (her dad) and Frances MacDonald. Later, according to Vickie, the barbers moved their shop to the south side of the square (where I remember it) and, sure enough, Dwight Clothier joined them.

Frances MacDonald, I remember in later years he had his own babershop out North of Chariton in a small garage beside his house. When we moved to Chariton in 1969 my Dad and I would go there for our haircuts. I would have been 10 years old and I remember my Dad always telling him to "cut it close" as he got out the electric shears. I also remember having a few family reunions in the lobby of the Charitone back in the 70's when they would rent that area out for activities.

I wish I could remember for sure where the south-side barber shop was. I think it was in the Kubitshek Block (where the U.S. Bank driveup is now) and that, I think, burned not long before 1969 --- the last (hopefully) major fire on the square.

I was using this article for a school essay and it helped a lot! Thanks!

When I was in first or second grade, my mom (Connie Kinshaw) went to beauty school and her first job was at the shop in the basement of the Charitone. Norma Ashby owned/managed the shop. That would have been 1965/1966. Mom eventually opened a shop in our house.

Dwight Clothier was indeed down the basement of the Charitone Hotel.
He was my Grandpa! My Mom, is Kay Clothier, his daughter!

Thank you for this neat article!

The barber shop on the South side that burned on March 31, 1965 was in the buildings West of Tommy Holder’s. I’d had my first non-Dad haircut there, and got a whole pack of Juicy Fruit gum at the end instead of one stick! That was also the first time that I was allowed to cross the Square all by myself, as Dad had left me there to go talk to Grandpa Piper. I was furious when I woke up that morning, fires at that time only known to me up to that time for the thrill, joy, and satisfaction amongst the firemen after a job well done in killing the beast. I was still innocent to the loss of a business and livelihood. To me, getting to be there would have been the perfect birthday present, and they had even used the pampered 1949 American LaFrance, my favorite truck, so Mom had to point out to me that Dad couldn’t have kept an eye out for me with all of that going on. Almost exactly 50 years later I had some business with Hy-Vee, and spoke to a woman who seemed to know a lot about Chariton. Turns out her Dad had been a barber in the basement of the Charitone (which I didn’t learn until my late teens that my Grandpa, Renus Johnson built as part of his first major job with his father, P.E.), then moved to the building that later burned on my birthday. Her Dad had given me my first barbershop haircut!

My Mom (Betty Danner) worked as a waitress at the Charitone circa 1945. My Dad first spied her there after returning from WWII. She loved to tell two stories that happened in the restaurant. The first one centered around a chef named Tom. He was cooking steaks for the Rotary when a cat did their business on the floor. Tom took his spatula scooped up it up and flung it outside. He quickly ran hot water over the spatula and went back to flipping steaks. The second story was about a customer--a returning soldier--Meacham Moore-- who pulled out a small cloth bag and showed (on the qt) her some diamonds that he had brought back. I had the pleasure of taking her back to the restored Charitone for lunch--she was approaching ninety at the time. She passed this Oct (2020) so these tales that she told me again that last day in the Caritone will be with me always.