John V. Faith and The Democrat 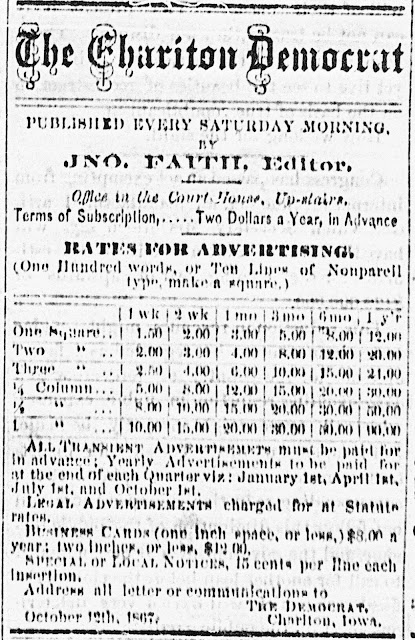 Those who think the volume and tone of 21st century political debate are aberrations might think otherwise after spending a little time with newspapers of, say, 150 years ago. In Lucas County, the best example of extreme partisanship would be The Democrat, founded by a firebrand named John V. Faith on the 12th of October, 1867, and still with us in the form of The Leader.

Although Faith didn't last long in Chariton, or anywhere else for that matter --- he lacked the sense of proportion needed to produce a newspaper with broad enough appeal to be financially viable --- he did leave behind the earliest surviving issues of a newspaper produced in Lucas County.

The Chariton Patriot, founded in 1857 by John Edwards and Republican in politics, was the first Lucas County newspaper to survive for any length of time --- and it, too, is still with us in the form of the Herald-Patriot. But the oldest Patriot issues that we have date from the early 1870s.

It's unwise to imagine that Republicans and Democrats of the late 1860s bore much resemblance to their counterparts today. At that time, Republicans tended to be more progressive and more liberal; Democrats, at the opposite end of the spectrum --- most jarringly on issues related to race. Faith presented the Democrat agenda of his era in what someone from the 21st century might call Tea Party terms, relying on the race card to fire up his constituency.

Dan Baker, a later editor of The Democrat/Leader who wrote Lucas County's 1881 history before moving on to California, described Faith as a "sharp, incisive writer, with occasional lapses from fairness, which often caused the loss of respect of his readers." That seems to be something of an understatement. "A distortion of facts," Baker continued, "invariably undermines confidence in the editor."

Faith apparently had difficulty at the start in finding suitable office space on a town square of ramshackle frame buildings grouped around what, when it rained, was a sea of mud. In late January of 1868, however, he moved his operation into the southwest corner room on the second floor of the old brick Lucas County Courthouse. It was common, then, for the county to rent courthouse space to professionals and several lawyers also had their offices in the courthouse at varying times.

Faith left town in 1871, press and all, taking his operation to Osceola --- but didn't last long there. The newspaper was relaunched in Chariton as The Leader during April of 1872 with Baker and Napoleon Bonaparte "Bone" Branner, recently returned to Lucas County after Confederate sservice in the Civil War, as editors.

As the years passed, the newspaper was known variously as The Leader and The Democrat, depending upon who owned it, until settling into place finally as The Leader. It's best-known owner probably was Smith H. Mallory, who restored The Democrat name during the years he was attempting, unsuccessfully, to become a political force in Iowa.

Although the first issue of The Democrat did not survive, the second --- of Oct. 19, 1867 --- has. In it, Faith republished the "Preface" that had appeared in the Oct. 12 issue with the following note: "We have received some two hundred subscribers since our last publication and it has been suggested that we re-publish our introductory in order that all might see it, the extra copies of our last edition having been exhausted before Monday morning."

Here's the text of that "preface":

"Custom has taught the public to expect, that when an editor issues his first paper, he will, in a long and windy "salutatory," introduce himself, and minutely foreshadow the course that he intends to pursue as an Editor. This is always an unpleasant duty, and we for one, would be glad to see the custom abolished.

"In sending out this, the first number of the Chariton Democrat, we feel that we are undertaking a work which is by no means trifling. The Democratic citizens of the County have long felt the want of an "organ" for the party, and now that the desire is about to be gratified in one respect, there is danger that they will expect too much of the Editor. They will feel like falling back in an attitude of repose, and depend upon him to do the work alone. Twice before has the attempt been made to establish a Democratic paper at Chariton, and each time the attempt has proved a failure. It is not for us to say where the fault lay, or whether this was the cause of failure. This is no apparent reason why such a paper cannot be made self-supporting in this city and county --- where all is enterprise, prosperity and hope. Yet we do not undertake the work with hopes of a golden future and easy life before us. We have twice before been "through the mill," and we still are only an editor. But we never have failed, and never had so fair a prospect as is here presented. To make the enterprise successful, we shall endeavor to identify it with the interests of the section of country from which it eminates, and to do this, we must have the encouragement and co-operation of those who are friendly to our work. Experience has taught us that this is essential, and from what we have readily seen of the Lucas County Democracy, we can freely say that we believe they will do their duty.

"As to our politics, of course we are Democratic. We shall, in our feeble manner, advocate only those principles which are Democratic. We cannot undertake to promise what we will do, but there are some things that we will not do, viz: We will not advocate the Negro Equality Radical doctrines; we shall not try to prove that a negro is better than a white man, or even as good a citizen; nor shall we insist that the negro race is more capable of governing the United States than is the white race. We shall not contend that it is just that a portion of the people on the one hand should be burdened with an enormous tax to support a monied aristocracy on the other; we shall not urge that it is right that the home-holder should receive his interest in gold, while the laborer is paid his hire in greenbacks; we shall not labor to show that it is for the best interests of the country that we should retain and perpetuate in office a general black-and-tan mixture of Radicals, negroes and thieves, to the exclusion and oppression of honest white man; and we shall fail to see the right by which a body of political demagogues who syle themselves the Congress of the United States can proclaim to the people that they are the makers and judges of the laws of the land, and proceed to establish and perpetuate a military oligarchy over a section of the country, the people whereof are more loyal and better citizens than themselves. These and many other like pernicious principles, we shall not adovcate. But we shall endeavor, by truth and consistency in all things, to show up the evils and corruption which now hold high carnival in every public department of our Local, State, and National Governments.

"We shall also endeavor to make the Democrat a Newspaper, giving as full a summary of the general news, from week to week, as the means at hand will enable us to do, and our space allow.

"We shall make our local department, the feature of our paper, and to this end we shall depend upon our friends to aid us, by sending to us such items as are of local interest, as they come under their observation. We shall also use care in the selection of our miscellaneous readings; and by industry in all these departments, we hope to make the Democrat a permanent institution, and a welcome visitor to every Democratic household."
Posted by Frank D. Myers at 6:08 AM