Good news for the Charitone 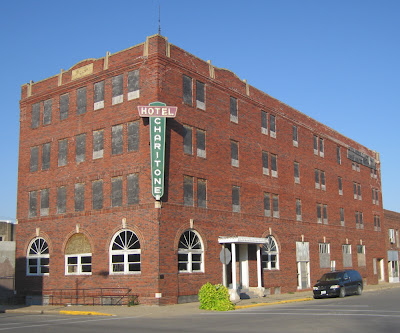 I think it’s safe to say, since preliminary announcements are being made, that title to the Hotel Charitone has returned to Lucas County --- and that’s very good news.

Owned for years by someone from another state who acquired it to redevelop and then lost control of the situation, it’s been deteriorating for years --- roof failing, small portions of its brick facing peeling away, windows boarded to prevent glass from falling into the street. The structure, designed by Chariton architect William Perkins and on the National Register of Historic Places, remains structurally sound, however.

To settle a nuisance suit filed by the city, the owner now has transferred title to an outfit called Hotel Charitone LLC. Although details concerning the new arrangement still are being worked out and won't be announced for some time, the limited liability company is not associated with the city, the county or the Chariton Chamber of Commerce.

Long-term goals, I would imagine, are to stabilize the structure and then redevelop it into affordable housing --- a strategy used successfully by other cities faced with similar situations. The most recent example in southern Iowa is Creston’s Hotel Iowana, larger than the Charitone and abandoned for years but as of late last year fully restored, redeveloped and operating.

A frustration during recent years has been to watch projects elsewhere take advantage of financial incentives available for redevelopment projects like the Iowana while the Charitone’s owner dithered or took no action at all.

Another frustration has been to hear “just tear it down” sometimes from folks who really haven’t considered (a) what a blow that would be to the Chariton square and Chariton in general or (b) just how much demolition would cost. Anyhow, I think this is a really hopeful development.

The Charitone actually is the second hotel to be located on its site at the northeast corner of the square. Here’s the text of an article about the site published in The Herald Patriot during 1923 as the brand new Charitone was preparing to open its doors:

The new Hotel Charitone occupies one of the best building locations in Chariton. The corner site is especially desirable for hotel purposes as it is midway between the railway stations, affords outlet on the main highways and gives easy access to all local places of interest. However, the builders of Hotel Charitone were not the first to select this corner for a public stopping place. In the sixties (1860s) a man known as Jimmie Gallagher operated a popular tavern on the same site.

Jimmie Gallagher, a thoroughbred son of Ireland, came to Chariton from Rome, Iowa, a small town west of Mt. Pleasant on the Burlington line. It is said he followed the railroad west and on his arrival at Chariton, considered this a desirable place for residence and business, and accordingly launched the hotel enterprise. This was, it is believed, in about the year 1865. The building in which he opened was about 45x60 feet, with main entrance on the south as at Hotel Charitone, but nearer the corner. Gallagher’s House, as the place was known, was a two-story frame structure and had the reputation as one of the best inns in this part of the state. The hotel office was in the corner room, as in the present new structure, and the dining room joined the office on the east. In the basement was the bar, well equipped and stocked to serve incoming thirsty travelers who had come perhaps ten to 30 miles on horseback or in wagons. It is noted that the travelers from afar were, however, not the only ones who patronized the bar.

Local citizens are said to have often frequented the basement room for a wee drap from the cup.

After Gallagher had been in business for ten or twelve years, the house passed into the hands of Mrs. Eliza Crall. G.W. Parlin of Chariton also ran the house for some time and a man named Fridley was one of the operators of the early hotel. Mrs. Margaret Maloney was in charge of the establishment from 1879 to 1882. A man by the name of Peppers is said to have been the last person to engage in the hotel business on this corner. The house was built in the early sixties, say local early residents.

S.H. Mallory later came into possession of the corner lot which he owned for several years. The building was replaced by a wooden one-story structure of some length. This faced the west and was used by C.H. Palmer as a store. Here was a stock of notions and for some years the corner site was a part of the merchantile section of the town. This building burned and the corner lot has since been unoccupied except for temporary structures used for tabernacle meetings, entertainments, etc. 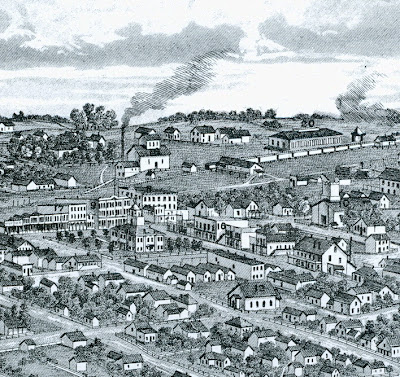 The early inn on the Charitone Hotel corner is identified as “Chariton House” on a generally accurate bird’s eye sketch of the town that appears in the 1875 Andreas Atlas. The Chariton House, to the right, has an “11” on its roof, keyed to an explainer elsewhere on the main page.
Posted by Frank D. Myers at 6:34 AM