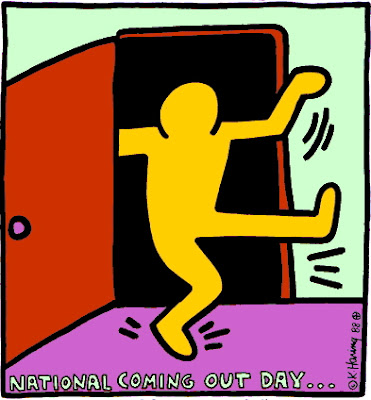 Heavens to betsy, I forgot that last Tuesday was National Coming Out Day. That’s what one meeting, two funerals and the arrival of three friends from far-away places will do to a guy.

I’m not sure what I’d have done differently anyway. When you’re my age, you’ve already come out so many times for so many reasons to so many people --- and quite frankly it gets tedious. Engraved announcements would be simpler. One reason I blog is the fact I’m too lazy to address envelopes. Or maybe calling cards: “Hello, my name is Frank and I’m ….”

My last coming out misadventure, which wasn’t intended to be a coming out at all, involved a newspaper column I wrote years ago about a movie that in some ways paralleled a portion of my life, overlooking the fact it would be perceived as extraordinary. That piece traveled widely, I was widely congratulated for coming out when I hadn’t been in, received an astonishing number of heart-breaking messages from closeted gay folks and also a moderate degree of abuse. In most instances, when abused, I got even.

A majority of folks don’t care these days, despite the yappings of wingnut pseudochristians and Republican politicians. If nothing else, the fights against DADT and for marriage equality have proved LGBT people are just as boring as straight folks. All we want to do is serve in the military, get married and have kids --- just like Dad and Mom, for heaven’s sake. Those who still imagine there’s something called the “gay lifestyle” are in for a big disappointment.

National Coming Out Day has been around since 1988, its date the anniversary of Oct. 11, 1987, when about 500,000 people participated in the March on Washington for Lesbian and Gay Rights. We’ve come a long way.

There are only two things, really, to remember about coming out. If you’re older and reasonably secure and haven’t, you probably should. That way you’ll help ensure that LGBT youngsters don’t have to put up with the bullshit you did. You’ll also be a step closer to living authentically. It can be really scary, even now. Don’t beat yourself up if you can’t.

If you’re younger, make sure you can trust your parents and that you’ll be protected at school before you make a move. Some parents, especially evangelical Christian parents, can’t be trusted. If there’s doubt, play along, play it safe, take what you need and when you’re safely out of there and on your own --- then do it.

It’s a lot better in Iowa than it used to be, especially in larger places like Des Moines, Cedar Rapids and the like --- despite the occasional outlandish rhetoric. Maybe, maybe not in Chariton and its counterparts, however. Here, some days, the message on the billboard still could read “Good Enuf for Usn’s” with subtext, “If you’re different then get the hell out.” Occasionally, you'll still read those kinds of sentiments in the local newspaper.

And that’s too bad. Iowa needs its best and brightest right now --- including those who are lesbian, gay, bisexual and transgender not to mention all the other varying shades and sorts in humanity’s rainbow.
Posted by Frank D. Myers at 5:51 AM