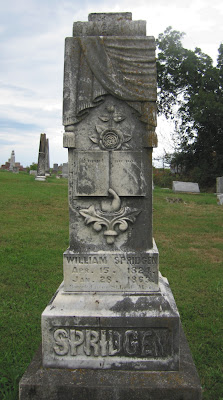 William Spridgen's inscription is on the west face of the family stone.

There's another Last Chance story to tell, and I'd better do this before Elizabeth Spridgen's obituary is eaten by a pile of paper, something that happens a lot around here.

The Spridgen family stone, which memorializes seven people although only two are buried here, is located in the extreme southwest corner of the cemetery. Unlike other Last Chance stones, marching rigorously north to south, the monument and two flanking headstones are canted slightly northeast to southwest for no apparent reason.

According to Elizabeth's obituary, published in The Chariton Patriot on April 24, 1913, she was born Elizabeth Limbird in London on April 17, 1826, and was married in England to William Spridgen on May 25, 1851, when she was 25. Other accounts give her birth and marriage place as Lincolnshire.

The newlyweds set sail immediately for the United States and lived briefly at Fort Wayne, Indiana, in Ohio and in Illinois before arriving in the Last Chance neighborhood during 1859. They apparently settled just over the county line into Clarke.

Children buried in Ohio are commemorated on the east face.

Elizabeth, widowed now with three small children, "remained on the farm where her husband left her when he went to the war" until 1909, when she was in her 80s.

The inscription on the south face of the stone commemorates Albert E. Spridgen, who is buried here with his mother. The family stone probably was erected soon after his death. 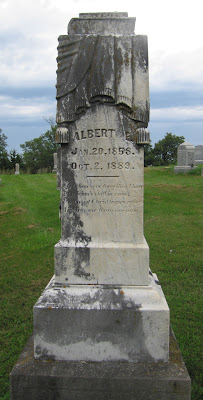 Born Jan. 20, 1858, he died at Clarinda on Oct. 2, 1889, age 31. Iowa's third "insane asylum" had opened at Clarinda during 1888, and this apparently was where his death occurred. The inscription that follows Albert's name and date suggest some of the circumstances:

Affliction sore long time I bore,
Physician's skill in vain.
It pleased Christ to give relief,
And free me from my pain.


Two of the Spridgen children lived to marry and their names and dates of birth are recorded below Elizabeth's inscription on the stone's north face: Charles L., named for his deceased younger brother, born Dec. 28, 1859; and Julia A., born Oct. 28, 1861. Charles, who died Jan. 5, 1931, is buried elsewhere at Last Chance with his wife, Eliza. They had three children. Julia, who married Benjamin Darst Barger, a banker, died during 1942 and is buried with her husband at the Garden Grove Cemetery. Their only child died young.

Elizabeth Spridgen died April 21, 1913, a few days after her 87th birthday, at the home of her daughter, and was buried near her son, Albert, at Last Chance.