Who was buried first at Oxford? 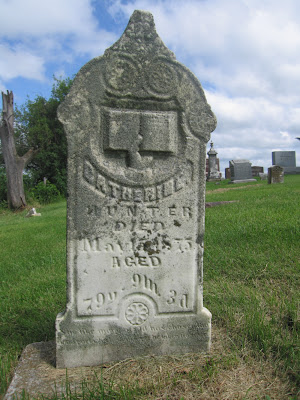 Catherine Hunter reportedly was the first to be buried at Oxford Cemetery, during 1875, but tombstones recording deaths in the 1860s raise doubts about that assertion.

There is, I suppose, a grim distinction in being the first to be buried in a cemetery. It's considerably more fun and far less hazardous to one's health, however, to play history detective and try to figure out who the first-burieds were.

I thought I had the answer in hand regarding Oxford Cemetery's first burial when I came across the following item yesterday while chasing Henry Kubitshek through Darlene Arnold's transcription of local news from The Chariton Patriot's earliest issues:

"A new burying ground has been started near the new M.E. church 3 or 4 miles northeast of town, Mr. Taylor giving the ground therefor. Mrs. Hunter, the lady we mentioned last week as being burned to death was the first to be buried there."

This was from The Patriot of Wednesday, May 26, 1875. And Henry Kubitshek has nothing to do with Oxford, by the way --- he's part of another project.

The reference obviously is to Oxford Methodist Episcopal Church, once located two miles east and three miles north of Chariton in Lincoln Township. Oxford School stood beside the church on the west side of the road. Oxford Cemetery remains just across the road to the east of where church and school once were.

Intrigued, I backtracked to The Patriot of May 19, 1875, and found the account of "Mrs.Hunter's" death. Please note that the Patriot editor was misinformed when he identified the victim. She was not Mrs. Elias Hunter, as reported, but instead his sister, Catherine Hunter. Here's the article:

"On last Saturday forenoon, the residence of Mr. Elias Hunter, who lives about 6 miles northeast of Chariton, burned down. The fire caught in the upper portion of the building from a defective flue, and the whole of the upper story was in flames before anyone became aware of what was going on. Finally Mrs. Hunter, who was alone in the house, discovered the existence of fire, and with a pail of water started to go upstairs. She had only opened the stair door when a draft of hot air and fire struck here in the face and enveloped her to such an extent that the fire was breathed into her lungs and her clothes at once set on fire. Overcome with this she fell to the floor, and, before the arrival of any assistance, was so badly burned that she died on the evening of the same day. Mr. Hunter's house was a two story one and worth probably $1,000. In addition to the loss of the entire building, the whole of the contents were destroyed, making the loss near $1,500, besides the loss of life, which was, of course the sad part of the calamity. Mr. Hunter is one of our oldest citizens, and his many friends will sympathize with him in his misfortune."

Of course, I had to drive out to Oxford to visit Catherine and found her near the north fence midway between the east and west boundaries of the cemetery, occupant of the only marked grave on Lot No. 9, owned according to my grandfather's plat of the cemetery by her brother, Elias.

Granddad (William Ambrose Miller) helped replat Oxford during the 1930s and kept his own copy of the large hand-drawn plat, which I now have. His notes regarding the cemetery on that plat read as follows:

"In 1878, the Oxford Cemetery Co. purchased 1 acre of ground from Thomas Taylor. It was 16 rods east to west and 10 rods north to south, located in the N.W. corner of the S.W. quarter of the N.W. quarter of Sec. 11-71-21 in Lincoln Twp., Lucas Co. Then in June 1894 the company purchased another acre described as follows --- Commencing at the N.E. corner of the Cemetery running east 3 rods then south 16 rods and 14 feet, thence west 19 rods, thence north 6 rods and 14 ft. to the S.W. corner of the cemetery. Lots 8 x 48 feet. The original had two roadways across it that were 8 ft. wide. These were later divided into lots 8x8 ft."

According to Granddad's plat, there are 102 numbered full-sized lots in Oxford. The small square lots created by subdividing the original driveways are numbered 103-169. "Lots 40 and 42," according to the notes, "contain unmarked graves, eight or more. This corner (is) Potters Field."  Lot No. 61 was vacant at the time the plat was made, Granddad wrote, because "E.H. Selby was taken to the Chariton Cemetery."

So, here we have the 1875 newspaper report of the "new" Oxford Cemetery and Granddad's notes stating that the actual purchase of land from Thomas Taylor was completed during 1878.

If Catherine's status as the first buried here is going to stand, however, there are older graves --- all belonging to members of her extended family --- to be accounted for.

Trying to sort out the Best relationships unless you're related could be hazardous, by the way --- cousins married cousins and it gets rather confusing.

The marked adult grave belongs to Catherine Hunter's sister, Margaret (Hunter) Alexander, who died Jan. 16, 1865. If her husband, John Alexander, who reportedly died in Lucas County ca. 1870, is buried here as well, that grave is not marked.

So the question I can't answer is --- were burials at what became Oxford taking place before the mid-1870s when the cemetery was officially organized, which is entirely possible, or were the bodies of related Bests and Alexanders, originally buried elsewhere, brought here and reburied after the cemetery was first platted. I'm not sure that question ever will be answered.

It does seem fairly certain that Catherine Hunter is not buried alone on the Elias Hunter lot, however. She and Elias were among the nine children of Alexander and Mary (Best) Hunter, who lived and died in Westmoreland County, Pennsylvania, Mary on Nov. 24, 1844, and Alexander, on April 30, 1852.

Of those children, according to online family pedigrees, Thomas, Jane (Peebles) and Hannah (McMillen) remained in Pennsylvania.

When the 1880 federal census of Lincoln Township was taken, Elizabeth Hunter, then 75, headed a household that included her elder sister, Mary Best, age 80, whose husband James reportedly had died in Westmoreland County during 1870 and who apparently had moved west thereafter; and two nephews, Andrew and Frank Alexander, youngest sons of John and Margaret.

So it seems likely that Catherine was joined, as they died, by Elias, Elizabeth and Mary --- but that the graves of the three latter never were marked. It seems unlikely brother James Hunter is buried here, but if bodies were relocated from elsewhere after Oxford's founding, who knows?
Posted by Frank D. Myers at 7:05 AM

I've have probably a dozen families in my family tree who have come from Westmoreland county, Pennsylvania. At least three of my families were conventors of the Presbytery church but the rest I don't know. Do you know what caused so many families from Westmoreland to uproot and come to Iowa? Was it as simple as it was the next new area opened up and ready to be settled?

Hi Ed --- My great-great-grandparents, Jacob and Harriet (Dick) Myers, came from Westmoreland County to Lucas County in 1867 with all their children as well as a son-in-law and a few other relatives and friends. I'm not sure of the factors affecting everyone, but Jacob (who already had had a career as railroad contractor, an industry that was slowing in Pennsylvania) wanted to farm on a large scale, and could not do that in Westmoreland County. He lived near New Florence in the rough and not farmer-friendly northeast corner of Westmoreland. So in order to farm on the scale he wanted, and to allow his children to farm, too, he had to take the them elsewhere. Lots of land still was available in Iowa in 1867, the trains reached Lucas County during 1867, too, so transportation was not difficult --- so off they went.

I am a descendant from the Best/Hunters/Alexanders buried in the Oxford Cemetery. You're right, it can be confusing. Based on Elizabeth Creighton Alexander Best's Early Day Remincenses of 1855 at the "Old Settler Reunion" she and her husband Joseph followed Joseph's brother, J.C. (James Cruzen) Best out to Iowa. I would assume this was during the time in which free land was offered for settling. Joseph served in the Civil War (I cannot remember the Iowa Regiment off the top of my head, sorry.) Joseph and Elizabeth's grandson William is my grandfather.

I just made my own personal research trip Chariton. In fact I just left Chariton today for home. I went to Oxford Cemetery. I found the stone of Margaret Hunter Alexander (Elizabeth's mother). I was broken. However, under her name on the stone is the name of her husband; so I am assuming they are buried there together although he died later.