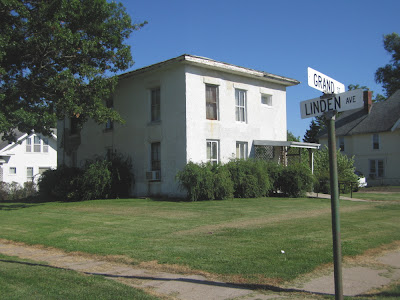 It always makes me happy to reunite an old building with some of its history, so I was really happy this week when I discovered that this plain stucco-over-brick house at the corner of South Grand and Linden streets in Chariton started life as the Kubitshek family home. It’s not much to look at now, but in its day I’m sure it was quite the house.

I’ve always been kind of interested in it because it looks old, and as it turns out it is, built during 1875 --- a rare early brick house in a town where most homes were of frame construction until architect William L. Perkins came along early in the 20th century and popularized domestic brick (and concrete) --- quite innovative in his time.

The Kubitshek house is a very plain rectangle, although it seems to me there once was a bay window on its south façade. The heavy stucco covering hides the brickwork entirely and any trim that it once had, and it probably had considerable, has long since been removed. There may have been porches, too. I’d love to see a pre-1900 photo of it, but that seems unlikely.

My great-aunt, Vesta (Brenaman) Miller, lived (and died) in the ground floor apartment of this house after moving into Chariton from the farm after the death of Uncle Clair Miller. But for some reason I can’t remember a thing about the interior.

Henry Kubitshek is a really interesting guy and I’ll have more to write about him another time. He was Chariton’s first long-term Jewish resident, a grocer and entrepreneur who accumulated considerable property.

A veteran of the Civil War, Henry arrived in Chariton with his wife, Deborah, not long after the war ended, perhaps during 1870.

His home, just south of the post office and across Grand from First Baptist Church, can be dated to late summer and fall, 1875, because The Chariton Patriot reported in its Aug. 18 issue: “Henry Kubitshek is building a neat two story brick residence on the corner lot north of the Christian Church.” The Patriot estimated the home’s cost at $4,000 --- a considerable amount at that time.

Henry had purchased the property, Lot No. 2 in Block 16 of the original town of Chariton, on May 18, 1875, from Daniel Eikenberry.

The lot immediately south of the Kubitshek property was sold on Nov. 16, 1866, to the Christian Church (Disciples of Christ) and that congregation built its first church there soon thereafter. About 1891, the Christians relocated north of the northeast corner of the square and the church building was sold to the Cumberland Presbyterians on March 1, 1892. That congregation used the church until 1898, when it was sold to H. B. Stewart and the building demolished. Subsequently, the lot was divided in half length-wise and two large homes built upon it. One of those houses, which had become derelict, was torn down recently; the other still stands.

The two southern-most lots facing Grand now are occupied by the Stuart home and, on the corner, the Masonic Temple.

The Kubitsheks lived in their fine brick home until about 1900, when they moved from Chariton to Denver, Colorado, where one of their daughters lived. The property was transferred to Margaret Jane Rubel in a deed dated Sept. 30, 1899.

At some point thereafter, the back half of the lot was subdivided and a newer home built east of the Kubitshek house, facing Linden Street.

Henry died in Denver during 1914 and Deborah, during the 1920s. But their house, somewhat battered and probably beyond restoration, still is going strong.
Posted by Frank D. Myers at 7:03 AM