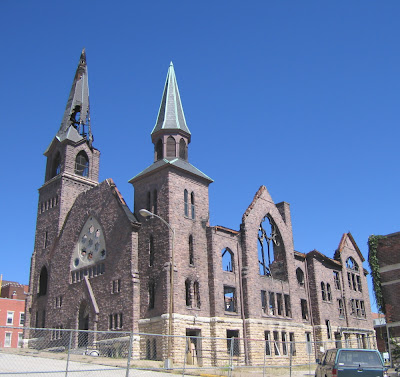 Way back in October of 2007 I wrote about Burlington’s wonderful old downtown First United Methodist Church, then a striking jasper granite shell after having been gutted by fire, set by an arsonist, the previous April 29. You can read that entry here. This photo shows how it looked then.
At that point, the congregation was deeply divided over what to do next --- although an expenditure in excess of $300,000 had just been narrowly approved to stabilize the shell.
A good share of the congregation wanted to build a new church on spacious grounds south of town and abandon downtown entirely. Another good share of the congregation wanted to rebuild within the existing walls and preserve historic ties to downtown. Roughly $8 million in insurance money was available, if the church was rebuilt downtown.
Eventually, by 2009, opinion had tipped toward rebuilding within the existing shell. By now, construction has been ongoing for a little less than two years.
It’s a wonderful story of preservation in action that you can follow on the congregation’s Web site, which is located here. Navigate to photo galleries and other information by utilizing the menu across the top of the main Web page.
Walls have been stabilized and in some cases rebuilt, fascinating things have turned up (including a series of small stained glass windows that survived the fire because they had been blocked from the inside many years earlier), the steel structure that is allowing a new church to be built inside the old walls is in place, flooring has begun and the project’s (with a total cost now estimated at at least $9.4 million) end is in sight, hopefully early during 2012.
One of the most exciting developments, also from a preservation standpoint, was the congregation’s decision during 2009, soon after voting to proceed downtown, to purchase a vacant former department store across the alley south of the church known as the Stoermers or Boesch Building, but now rechristened The Loft on Jefferson (Street).
Construction work there has been ongoing in conjunction with rebuilding the church proper. The four-story building, which will be connected to the church by a skywalk, will contain a commons area on its first floor, intended as a gateway to and from downtown Burlington for the church. This level will be aimed at serving the entire Burlington community.
The second floor will contain the congregation’s parish hall and a commercial kitchen. A use for the third floor, which won’t be finished right now, has yet to be determined. The roof of the fourth floor will be raised and a gymnasium and locker rooms added there. Blocked windows on the old building’s street façade already have been opened and the structure returned to its earlier historic look.
It’s quite a story, and if you’re interested old churches or preservation issues, or both, you’ll want to take a look.
Posted by Frank D. Myers at 6:22 AM