The life and times of Eliza Ann Carter 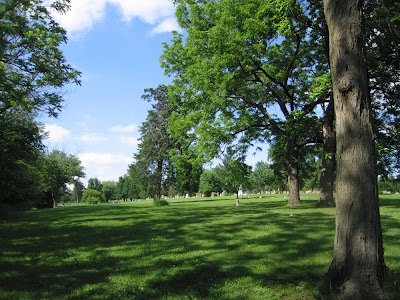 This peaceful and unmarked area in the southwest corner of Chariton's cemetery, potters field, is the final resting place of Eliza Ann Carter, several members of her family and more than 100 other neighbors, friends and strangers who died in poverty.
A guest at the museum the other day, examining a turn-of-the-century photo of a Chariton High School football team that included a black player, expressed surprise at his presence. Since the population here now is overwhelmingly white, her surprise was not that surprising.
I responded as best I could --- that Lucas County’s black population, when coal mining was at its peak, reached at least a couple of hundred, but that because there was no economic opportunity here for black people as mining changed, then declined, most of our black neighbors left.
Looking at census records 1850-1920, I could find no back residents at all until 1870, when 38 black people were enumerated, most in Chariton. Many of these, perhaps, were recently freed slaves (several from Missouri) who had come north in search of more opportunity. But by 1880, the black population had dropped to 29.
By 1900, the next available census year (1890 census records were destroyed in a fire), Lucas County’s black population at risen to 195. Most were residents of Lucas/Cleveland, our leading coal mining center, and Chariton, also with its share of nearby mines.
That doesn’t seem like many, but even Des Moines had only about 1,100 black residents in that year.
And the black populations of both Lucas and Polk paled in comparison to that of the legendary mining town of Buxton, just down the road in neighboring Monroe County, which by 1905 had 2,700 black residents and 1,991 white. Buxton, remarkable for the racial harmony that prevailed there, was at that time the largest coal mining town west of the Mississippi.
About 200 probably was as good as the racial mix ever got in Lucas County. As at Buxton and elsewhere, many of these black miners had been recruited in the South by mine owners in search of (a) cheap laborers who would (b) unwittingly break the strikes of more expensive white workers by moving north and going to work,
By 1910, the black population had dropped to 79 and by 1920, to 48. By the time my dad was in high school during the 1930s, there still were a few black families --- but young people almost always left because there was neither economic opportunity nor community support here. When I was a kid, only a handful of older black people remained.
+++
Eliza Ann Carter, who was born in slavery and died at Chariton during 1923, reportedly in her 112th year, would have been able to tell us a good deal about Lucas County’s black history, but so far as I know she was never asked to do so.
There are some difficulties involving Eliza’s age, although there’s no doubt that she died rich in years and experience, much of it involving hardship. Eliza tended to grow old by leaps and bounds rather than in 10-year increments as census years passed. She was enumerated as 59 in 1900 when  first found in Chariton, as 75 in 1910 and as 104 by 1920.
In all fairness, she probably didn’t know her birth year --- and may very well have followed a not unusual path: Understating age until old age became a badge of honor, then overstating it. A letter found among the possessions of Chariton attorney and mayor G.W. Alexander seems to have had something to do with establishing 1811 as a birth year for Eliza, but most likely there’s no hope of tracking that letter down.
Whatever the case, Eliza --- or “Auntie Carter" --- is one of those exceptional people you come across now and then who you’d really like to talk to. Working as a washerwoman in 1900, I’m guessing her family arrived with the miners.
Eliza is buried in the potter’s field section of the Chariton Cemetery with at least 100 and probably more Lucas Countyans who were among the poorest of our poor. Because her grave is unmarked, it cannot be located specifically --- so even that sort of visit is beyond us. . But at least she’s in a pretty spot.
Here’s Eliza Ann’s obituary, taken from The Herald-Patriot of April 8, 1923. Published with the obituary was the text of an oddly-written news article dating from 1919 that mentions the G.W. Alexander letter. Note that her birthplace is given here as Almira County, Virginia, but that there is no such county in Virginia. There is, however, an Amelia County.

Eliza Ann Blue was born May 17, 1811, in Almira county, Va., being born in slavery. At the age of 12 years she was placed on the slave block and sold to the highest bidder. Mr. Geo. Carr became her new master and he presented her as a life time gift to his sister. At the death of his sister she took up her home with Mr. Carr, where she remained until the Emancipation.
Friday evening, April 6, 1923, at 9:30 o’clock she peacefully fell asleep at the home of her daughter, Mrs. Harriett Martin, after an extended illness of several weeks with dropsy.
Thus a life of almost 112 years has ended, and to say it has been a life of varied experiences, in toil, in slavery, and in freedom, is putting it mildly, she having passed through that period of history when human beings were bartered and sold, much like beasts of burden.
In the years of slavery she was married to Mr. Carter, and to this union 12 children were born. Those who survive her are Oscar Carter of Chicago; Chas. Carter of Kansas City; and Mrs. Harriett Martin of this city. She has been a pioneer resident of Chariton having lived here nearly a half century. Many have come to know Aunty Carter as our oldest and spryest citizen for her years, and along with this she has had kindly words of greeting for all. In her declining years she always sought to please “Her Good Master” and oft times expressed His goodness to her and died with that hope of a Lord and Saviour. Her husband preceded her in death many years ago. The sympathy of the community is extended to the family in their hour of sorrow.
Funeral services were conducted at the home of her daughter, Mrs. Harriett Martin, on Sunday afternoon, April 8, at 2 o’clock, by J. L. Shelton of the I.B.S.A. (International Bible Students Association, later Jehovah’s Witnesses). Interment in the Chariton cemetery.
+++
From an issue of The Chariton Leader, published in 1919, we take the following regarding Mrs. Carter:
Lucas county holds the banner over Marion county for longevity and a glory clusters all about as brilliant as the pyrotechnic emanating from an X-ray, charged with greased lightning. The oldest inhabitant of that county, who resides at Knoxville, is but a little the rise of 100 years, while Auntie Carter of this city has attained the ripe old age of 108 years (in 1919) and is the mother of several generations. She not only is old but looks old, and gets about her hovel quite active. She was born in Virginia in 1811. Therefore half of her life has been spent in bondage and the other half in individual poverty. When Capt. G.W. Alexander, a native of Tennessee, who was a veteran of the Confederate Army, as well as a former mayor of Chariton, died, he left a letter in his effects from her former master stating that she had been born on his plantation in Virginia in 1811. It has been a long journey from the cradle of slavery to the voting booth of the free, but soon Auntie Carter will be privileged to cast her ballot and inform the judge that her sovereign name is Eliza.

Thank you, for posting this about my grandmothers it means alot to me to see that they are remembered. Tiarra Cooley