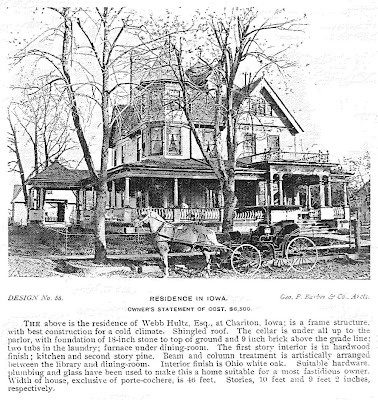 Paula Mohr, of the State Historic Preservation Office, recently ran across material regarding this old Chariton house in a 1901 pattern book published by George Barber, one of America's most prolific Victorian architects. She forwarded it to the Chariton Historic Preservation Commission and we played identify-the-house with it for a while this week.

Two of us took home top prizes --- Alyse, who probably knows more about Chariton's buildings than anyone else; and me, who recognized the photograph as one published in a program booklet for the 1903 Lucas County Chautauqua Assembly.

Built during 1898 by Webb and Ida (Blizzard) Hultz, the house had been sold by 1903 to John Culbertson, a Chariton banker. As is the case with many other fine old Chariton houses, it has by now been demolished.

It was located in the 200 block of South Main Street --- the second block south of the southwest corner of the square --- west of the quarter block now occupied by Fielding Funeral Home (the oldest part of which was built by Frank and Minnie Arnold Crocker). First Baptist Church occupies the northeast corner of the block.

At some point the west half of the block fell vicitim to a Chariton-style scorched earth crusade. The northwest corner of the block, where at least two fine old homes once were located, now is a small park-like area and an overflow parking lot, both owned I believe by First Baptist.

The southwest quarter of the block consists of a large vacant lot (with Morton Building at its alley end), where the Hultz/Culbertson house was located, and a more modest home in need of paint  at the end, converted into apartments.

I remember the Hultz/Culbertson house, converted by the time I was a kid into what looked like a well-maintained apartment building although minus its porches. The turret made it hard to miss. I'm not sure why it was taken down --- perhaps someone had a plan for the site that never was carried out. That seems a shame.

As I recall it, the quarter block north of the alley contained a home at the northwest corner that probably was brick covered in pinkish-colored stucco with quite elaborate rear gardens. This had been a physician's home, although I don't recall which one. Another old house converted into a nursing home came next. There may or may have been a third house in this quarter block --- I just don't remember.

Whatever the case, all of this is gone now.

The Chariton Patriot of July 28, 1898, contained on its front page the following article headlined "The Hultz Residence."

"Mr. and Mrs. Webb Hultz will move into the upstairs of their handsome residence the first of next week. It will be a couple of weeks before the carpenters will be through with the lower floor. This elegant and commodious dwelling will cost $7,000, without furnishings, before it is completed. The rooms of the first floor are very large and pleasant and will be furnished in oak. They will have parquetry flooring and will probably be the finest floors of any in the city. The parlor is 18x22 (18x18 according to the plan), the dining room 14x36 (also 18x18 according to the plan), and the reception hall is 12x14. 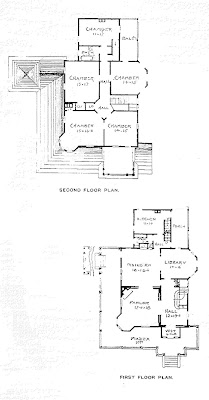 "The kitchen is large and has a large kitchen-cupboard and pantry built in the wall. The laundry is in the basement. A twelve-foot porch extends along the entire north and west sides of the house. In the second story is found the sitting room and nursery, bed room and bath rooms, all well appointed and conveniently built. A dumb waiter is built to run from the basement to the third story.

The structure of the entire house points to comfort and convenience as the chief considerations noted. No expense was spared to provide elegance along with the foregoing essential characteristics of a truly beautiful home. Johnson & Best are the contractors, and they surely have a worthy work of art in the home of Mr. and Mrs. Hultz."

Webb (Isaac Webster)  Hultz was born Feb. 10, 1855, at Pittsburgh, and apparently arrived in Chariton during the early 1880s.

A front-page article in the Patriot of Sept. 25, 1902, when the Hultz family was preparing to move to Nebraska, states that "Mr. Hultz has been a traveling salesman for the firm of Tone Brothers, Des Moines (manufacturer and distributor of spices then and now), twenty-two years in the same territory, and during that long period never missed a single trip nor failed to call on every customer in the territory under his charge. Fidelity and good common sense are his prominent characteristics."

Webb and Ida Hultz had four children, all born in Chariton --- Kenneth, Louise, Donald and Dorothy --- and, their fine new 1898 home suggests, did not plan to leave.

But circumstances somehow changed and the Patriot of Sept. 25 reported that "Webb Hultz will remove with his family Oct. 1, to Alliance, Neb., where Mr. Hultz is interested in a large cattle ranch."

The family remained in Nebraska for about eight years, but had sold out there and returned to Chariton by 1910 where he was named vice-president of the State Savings Bank.

Early in 1913, however, Webb's health began to fail and he was diagnosed with "valvular heart trouble." He resigned his banking position and invested in a ranch near Phoenix, Arizona, where the family moved during April of that year, hoping the change in climate would facilitate recovery of good health. That was not to be, however, and he died of an apparent heart attack in Arizona on May 20, 1913. Funeral services took place in Phoenix and burial was in Greenwood Cemetery there. Ida Hultz continued to live in Phoenix until her death during April of 1942.

Here's a portion of the tribute to Webb Hultz published on the front page of The Patriot of May 22, 1913, just after news of his death had reached Chariton:

"Webb Hultz was one of the best citizens Chariton ever had. He was affable and pleasant to all, a careful and painstaking business man, progressive in his ideas, and advocated and was ever ready to assist in the things which promoted the public welfare. He was a good christian man, and had been an active and faithful member of the First Presbyterian church of this city for many years, filling the office of trustee for some time. He possessed a fine tenor voice and for some time assisted in the choir. He was conscientious and upright in his dealings and lived a life worthy of emulation."
Posted by Frank D. Myers at 6:16 AM