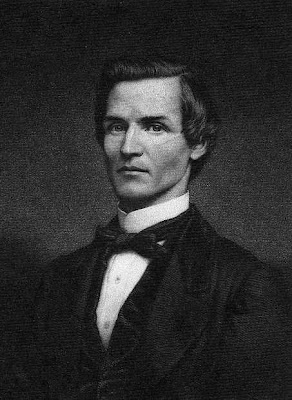 John Hill Aughey in 1860.
One of this week’s challenges is to condense into a few words, suitable for a museum case explainer card, the significance of the Rev. John Hill Aughey and his book, “Tupelo,” part of a Civil War sesquicentennial display.
Aughey, who was born in New York and died in New Jersey, actually is little more than a footnote to Lucas County history. He was pastor of First Presbyterian Church in Chariton during the mid-1880s, then returned in old age to serve again.
During the Civil War, however, he was a Union firebrand, celebrated author of 1863’s “The Iron Furnace: or, Slavery and Secession,” widely influential in the North. “Tupelo,” completed during the 1880s when Aughey was preaching in Chariton, was a revised and expanded version of “The Iron Furnace,” and it, too, was something of a best-seller. Aughey was a compelling writer.
Say “Aughey” now, however, and the result would be a blank stare. That’s too bad. He was an interesting and, in his time, influential guy.
+++
Born May 8, 1828, in New Hartford, New York, John moved with his family to Ohio as a child and graduated from Franklin College in New Athens in 1851, then moved south to teach in Mississippi.
He entered the ministry in 1856 as pastor of Bethany Presbyterian Church at Iuka, Mississippi. A year later, on Jan. 22, 1857, he married Mary J. Paden, daughter of an affluent Iuka-area planter.
As relations between the North and South worsened during the late 1850s, Aughey remained a staunch Unionist. And when war was declared, he declined either to hold his tongue or leave Mississippi and move north.
That landed the Rev. Mr. Aughey in a good deal of hot water. He was still preaching, serving as head of the Rienzi Female Institute near Jacinto, Mississippi, and expressing himself freely when he was arrested as a Union spy during the summer of 1862 and imprisoned at Tupelo.
He escaped from prison once, but was captured, returned to Tupelo and placed in manacles. Reportedly three days away from a date with a hangman’s noose, he managed to escape again --- and this time reached safety. Aughey and his family then were escorted out of the South by Union troops, eventually reaching his father’s home in Ohio.
Aughey wrote “The Iron Furnace,” an account of his trials and tribulations in Mississippi, the Tupelo prison in particular, while recuperating in Ohio, then went on to serve two years as a Union chaplain.
After the war ended, Aughey resumed the Presbyterian pastorate in Indiana, Pennsylvania, West Virginia and other states before accepting the call to Chariton during the 1880s.
While at Chariton, the first edition of “Tupelo” was readied for publication during 1888. A second edition was published during 1905 when Aughey again was living in Lucas County.
It was during the Augheys’ first stay in Chariton that their daughter, Gertrude, became acquainted with John H. Stanton, a member of one of the city’s leading families of physicians.
The Augheys left Chariton during the late 1880s, moving first to a pastorate in West Virginia; then during 1891 to Oklahoma territory as missionaries. John became pastor of the Presbyterian church at Mulhall, Oklahoma, during 1892 but continued to serve a broad area of the state.
“He has probably organized more churches and done more to extend the cause of Presbyterianism in this territory than any other minister here,” The Mulhall Enterprise reported in 1907.
During 1894, Gertrude Aughey and Dr. John Stanton were married in Chariton, providing the link that brought the John H. Augheys back to Lucas County as he neared retirement from the active ministry at the turn of the 20th century.
By 1907, the couple had moved to Newton, New Jersey, to take advantage of services offered at the new Merriam Home for Aged (Presbyterian) Ministers, opened during 1903 in the former mansion of its benefactor, Henry Merriam.
The couple lived there comfortably until his death on July 30, 1911. Mary (Paden) Aughey died at the Merriam Home during 1921. Both are buried in the Newton Cemetery.
Although the Augheys had three children, their son and a daughter had died as young adults. Their daughter, Gertrude Stanton, and granddaughters were the only immediate survivors.
Posted by Frank D. Myers at 6:15 AM

This article was most interesting to me. I live aprox. 60 mi. from Tupelo,Ms. Parents born-raised in Lucas Co. Iowa. I was raised in Il. Moved to Ms. 2 1/2 yr. ago upon marriage. We pastor a church in Iuka, Ms.
Thanks again for posting on fb. where we may enjoy places and people otherwise never known to us.
Judy Cavett Stafford

Not to be a downer, but John would come back to Paden, MS to Paden family reunions long after the war, and could not talk about anything but the war and his anger. They all thought he was a little off. He was, during the War, in the middle of his strong Confederate in-laws at Paden in Tishomingo Co, MS. In reading his books, it is strange that he seemingly had no empathy for his wife's elderly parents whose home and mill, along with everything they owned, were destroyed. John's wife and children had actually been living with them when it happened. My ancestor was brother to Aughey's father-n-law. Rebecca B. Moss, Iuka, MS

Death in the Mines

The Ku Klux Klan in Lucas and Wayne Counties, Iowa 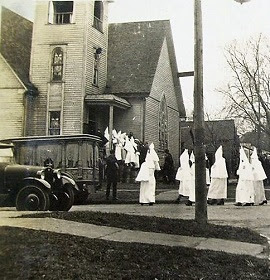