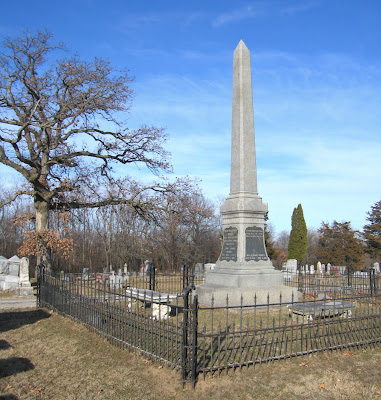 Gen. Francis Marion Drake and his family are buried in the shadow of this mighty obelisk on the highest point in Centerville's Oakland Cemetery.
It’s always fun, if you’re a fan of cemeteries, to set your sights on the biggest or tallest or flashiest tombstone in whatever boneyard you happen to be visiting, then see who’s underneath it.
In Centerville’s Oakland Cemetery, the honor for the biggest and best on the highest patch of ground goes to Gen. Francis M. Drake and his family. 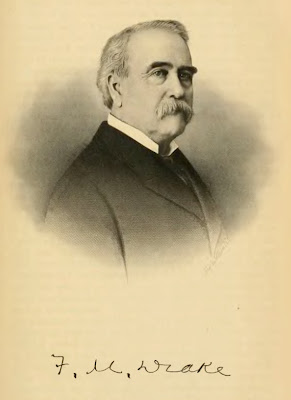 Don’t recognize the name? If you’re an Iowan, think Drake University. Once one of southern Iowa’s richest and most influential men, Gen. Drake funded The Rev. George T. Carpenter’s 1881 dream of moving a struggling Oskaloosa college to Des Moines and turning it into a beacon of higher liberal education open to both men and women as well as to people of all races. So one of Iowa’s premiere private universities was born and, because he paid for it, promoted it and believed in it, bears his name.
If you’re fond of Iowa history, you’ll also know that Drake was Iowa’s 16th governor.
Drive around in Centerville and you’ll pass the Drake Public Library, built by Gen. Drake as a gift to his community in 1901-2, recently restored and still at the heart of the community, located on Drake Avenue, named, of course, after Gen. Drake.
What you won’t find is the Drake mansion, however, once also located on Drake Avenue. The first of those burned to the ground in the early 1890s. It’s 1892 replacement --- bigger and grander --- was torn down by a daughter in 1957 and replaced by a smaller and more manageable house on the site. (See W.M. Heusinkveld’s excellent 2004 “Historic Homes of Centerville, Iowa,” for more details).

Sadly, the sun was in the wrong place when this photo was taken so you can't read Gen. Drake's inscription. He died Nov. 20, 1903.
What a guy. One of the interesting things to note is how tightly woven he was into the community he helped to build and where he lived until he died. There used to be more of that going around and nearly every Iowa town once had its equivalents of Gen. Drake. The big money these days seems to be in the hands of people more remote and frequently impossible to place who now and then scatter a few millions to the masses from some remote Mt. Olympus.
Centerville’s still extremely fortunate because it has a successor to Gen. Drake in Morgan Cline, an Appanoose County boy (Exline) who went east to make his millions but never really left home. He’s invested millions in his home county just because he wanted to during recent years --- quite probably turning the tide against economic decline.
Did I mention that Morgan is gay? Inconvenient that, considering the current Republican rampage at the statehouse. Albia --- another southern Iowa success story and possessor of one of the finest restored town squares in the country --- had one of those, too --- Bob Bates, whose money and drive made much of it possible. That’s inconvenient, too.
I keep telling folks that the key to renaissance in any small town is a queer gazillioneer native son or daughter who is willing to work hard and spend freely. A voice crying in the wilderness these days.
But this is about Francis M. Drake and, so far as we know, he was straight.
+++
Drake was born in Dec. 30, 1830, in Illinois. During 1837, he came to Fort Madison with his parents, John Adams and Harriet Jane (O’Neal) Drake. In 1846, the Drakes moved west to Davis County and founded the town known as Drakesville before moving on to Centerville in 1876.
Francis, not only a born leader but also a born money-maker, crossed the plains twice by ox-train during the California gold rush years, taking along a herd of cattle to sell both times. Sailing home to Iowa after the last trip (in 1854), he went down with the steamer Yankee Blade in the Pacific, but somehow survived and was picked up along the coast five days later.
Commissioned first a captain and then a major during Civil War service, he was made lieutenant colonel on the 36th Iowa Volunteer Infantry in 1862, serving outstandingly until April of 1864 when he was badly wounded and captured at the disastrous Battle of Marks' Mills. Paroled because he was expected to die, he recovered instead, rejoined his command and because of his gallantry was brevetted brigadier general.
Returning home to Centerville, he made millions in mercantile, railroad and banking enterprises. Married to Mary Jane Lord in 1855, they became the parents of six children who reached adulthood.
Elected governor in 1895, he served one term, but fell on the capitol steps and broke a hip, causing him to decline to seek another term.
Gen. Drake died at home in Centerville on Nov. 20, 1903, and a special train was added from Des Moines to Centerville to transport all the mourners. And then he was buried here beside his wife and a deceased infant son. Three other children now rest with their parents on the Drake lot.
One of the scary things involved in thinking a little about Gen. Drake happens when you start considering Iowa’s recent crop of governors and wondering if the name of anyone comparably worthy of being remembered will crop up. Terry Brandstad, good God no; Chet Culver, certainly not; Tom Vilsack, no again; Bob Ray --- well maybe. What in the world is happening to us? 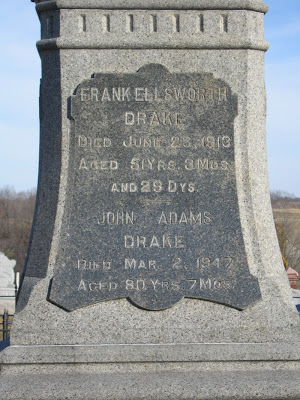 Two of Francis M. and Mary Drake's sons also are memorialized on the family obelisk. 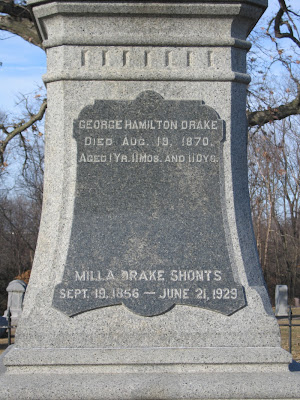 And the inscriptions of a daughter and an infant son are on another face of the tombstone.
Posted by Frank D. Myers at 5:32 PM