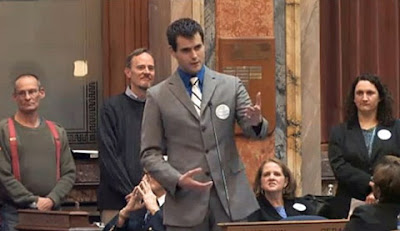 Zach Wahls' eloquent defense of his two moms' marriage, as well as marriage rights for all Iowans, has by now gone viral. Presented during Monday night's public hearing in Des Moines that preceded Tuesday's affirmative vote in the House on the proposed Christian/Republican anti-marriage amendment to Iowa's Constitution, Zach's words were, to put it mildly, memorable.
So it was interesting to see and hear Zach, his moms, Terry Wahls and Jackie Reger, and his sister, Zebby Wahls, on last night's msnbc The Last Word with Lawrence O'Donnell.
Zach is, I suspect, a spokesmen for the majority of Iowans his age and younger --- for whom LGBTQ people are neither a danger nor anything especially remarkable and who do not find any sort of threat in same-sex marriage --- or their queer friends and neighbors.
And that's one of the reasons why the backlash against the 2008 Iowa Supreme Court ruling that legalized same-sex marriage has turned so hateful --- the right wing of the Christian church and the Iowa GOP, which it controls, are horrified of losing control.
The Rodgers and Hammerstein musical South Pacific was a favorite of mine growing up (sadly, I did not hang onto the vinyl album), and one of the songs in it that stuck in my head was "You've Got to be Carefully Taught," sung by Lieutenant Cable. Here are the lyrics:
You've got to be taught
To hate and fear,
You've got to be taught
From year to year,
It's got to be drummed
In your dear little ear
You've got to be carefully taught.
You've got to be taught to be afraid
Of people whose eyes are oddly made,
And people whose skin is a diff'rent shade,
You've got to be carefully taught.
You've got to be taught before it's too late,
Before you are six or seven or eight,
To hate all the people your relatives hate,
You've got to be carefully taught!
The focus of "You've Got to be Carefully Taught" was racism, and the song was widely criticized by Christians and legislators from both parties (this was before Democrats shook out their racist element into the open arms of the GOP keep in mind); the fear, that the lyrics might encourage racial mingling and even, God forbid, mixed-race marriage.
The lyrics apply to LGBTQ people, too, however, and that's the key to much right-wing angst --- hate still is being taught in church and around dinner tables, but fewer and fewer youngsters are paying attention. Without hate, Christians might have to turn to love and Republicans, to constructive and progressive legislation. God forbid.
Posted by Frank D. Myers at 6:44 AM

Unknown said...
This comment has been removed by the author.
11:04 PM