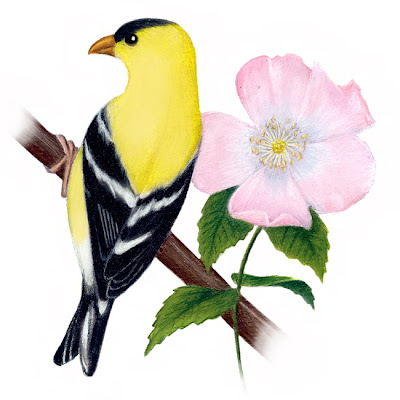 Iowa's House passed a same-sex marriage ban Tuesday, but the Republican plan to declare open season on goldfinches (our state bird) so we can use the twittering little bastards for target practice has stalled.
Well, the proposed constitutional amendment banning same-sex marriage, civil unions and the like passed Iowa’s House 62-37 yesterday --- and God sent a blizzard. I told ya She was gonna be pissed.
GOP-sponsored legislative proposals to redefine the goldfinch as a game bird (so we can target-practice on the twittering little bastards), require photo-identification to insure residency before use of public restrooms and fence the state to keep those damned liberals out all have stalled, however, at least for now.
On another matter, Republicans, sensing a threat to their genetic orientation, have fallen in line to defeat a Democrat House proposal to make stupidity a capital offense, punishable by stoning. That may be revived in the Senate.
Clarinda Republican Rep. Rich Anderson explained his vote for the same-sex ban this way: "See, a male and a female can do something that a homosexual couple cannot: They can create children accidentally. That's the issue. It's not about love. It's not about romance. It's about driving state policy toward responsible procreation." Huh?
Anderson, by the way, has submitted his name as a candidate to fill one of three vacant Iowa Supreme Court seats.
Whatever the case, the issue now appears to be dead for the remainder of the session (although we’re still in for a good deal of Christian/Republican screeching and hollering). Senate Majority Leader Mike Gronstal, bless his heart, remains firm in his determination to prevent the amendment from coming up, something he can do. 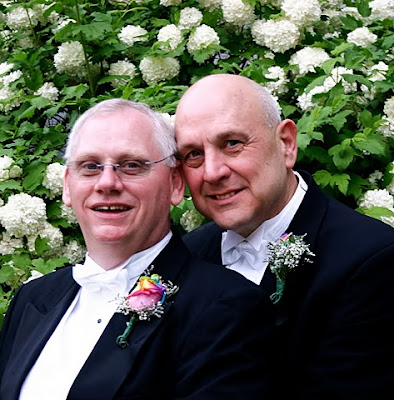 Gary Swenson (left) and Death Genth were married in Mason City by the Rev. Mel White not long after same-sex marriage became legal in Iowa.
Watching video clips taken during Monday night’s public hearing on the same-sex measure, it was good to see Mason City’s Dean Genth among those testifying against the proposed amendment. Dean and his husband, Gary Swenson, are amazing guys. One of the first things they did after moving to north Iowa some years ago was to organize a chapter of Parents and Friends of Lesbians and Gays (PFLAG), one of the most useful organizations out there for gays and straights alike. Dean also has been active in Soulforce, an LGBT faith-based advocacy movement. He’s also stubborn as the dickens --- in the nicest possible way; but not someone to be trifled with. I’m proud to know them both.
I was especially impressed by the Monday night presentation of 19-year-old Zach Wahls, a native Iowan raised by two moms and now a University of Iowa engineering student. Looks like he turned out darned good.
That’s the great thing about LGBT parents --- there’s no need to call on the state to promote responsible procreation where we’re concerned. Gay men and women are there in many cases to rescue and nurture kids discarded by irresponsible breeders. And considering the hoops that have to be jumped through in order to become a gay parent biologically, each child conceived can be guaranteed he or she is wanted and is off to a running start in the parental love department.
Posted by Frank D. Myers at 6:59 AM