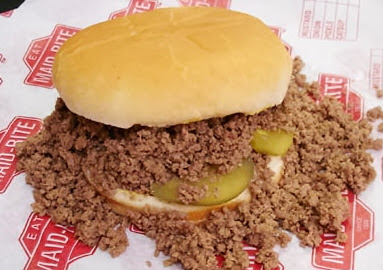 There is at least one positive thing to say about Governor-elect Terry Branstand's inaugural on Friday --- free Maid-Rite sandwiches will be served during an open house from 2 to 4 p.m. at the Capitol. That will be tasty, but messy. Hopefully guards will be present to keep the masses and their sandwiches off the carpet in the House and Senate chambers. 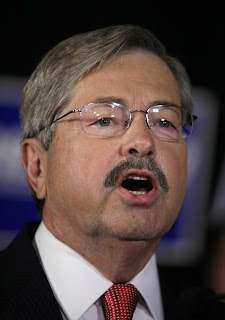 Maid-Rite sandwiches are an especially messy variety of loose ground beef sandwich served up by a Des Moines-base franchise in small restaurants across the state. Many, including me, are devoted to them although they're not really that tasty (must be eaten with pickles and mustard in order to be palatable).
They're also extremely difficult to eat --- loose meat flies in all directions. So you can't just pick one up and chomp it down. A spoon and bib are required, at the least.
Sadly, Chariton no longer has a Maid-Rite. We've got to drive to Osceola for our closest fix.
+++
Terry B. will be sworn in during ceremonies beginning at 9 a.m. Friday in Des Moines and the media are reporting that his speech will focus on sacrifice and service. Brandstad reportedly has been meditating on the fact this is the 50th anniversary month of John F. Kennedy's memorable inaugural address. Isn't it odd that Republicans now feel comfortable invoking the name of a guy they once dismissed as if not the Antichrist certainly his ambassador?
It's not clear who will be expected to sacrifice. State employees I'd guess. Those dependent on social welfare programs most likely. It's unlikely much will be expected south of Grand and in equivalent more contemporary McMansion neighborhoods. All that good stuff's got to trickle down from somewhere after all.
+++
Inaugural events will kick off this evening with an interfaith "dedication" service at St. Ambrose Cathedral. That's fine, I guess, since the majority of those attending probably will be praying to the Republican god. At least the big guy won't be confronted by mixed-message prayer missiles shooting heavenward. There should be consensus --- smite the Democrats, smite the queers, smite those illegal immigrants, keep the poor in their place (and God bless that grand old party).
+++
Over in the House chamber, it appears that the effort to impeach Iowa's remaining Supreme Court justices has stalled and won't make it out of committee. That effort, a continuation of the drive to punish justices who agreed unanimously that Iowa's constitution did not preclude same-sex marriage, was launched by three freshman and one veteran House Republicans. But even Branstad, after some hesitation, has declared impeachment a bad idea. Just wait until the next election and use the retention ballot again to cast more of the devils out, he says.
It still looks like a constitutional amendment to ban same-sex marriage remains at the top of the Republican legislative agenda, so that should be fun.
Democrats, I'm told, have abandoned plans for a dueling amendment that would have preserved the sanctity of marriage by defining it as a union of two men, two women or registered Democrats of any gender mix. The idea was to halt reproduction of Republicans since, as we all know, they do not engage in sexual relations outside the bonds of holy matrimony. This would have forced them to recruit, something that LGBT people can tell you has never worked out well.
But common sense prevailed. After all, at least one in 10 of the infants tossed into GOP arms turns out to be gay, at least four out of 10 turn out to be Democrats and a good percentage of the rest declare as independents once weaned. So nature seems to be able to deal with this issue quite effectively without legislative intervention.
Meanwhile, Bob Vander Plaats kicked off his 11-week statewide "Building Momentum Tour," intended to fire up conservatives to demand impeachment of those previously mentioned Supreme Court justices and build support for the Republican anti-gay constitutional amendment, in Leon and just down the road in Corydon yesterday.
Vander Plaats is described in some circles as a "soldier for Christ" --- something that tends to make the dark side look substantially more appealing.
Posted by Frank D. Myers at 7:03 AM

Not sure where the nearest Maid-Rite is but we do have 'The Canteen' in Ottumwa which I think is better than Maid-Rite and you always get a spoon with your burger.