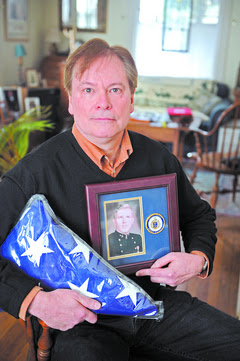 Mark Ketterson holding his late husband's photo and funeral presentation flag.
Finally (for today), follow this link if you like (it will be temporary) to a story in this morning's Chicago Sun-Times about one of the gay couples married in Iowa after the Iowa Supreme Court ruled unanimously two  years ago that our Constitution's equal-rights clause guaranteed that right.
You may remember the shrill voices on the Christian-Republican right after that decision, warning us about the homosexuals who would destroy the state morally by traveling here to get hitched.
Although this story is bittersweet (one of the husbands has died), the characters of these guys probably are representatives of the LGBT men and women who have taken advantage of Iowa's marriage laws --- a far cry from the cariicatures sketched by the wicked lies of self-appointed holy warriors.
John Fliszar was a 1971 graduate of the U.S. Naval Academy at Annapollis who served two tours as a Marine aviator in Vietnam. His surviving husband is Mark Ketterson, a Chicago social worker.
The other part of the story involves how well and with what respect Ketterson was treated by the U.S. Navy and the Naval Adademy as he worked, with marriage license in hand, to fulfill his husband's last wish --- that his ashes be interred in the Academy columbarium, which they now have been.
That respect probably is indicative of reaction among our troops as Don't Ask Don't Tell is erased in the military during upcoming months. What an insult to men and women in the military to imply, as some have done, that they will behave in any manner other than honorably.
Remembering that racial integration was imposed on the military by Harry S. Truman's 1948 executive order rather than by legislation, I got to thinking about how Iowans would have voted on that issue if given the chance. My guess is that it would have been "no" to integration. What a stain on our character that would have been. It'll be interesting to see what happens if  Iowans get the chance to vote on another civil rights issue, the right to marry.
Posted by Frank D. Myers at 5:53 PM

Cedar Rapids recently lost a significant contributor to the community, a true nice guy, and an acquaintance of mine. He was among those married under the new same-sex ruling. He died of a heart attack and complications of surgery.
http://accesslineiowa.com/index.php?option=com_content&view=article&id=1334