The bend toward justice 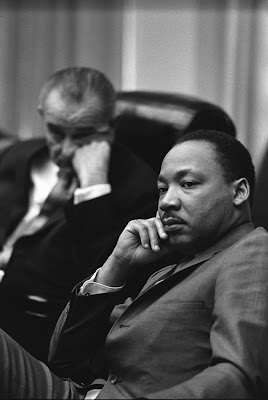 Paul Mayer, former priest and veteran activist, focused his Martin Luther King Jr. Day meditation this year on words spoken by King at the end of the third march from Selma to Montgomery on March 25, 1965:
"We must come to see that the end we seek is a society at peace with itself, a society that can live with its conscience. That will be a day not of the white man, not of the Black man. That will be the day of man as man. I know you are asking today, 'How long will it take?' I come to say to you this afternoon however difficult this moment, however frustrating the hour, it will not be long, because truth pressed to earth will rise again.
How long? Not long, because no lie can live forever.
How long? Not long, because you will reap what you sow.
How long? Not long. Because the arc of the moral universe is long but it bends toward justice."
That night, Ku Klux Klan members assassinated Viola Liuzzo, a white woman from Detroit who had driven south in support of the battle for civil rights and was transporting freedom marchers from Montgomery back to Selma.
+++
Dr. King’s “I Have a Dream” speech, delivered on the steps of the Lincoln Memorial on Aug. 28, 1963, probably will be quoted most often today.
I thought of lines from that speech last week while watching President Barack Obama deliver his eloquent message of hope in Tucson. Who would dared have dreamed back then, other than perhaps Dr. King, that a black man would be leading the nation in mourning.
We’ve gained some ground. But that arc of the moral universe still seems awfully long.
Who would also have dreamed then, too, that we would still be so divided, society still so riddled with hatred and senseless violence; semi-automatic weapons conveniently available to deranged young men on big-box shelves; the air filled with divisive words intended to inflame.
+++
Overt racism involving black people is perhaps diminished and certainly in many instances more subtle today. But a friend just back from Houston talked yesterday of the shift he has noted in that south Texas city to overt racism directed toward brown people, expressed in terms of protecting the sanctity of our borders. Similar trends can be noted in Iowa, too.
And of course we hear the daily hateful words directed toward LGBT people, often expressed in terms of protecting the sanctity of heterosexual marriage.
Were Dr. King still with us, he would be standing with his brown and queer brothers and sisters I think. His widow, the late Coretta Scott King, certainly was.
+++
Martin Luther King Day is an odd holiday, sparsely observed or not observed collectively at all around here. The haters hate it; the indifferent are indifferent to it.
But we should pay closer attention and remember, too, that Dr. King was above all else a pacifist, abhorring violence of any sort, and that he stood in solidarity not only with his black brothers and sisters but with all who were oppressed, especially with the poor. He took the words of Christ seriously, something most Christians rarely do --- and remains a hopeful symbol for the church badly in need of one, a reminder that occasionally great good can rise from it.
It really does seem sometimes that “truth pressed to earth” really does rise again and that the moral universe’s bend toward justice, although excruciatingly slow, is perceptible.
I’m not convinced, but Dr. King's life and example continue to offer a degree of hope.
Posted by Frank D. Myers at 7:13 AM