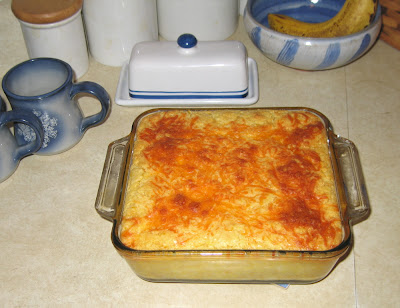 It is a little-known fact that scalloped corn, properly prepared and administered, can cure the common cold. And that if enough people sat down at the same time to eat scalloped corn there would be world peace. It is a wonderful dish for troubled times.
So here's my recipe --- it travels well, so is good for potlucks. It stands up nicely under refrigerated conditions and reheats easily either in microwave or oven. And it was a big hit at Thanksgiving dinner this year and has been so in the past.
1 stick of butter
1 small to medium onion diced
1 can whole-kernel corn with liquid
1 can cream-style corn
3 eggs beaten
1 package Jiffy corn muffin mix
1 cup sour cream
1 cup grated cheese
Melt butter in large pan and sautee onion in it until translucent then remove from heat. Add corn, muffin mix and beaten eggs, mix in sour cream. Pour into greased baking dish and top with cheese. Bake for an hour in a 325-degree oven. What could be simpler?
+++
So do you call it "scalloped" corn or "escalloped" corn? Escalloped sounds more elevated, but if tracked back to French origins seems to have something to do with a small slice of meat cut into then cooked in the shape of a shell --- and that relates to the mollusk with a wavy fan-shaped shell called scallop. That's why if you sew and "scallop" the edges of a piece of fabric, it has wavy edges. So was the first corn casserole (or casserole of any other sort called "scalloped") cooked in a scallop shell? Who kows.
+++
I'm wondering if several big servings of scalloped corn would do anything for the consistent bad temper of the Rev. Fred Phelps and his merry band, now planning to picket the funeral of Elizabeth Edwards on Saturday in Raleigh. Probably not.
Old Fred reminds me of a wonderful story I read one time (and failed to note the precise source of) written by someone who grew up in Mormon family in Utah, I believe. Mama, in this family, always tried to live on the sunny side and it became something of a family joke that no matter how awful the person whose name entered dinner table conversation was, she would find something nice to say about him or her. So the kids decided to trick her into saying something kind about the Devil --- and succeeded.
Now I'm not implying that Fred is the Devil personified, but the reactions to him are interesting. Conservatives and liberals alike probably could reach rare agreement in this instance that if they were God, they'd smite that old sucker and send him off to a richly-deserved reward, perhaps involving fire and brimstone. You'll note God hasn't done that. But good old Fred has somehow sparked rare consensus. Point one.
Point two: The news these days about Fred doesn't usually involve actual protests, just the Wichita ramblers' plans for same. What usually happens is that once protests are announced, large groups of people from diverse backgrounds and viewpoints get together, peacefully (in most instances) surround the protesters (if they bother to show up) and stifle their message.
Fred's incivility in overstating his case in the culture wars involving those of us who are gay, lesbian, bisexual or transgender may actually have nudged the larger conversation slightly in the direction of civility. Even the most conservative preacher, contemplating Fred's example, at least thinks twice nowadays before shooting off his mouth. There may be just a little more verbal "love" out there directed toward us sinners and a little less "hate" toward our perceived sins. Number three.
Finally, if you are LGBT, who could ask for a better friend than Fred? He's probably done more to edge uncommitted fence-sitters with no particular stake in any holy war in the direction of inclusion than several dozen liberal preachers could accomplish. But the good Lord sure does move in myserious ways sometimes.
There now, I've said four nice things about Fred Phelps. I attribute it all to scalloped corn. If I had the old reprobate's address I'd send him the recipe.
Posted by Frank D. Myers at 7:34 AM

I love scalloped corn but have never known how to make it. I'll have to give your recipe a try.

It Phelps was smote, I wouldn't shed a tear.

Scalloped corn is one thing I always contribute to our Thanksgiving dinners. Too bad I'll have to wait so long to try your recipe. It sounds wonderful. Of course, being an Iowan, I firmly believe corn is nature's perfect food!

The first dish I look for at a community potluck or family gathering is scalloped corn. I adore it! I'm familiar with your recipe, Frank, but without the onion. I like to add crumbled, crisp bacon to the top of mine. The Southerners on the t.v. cook shows I love to watch call the dish corn pudding. Whatever you call it, I'm betting I can't get it off my mind now until I've gone to the market for the fixin's.